Birth of a new astronomy.

The field of gravitational-wave astronomy, a new tool for listening to and understanding the cosmos, is now a reality following the detection of gravitational waves by researchers at the Laser Interferometer Gravitational-Wave Observatory (LIGO) in the USA.

“The window to this new world of gravitational waves has just been cracked open,” David Shoemaker, project leader for Advanced LIGO and director of the LIGO Lab at the Massachusetts Institute of Technology (MIT), told a US Congressional panel in February.

Shoemaker and other members of the LIGO Scientific Collaboration spent much of the month of February celebrating the announcement and explaining to the public what this new tool means for humanity and science. 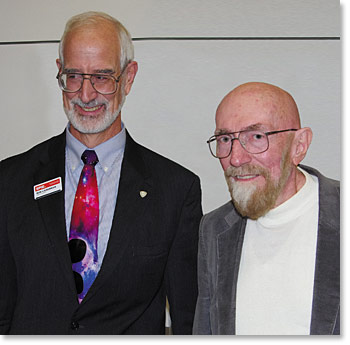 The observation of ripples in the fabric of space-time arriving at Earth from a cataclysmic event in the distant universe, which occurred in September 2015, confirms a major prediction of Albert Einstein’s general theory of relativity. Einstein predicted in 1915 that if the gravity in an area was suddenly changed by an event such as an exploding star, waves of displaced energy would ripple through the universe at light speed, stretching and squeezing space as they moved along. LIGO captured the sound of two black holes colliding 1.3 billion years earlier.

“With this discovery, we humans are embarking on a marvelous new quest to explore the warped side of the universe, objects and phenomena that are made from warped space-time,” said Kip Thorne of the California Institute of Technology, part of a team that proposed the LIGO in the 1980s.

“Colliding black holes and gravitational waves are our first beautiful examples,” he said. “Until now, we have only seen warped space-time when it is very calm, as though we had only seen the surface of the ocean on a very calm day,” and as though no one had ever seen ocean waves rolling and crashing in a powerful storm.

As the window to this new world opens wider, Shoemaker added, “we’ll be rewarded with discoveries that will give us all a thrill of understanding things much bigger than ourselves.” 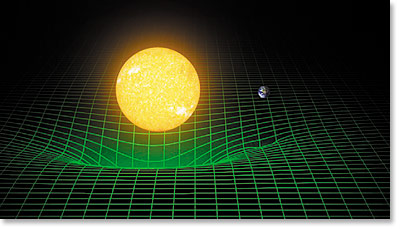 The green grid represents how our sun and Earth warp space and time, or space-time. As Albert Einstein demonstrated in his theory of general relativity, the gravity of massive bodies warps the fabric of space and time, and those bodies move along paths determined by this geometry. His theory also predicted the existence of gravitational waves, which are ripples in space-time. These waves, which move at the speed of light, are created when massive bodies accelerate through space and time.
T. Pyle/Caltech/MIT/LIGO Lab
ASTRONOMY GROWS EARS

Scientists around the world compared the ability to detect gravitational waves to a deaf person suddenly being able to hear sound.

Gravitational waves act in space much like radar or sonar does on Earth. Through the waves, scientists can listen in on the universe, much like dolphins use sound to “see” underwater.

According to LIGO scientist Szabolcs Marka, everything in astronomy is like the eye. For centuries, telescopes have given stargazers increasing access to the electromagnetic spectrum, expanding the ability to see deeper into time and space.

Astronomy has finally “grown ears,” Marka said. “We never had ears before.”

Scientists hope the study of general relativity via gravitational waves will help them learn more about gravitons, the particle believed to carry the gravitational force, just as the photon carries the electromagnetic force.

Gravitational waves will allow astronomers to make more precise measurements of how fast the universe is expanding and how much dark energy exists in the universe. Scientists can also get a closer look at what happens when a supernova occurs and the gravitational collapse afterwards that creates extremely dense neutron stars.

Find more information on the discovery, including SPIE.TV videos from the LIGO facility in Hanford, WA.