Tracing the origin of key metals used in optoelectronics.

The offices, cleanrooms, and conference floors of the photonics industry seem a long way from metal mines and murder in the Democratic Republic of Congo (DRC). The link between optics and more than 5.4 million people estimated to have died as a result of DRC’s ongoing humanitarian crisis may not be immediately obvious.

But they are connected, thanks to the global web of trade and the US Dodd-Frank Wall Street Reform and Consumer Protection Act.

Dodd-Frank makes the US Securities and Exchange Commission (SEC) responsible for regulating disclosures about the tin, tungsten, tantalum, and gold in optoelectronics that might originate from the DRC or adjoining countries. Intended to limit cash flow to armed groups in DRC, the law’s impacts reach far beyond US borders, and not only because Europe is also considering similar regulations.

The Dodd-Frank requirements don’t prevent the use of conflict minerals, but the disclosure requirement means the entire industrial supply chain must know where these so-called 3TG metals come from. Publicly traded US companies first had to comply with its requirements in their 2013 financial reports.

As firms prepare to include these details in their filings for the third year, it’s time to ask questions. Where do the 3TG rules stand? How do they affect optoelectronics companies? And are they working? 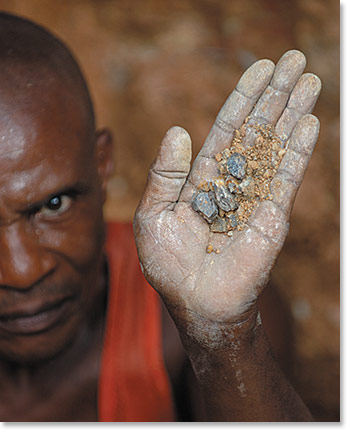 A miner in Kailo, DRC, with some wolframite, the mineral source of tungsten. Photo: Julien Harneis
STATUS OF THE SEC RULES

The conflict-minerals rule was challenged shortly after the SEC issued it in 2012. It required companies whose products contain 3TG metals to make “reasonable country of origin inquiries,” according to Dynda Thomas, a conflict minerals expert and partner at law firm Squire Patton Boggs (below, right).

In many cases, the companies would then have to conduct due diligence about the source and chain of custody of their 3TG. Were any metals not shown to be from reputable sources, companies would have had to describe the affected products as “not found to be DRC conflict free.”

However, in April 2014, a US Court of Appeals panel suspended this requirement in response to a suit led by the US National Association of Manufacturers.

“The court concluded that compelling companies to make that statement would violate their First Amendment rights,” Thomas says. But the need to investigate the supply chain remains, and it’s still possible that an effort to restore the statement requirement will be taken to the US Supreme Court.

“At this point, we still don’t know whether that First Amendment ruling will be finally upheld,” Thomas adds.

If the EU does adopt its own rules, that will greatly expand the number of companies that actively gather and provide information, she says.

“Over time, more of their customers will probably have a ‘DRC conflict-free’ policy or goal, and optoelectronics companies will need to have visibility throughout their supply chains in order to qualify as suppliers,” Thomas says.

Rosemarie Szostak, senior analyst at the research and advisory firm Nerac, has been working to help companies meet the SEC’s regulations. She emphasizes that full compliance would call for great vigilance and cost because of the ubiquity of 3TG metals in many electronics products and processes.

Gold coatings for mirrors and gratings are a common application of conflict metals in optoelectronics, she notes. Tin is used as a solder in mounting devices, and tantalum is also important in the manufacture of capacitors.

The rule’s relevance to optoelectronics can be seen in the conflict-minerals reports from Avago Technologies in California (USA). Selling a variety of relevant products, including LEDs and fiber-optic components and subsystems, Avago’s conflict-minerals policy focuses on checking its suppliers’ sources of 3TG minerals.

“We do not typically have a direct relationship with 3TG smelters and refiners,” the company writes. “Avago’s relevant suppliers are required to implement measures to prohibit the purchase and use of conflict minerals” from the DRC and adjoining countries that “fund armed conflict in those countries.”

Avago wrote that it intended to implement steps to further mitigate the risk that conflict minerals that are necessary to the functionality or production of products could “finance or benefit armed groups in the DRC.”

ARE THE CONFLICT-MINERALS RULES WORKING?

The motivation to audit the supply chain is reduced by the minor consequences of not complying with the regulations, Szostak admits. “Right now, all companies have to do is say ‘Oh, well. We tried and we didn’t find anything,’ ” she says. The SEC has limited taxpayer funds for monitoring and enforcement, while the Court of Appeals ruling made it easier for companies not to do anything substantial, Szostak says.

“They do not have to say ‘mea culpa’ to their shareholders or customers,” she says because the SEC mandates only that they make their best effort.

Still, some companies are embracing the spirit of the law. “They are spurred by Dodd-Frank to clean up their supply chain,” Szostak says.

Szostak’s experience has led her to call Dodd-Frank’s conflict-mineral provisions “a can of worms.” At best it’s unleashed problems that are not easily solved, and at worst it’s not working at all.

“They’re using a regulation in one part of the world and expecting it to favorably impact another part,” she says. It’s impossible to control the outcome of such measures, Szostak adds. “The use of in-country oversight, security forces, and assistance to local miners has reduced the illicit mineral trade slightly since the enactment of Dodd-Frank, as noted in the November 2015 US Government Accountability Office (GAO) congressional testimony.

“But in the DRC, there are bad people, and they’re not going to let up, no matter how much you try to regulate their source of funding away,” she says.

Douglas Hileman, a Los Angeles consultant whose firm performs audits outlined in the SEC’s conflict minerals rules, emphasizes that the measures overall might be working.

Hileman, who served on conflict-minerals panels at SPIE Photonics West in February and in 2015, points to an August 2015 GAO report that found 1,321 companies filed “specialized disclosure” conflict-minerals reports in 2014. This was substantially lower than SEC’s original estimate of 6,000 companies that could possibly be affected by the rule, though SEC officials said that estimate was intentionally overly inclusive.

The GAO report also found that 67% of companies that did file reports were unable to determine the country of origin of the 3TG metals they had used. Another 24% said their metals did not originate in the DRC or its neighbors, while just 4% said that they did.

The remaining 5% either used recycled material or didn’t provide a clear determination.

Hileman notes that the GAO report also found a statistically significant decline in sexual violence in the DRC between 2007 and 2013-14.

“This is the only objective, published report of a statistically based study I’m aware of,” he says. 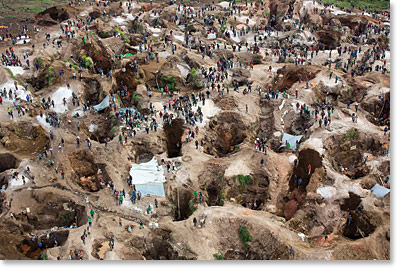 The Luwowo mine near Rubaya in North Kivu, DRC, has been validated as having conflict-free minerals such as coltan and tantalum.
Photo: © MONUSCO/Sylvain Liechti.
SUPPLIERS HEED MORE THAN LAW

Although the SEC is currently unlikely to enforce 3TG rules aggressively, those companies either not filing, “egregiously flouting” requirements, or making unsupported conclusions do risk SEC action, Hileman says.

“The quality of these submissions is also being reviewed and analyzed by non-governmental organizations and other parties,” he adds. “Consequences of inadequate SEC filings can also include adverse publicity.”

For companies in the supply chain, including the majority of affected companies in the photonics industry, non-responses or inadequate reporting risk unwanted attention from customers, or even losing customers.

Hileman urges optoelectronics manufacturers to consider the full societal context of the regulations.

“It is tempting to look at a single court decision or legal opinion as the defining answer for conflict minerals, or to achieve legal compliance,” he says. “As a matter of practice and risk management, this is just one of many drivers in the landscape of new, emerging, and stricter requirements for management, oversight, and reporting related to the supply chain.

“This one happens to be very visible right now because it’s an SEC rule, and because some of the requirements are in flux.”

Michele Harms of Finisar also served on the panel at Photonics West, which was moderated by Lydia Hultquist of the Silicon Valley Conflict Minerals Forum.

–Andy Extance is a freelance science journalist based in the UK. A version of this article appeared in the Photonics West Show Daily in February.