Offices and laboratories for optics and photonics professionals are great places to work because of the respect from coworkers, opportunity for advancement, paid vacation, and flexible work hours, according to the 6th annual SPIE Optics & Photonics Global Salary Report. And it’s a bonus that the pay is so good.

The 2016 salary report, mailed to SPIE members with the April issue of SPIE Professional, shows respect from coworkers ranked as the top benefit of an ideal workplace, followed by opportunity for advancement, flexible work hours, paid vacation, and high pay in fifth place.

The median salary for full-time employees in optics and photonics is $62,443, according to the new SPIE report, down slightly from $64,000 in 2015. The aerospace sector was again found to offer the highest median salaries, $102,300.

The survey also showed other areas of high job satisfaction in the field of optics and photonics, with 96% of respondents saying they enjoy their work, 95% finding their work meaningful, and 93% feeling respected by their peers.

Median pay was lowest among workers in China, Poland, India, Romania, Russia, and Ukraine, with a low of $2,740 a year in Ukraine and $5,520 for all lower-income countries in Europe.

SPIE CEO Eugene Arthurs said the survey “confirms the health of the optics and photonics field even as the global economy sputters.”

However, the gender pay gap “is still a disgrace, although the history of male domination in science and engineering explains part of it,” he said.

The survey found that women, who made up 17% of the respondents, continue to earn less than men overall in optics and photonics. The median annual salary for women was $48,000, compared to $66,240 for men.

The 38% gender gap is much smaller for early-career professionals with less than five years of employment, however, and reversed in lower-income countries in Europe and in civilian, non-research government jobs.

Asked about whether they feel they are paid fairly, 69% of women responding to the survey said yes, vs. 76% of men.

Arthurs said future surveys will continue to look at whether there is gender parity for recent entrants to the field.

The survey found the highest-paying disciplines have much higher representations at for-profit companies. For example, of the people working in the top three disciplines by pay (aerospace, illumination, and semiconductor), 401 work at for-profit organizations vs 96 in government or the military, and 75 in academia.

Other key findings from the survey that was administered in January:

Early results of the survey were presented at SPIE Photonics West in February where a panel of early-career professionals working in industry agreed that coworkers’ passion, teamwork, and collegiality make for an excellent work environment.

Coworkers show their respect for each other by being reliable and willing to help others solve problems, even when not assigned to a project, the panelists said.

“I am doing my best when I know someone is depending on me,” said SPIE member Nishant Mohan, director of product management and marketing at Wasatch Photonics’ Systems Division. 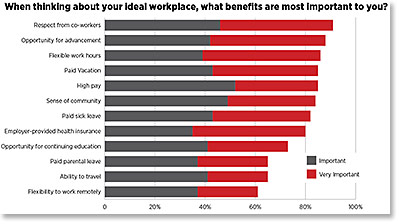 SPIE member Christina Willis, a laser scientist at Fibertek who was also on the panel, added, “You can love your work, but if your co-workers are mean to you, you’re going to hate going to work.”

The third panelist, Aaron Weinroth, vice president of technology commercialization at Tornado Spectral Systems, said he was a bit surprised that high pay was ranked only fifth on the list of top work benefits, especially since an employer doesn’t control relationships among coworkers.

Still, Weinroth said, employers need to foster a culture of mutual respect and provide opportunities for professional development. “People have to show respect for each other,” he said.

Indeed, Arthurs commented that the “intangible rewards of being in optics and photonics do not show up in our survey. These include having knowledge and skills for a field with a very bright future, and for many, the satisfaction in contributing to enhancing life on our planet.”

WHAT DO WOMEN NEED IN THE WORKPLACE?
ALLIES AND MENTORS

Having strong allies or mentors can help women in workplaces where inclusiveness isn’t always practiced. That was the consensus of panelists at an SPIE Women in Optics event during Photonics West in February.

The discussion about trends in female participation in the technology sector was moderated by Lina Nilsson of Enlitic and University of California, Berkeley and included Rachel Thomas of Hackbright Academy, Y-Vonne Hutchinson of ReadySet, Karla Monterroso of CODE2040, and Omoju Miller of Learners Guild.

“I don’t think people realize how much Rome is burning,” Monterroso said about the slow progress in recruiting and retaining women and minorities in science, technology, engineering, and math (STEM) roles.

Panelists and discussion participants agreed that women must take ownership of the problem and make a conscious commitment to create an inclusive culture in the workplace, especially by mentoring each other.

“It is imperative to be that resource for someone else,” Hutchinson told the standing-room-only crowd. “If you’re in the position to mentor, mentor.”

The salary report is available online at the SPIE Career Center.