The 2016 Frits Zernike Award for Microlithography was presented at SPIE Advanced Lithography in February to SPIE Fellow Yan Borodovsky, who retired last year as director of advanced lithography at Intel (USA).

Borodovsky was recognized for his work in advancing multigenerational lithography process solutions and his key contributions to patterning approaches and layout design rules.

As an Intel Senior Fellow, Borodovsky was responsible for directing multigenerational advanced lithography definition and progress in the Technology and Manufacturing Group. He was involved in the development of lithography tooling and advanced patterning techniques since first joining Intel in 1987 as a staff engineer. 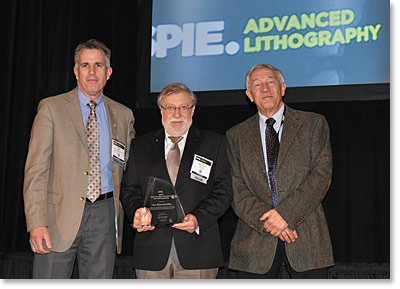 “Yan has influenced nearly every lithographic innovation for the last two decades at least,” said David Shykind, a staff process engineer at Intel. “You could say he has a nose for what will allow us to keep photolithography relevant to semiconducting patterning as we fight to remain on the density curve of Moore’s Law.”

“With a combination of such techniques, he will continue to play a key role in pushing Moore’s Law well into the sub-10nm region over the next decade or two,” Williamson said.

SPIE presents the Frits Zernike Award annually for outstanding accomplishments in microlithographic technology, especially those furthering the development of semiconductor lithographic imaging solutions. The award is sponsored by ASML and includes a $2,000 honorarium.