Optical coherence tomography (OCT), a technology already widely used in ophthalmology and other medical fields, holds potential to reveal how blood flows in the brain during stroke, providing information that could someday guide new treatments and reduce stroke-induced damage to the brain.

A recent article in the journal Neurophotonics describes work at the University of Washington (UW) using OCT to render high-resolution images and information about blood-flow dynamics over a broad region of the brain before, during, and after stroke-like states. 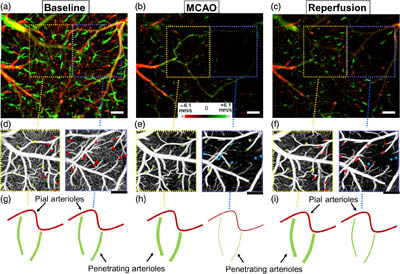 “OCT is a well-established medical imaging technique that uses light waves to generate three-dimensional pictures of tissue structure,” said SPIE Fellow Ruikang Wang, professor of bioengineering and ophthalmology at UW. “Widely applied over the past two decades in clinical ophthalmology, it recently has been adapted for brain vascular imaging.”

In “Vasodynamics of pial and penetrating arterioles in relation to arteriolo-arteriolar anastomosis after focal stroke,” Wang and coauthors Utku Baran and Yuandong Li describe their use of OCT-based optical microangiography (OMAG) to reveal detailed brain-vessel dynamics during real-time experimental stroke.

(Figure above shows regions where arteriolo-arteriolar anastomosis is relatively stronger or weaker, holding potential to reveal how blood flows in the brain during stroke.)

Wang has been a leader in developing OCT to measure microvascular angiograms and is now applying the methodology to explore the microvascular dynamics of blood vessels in the brain during stroke.

The new application “enables the imaging of far more vessels in a shorter period of time and offers a greater depth penetration,” noted Neurophotonics Editor-in-Chief David Boas of the Massachusetts General Hospital and Harvard Medical School.

Not only were the UW researchers able to achieve high-resolution images of in vivo vascular networks across a large area, but they also were able to evaluate the vessel diameters, red-blood-cell velocity, and total blood-flow change across the area.

In doing so, Wang said, they demonstrated a biologically initiated rescue mechanism in response to stroke. The new information could potentially provide guidance to clinicians treating stroke patients.

“Our key finding uncovers a non-uniform regulation event in penetrating arterioles — variance in the dilation among important vessels circulating blood throughout the brain,” Wang said. “Specifically, active dilation of penetrating arterioles during stroke requires strong connections — anastomosis presence — and dilation and therefore blood flow fail in the areas farther away from an anastomosis.

With the enhanced imaging capability, Wang and colleagues may discover as-yet-unknown mechanisms by which the brain regulates blood flow to brain tissue, Boas said.

“OCT, which already is a billion-dollar industry, is likely to go on to play an increasingly important role in the neurosciences,” Boas said.

The work was supported in part by grants from the US National Institutes of Health.