Highlights from Journal of Biomedical Optics

Researchers at University of Illinois at Urbana–Champaign and at Chicago have tested a new optical method for diagnosing breast cancer that could lead to an automated process for rapidly and more accurately determining whether breast-tissue lesions are benign or malignant.

In a recent special section of the Journal of Biomedical Optics, Hassaan Majeed, a PhD candidate in bioengineering at Urbana–Champaign, and colleagues describe their use of quantitative optical-phase measurements for cancer diagnosis.

When an abnormality is discovered during a screening procedure such as a mammography, standard practice is for the physician to take a tissue biopsy, which is then stained using hematoxylin and eosin (H&E). The staining provides enough contrast for a pathologist to study key morphological features of the tissue under a microscope.

The tissue analysis is done manually; because of variations in things like staining intensity and the illumination used, the process does not lend itself to automation. Manual inspections are also subject to investigator bias, and the process is time-consuming. This can, in some cases, result in late disease diagnosis — a critical shortcoming given that early diagnosis is said to significantly improve chances of survival. 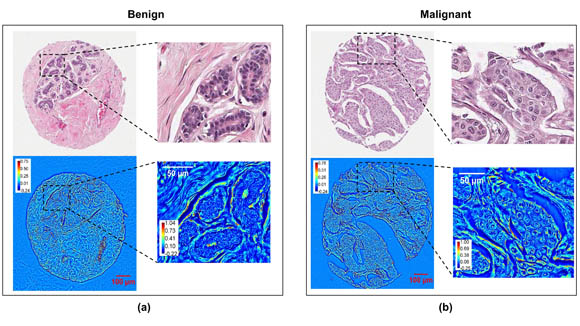 On this SLIM image, areas with different refractive properties appear in different colors. The boundary between the tumor and its extracellular environment is clearly delineated, making it possible to assess whether the tumor is malignant.

As part of the experiment, two board-certified pathologists were trained to interpret the tissue morphological details from SLIM images by being shown H&E and SLIM images of the same tissue cores, labeled benign or malignant, side by side.

At the testing stage, each pathologist was first shown the stack of SLIM images for 109 selected tissue cores. The pathologists classified each core as either benign or malignant. Then the process was repeated for the stack of H&E images for the same 109 cores. Using each pathologist’s diagnosis of the H&E stained cores as the gold standard, the researchers measured the success of diagnosis using SLIM images by counting the number of agreements between SLIM- and H&E-based diagnoses.

Because this diagnosis method is based on quantitative data, rather than on a pathologist making a subjective assessment, the researchers believe that these preliminary results show the potential of their technique to become the basis for an automated image-analysis system that would provide a fast and accurate diagnosis.