Device could replace implants and frequent finger pricking for diabetics.

A team at University of Leeds (UK) has developed a new laser sensor that monitors blood glucose levels without penetrating the skin. The new technology, developed by Professor Gin Jose and associates at Leeds and licensed to GlucoSense Diagnostics of London, uses a small device with low-powered lasers to measure blood glucose levels rapidly and noninvasively.

With a recently acquired patent covering the core optical technology for the glucose sensor, company representatives say they hope to launch a finger-touch device and a separate wearable device within three years.

Once available on the commercial market, the laser sensor could potentially transform the lives of an estimated 382 million people living with diabetes.

“This could give people a simpler, pain-free alternative to finger pricking, squeezing drops of blood onto test strips, and processing the results with portable glucometers,” Jose said. “Our technology has continuous monitoring capabilities [that] could help improve the lives of millions of people by enabling them to constantly monitor their glucose levels without the need for an implant or frequent invasive tests.” 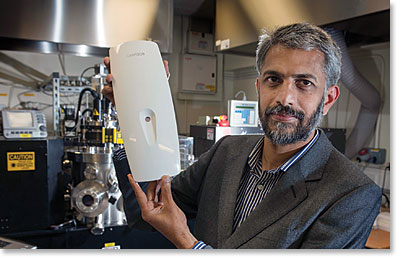 At the heart of the glucose sensor is a piece of nano-engineered silica glass, embedded with ions that fluoresce in infrared light when illuminated by low-power laser light. When the glass is in contact with the users’ skin, the extent of fluorescence signal varies in relation to the concentration of glucose in their blood.

The device measures the length of time the fluorescence lasts and uses that to calculate the glucose level in the bloodstream, a process that takes less than 30 seconds.

Jose added that the glass used in the sensors is durable and similar to that used in smartphones. As a result, “our device is more affordable, with lower running costs than existing self-monitoring systems,” he said.

"We are currently piloting a benchtop version in our clinical investigations, and we aim to develop two types of devices for the market,” he said. “One will be a finger-touch device similar to a computer mouse. The other will be a wearable version for continuous monitoring.” 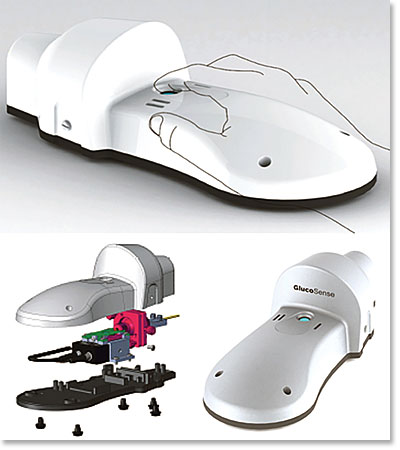 GlucoSense’s “prototype I” is a benchtop device designed to validate the noninvasive technology.
Courtesy Glucosense

The Engineering and Physical Sciences Research Council is funding a £1.4 million pilot manufacturing facility at Leeds for scale-up and is scheduled to be ready by 2016.”

The results of a pilot clinical study conducted at the Leeds Institute of Cardiovascular and Metabolic Medicine and supervised by Peter Grant, professor of medicine and diabetes specialist at University of Leeds, suggest that the new glucose monitor can perform as well as conventional technologies. More clinical trials and product optimization are required for regulatory approvals.

Noninvasive monitoring will be particularly valuable for people with Type 1 diabetes, Grant said. “Within this group, those attempting precise control such as pregnant women or people experiencing recurrent hypoglycemia could find this technology very useful.”

There are about 400,000 people with Type I diabetes in the UK alone.

Glucosense Diagnostics is a spinout company jointly formed and funded by the university and NetScientific, a biomedical and healthcare technology group. It announced in July the award of the first critical European patent covering the core technology for the glucose sensor.

Sir Richard Sykes, chairman of NetScientific, noted that because diabetes is a growing problem, the need for noninvasive glucose monitoring has become more urgent. “This technology could help empower millions of people to better manage their diabetes and minimize interventions with healthcare providers,” Sykes said.

Jose said the developers believe that the global market for this capability is currently worth at least £6 billion per year and that the device might be used to measure other conditions besides diabetes.

“In the longer term, we believe we can develop other sensors to identify stroke risk and other cardiovascular potential problems,” Jose said. “We are applying for further research funding to develop such applications.”

Do you have a story to contribute about how optics and photonics technologies benefit humanity or the global environment?

Do you have a question or comment about articles in the SPIE“Photonics for a Better World” series?

Write to us at spieprofessional@spie.org. We'd love to hear from you.