Cleaner air and purer water are the aim of two projects under way in Europe.

In one, people in several major cities get to be citizen scientists as they participate in iSPEX-EU, a program that recruits volunteers to measure air pollution using their smartphones.

The iSPEX-EU project, from 1 September to 15 October, is one of many activities celebrating the International Year of Light and Light-based Technologies (IYL) and was organized by LIGHT2015, which is funded by the Horizon 2020 research and innovation program.

Like the Dutch iSPEX project, which was successfully trialed in the Netherlands in 2013, iSPEX-EU involves distributing thousands of small “spectropolarimeters,” which, in combination with a smartphone camera, becomes an optical sensor capable of measuring the macro- and microphysical properties of atmospheric aerosols. These particles can be natural, as in sea salt or ash from forest fires, or man made from automotive traffic and industrial pollution. 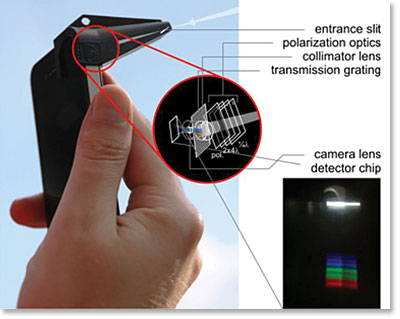 The iSPEX add-on turns a mobile phone into an optical sensor capable of measuring the macro- and microphysical properties of atmospheric aerosols.
© iSPEX-EU
CITIZEN SCIENTISTS TAKE AIR MEASUREMENTS IN EUROPE

The iSPEX add-on measures the spectrum and degree of polarization in visible light with SPEX – the Spectropolarimeter for Planetary Exploration – designed to measure atmospheric particles.

Participants are instructed to scan a cloud-free sky at various times of day while their smartphone’s built-in camera takes pictures through the iSPEX add-on. These measurements provide information on the amount of particles in the air, their size, type, and distribution — all crucial aspects in determining the impact of atmospheric aerosols on environment and health.

The iSPEX not only enables crowd-sourced measurements of atmospheric aerosols at locations not covered by current air-pollution monitoring systems, it also makes atmospheric science accessible to almost anyone through active participation in taking scientific measurements.

In a recent SPIE Newsroom article, “Core-shell nanostructures with promising photocatalytic characteristics,” the researchers conducted a series of UV irradiation tests as part of the Water Project, which supports applications of nanotechnology for water treatment.

Semiconductor photo-catalytic processes have shown great potential as a water-treatment technology to remove persistent organic compounds and micro-organisms in water. However, drawbacks that limit their application for large-scale photocatalytic processes include a high recombination rate of photogenerated electron-hole pairs and poor recovery after water treatment of the catalyst particles.

Their research offers ways to overcome these drawbacks, making the technology more affordable for people in developing countries, where there is inadequate access to clean water and sanitation.

“The project’s findings are significant because water is the second-most important problem facing humanity, after energy,” notes Water Project coordinator Vittorio Privitera. “With this project, we are trying to address this mammoth challenge.”

The CNR-IMM team plans to conduct further studies to optimize the photocatalytic activity of synthesized nanostructures. The researchers also plan to investigate the antibacterial activity of their materials against Escherichia coli, a common indicator of fecal contamination in water.

Do you have a question or comment about articles in the SPIE “Photonics for a Better World” series?