Scientists from Fraunhofer IOF are recipients of the 2014 Rudolf Kingslake Medal and Prize.

Five researchers from Fraunhofer Institute for Applied Optics and Precision Engineering (Fraunhofer IOF) (Germany) are recipients of the 2014 Rudolf Kingslake Medal and Prize.

This annual prize is for the most noteworthy original paper on theoretical or experimental aspects of optical engineering published in Optical Engineering, the flagship journal of SPIE.

The paper introduces a new array projector for high-speed 3D shape measurement. This alternative method of measuring uses aperiodic sinusoidal fringes instead of the well-known phase-shifted sinusoidal fringes and Gray code patterns. The LED-based multi-aperture projection system is suitable for high-speed measurement of object topographies since it enables pattern projection with frame rates of several 10 kHz.

The authors note that in their previous work, they used the phase-shifting fringe projection in conjunction with Gray code. Since the phase difference between the sinusoidal patterns varied strongly with the projection distance, measuring ability was restricted.

The new setup features “nine aperiodic sinusoidal fringe patterns with spatially varying offset, amplitude, period length, and phase shift, consecutively projected onto the object to be measured, which is observed by two calibrated cameras,” the authors write. They solved the stereo-correspondence problem with the help of the temporal-correlation technique.

After verifying the accuracy of the array projector, the authors needed to prove its capability for high-speed 3D shape measurement. Their first measurements at 3-kHz projection frame rate resulted in a 3D frame rate of >330 Hz. The measurement of a test plane (a flat piece of granite painted white) showed the standard deviation as ~100 µm. 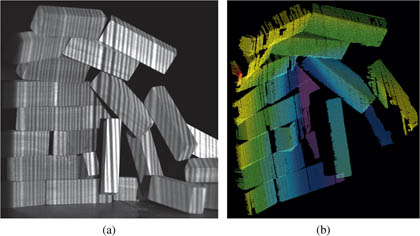 The high-speed capability of the setup was verified by taking measurements of a collapsing wall made of wooden toy blocks (above).

SPIE Fellow Tomasz Tkaczyk, chair of the Kingslake Award committee, said the array projector demonstrates a new paradigm in that the proposed method “enables higher projection frame rates and the ability to accurately measure the variable topography of 3D objects at high speeds.”