Seeds sown in 2015 will flower after IYL ends.

The International Year of Light and Light-based Technologies 2015 (IYL) will be brought to an official close during a ceremony to be held over three days in Mérida, Mexico, 4-6 February 2016.

This final event of the 2015 IYL celebration will be attended by the key figures behind the international year, including academics, international diplomats and decision-makers, CEOs, and science and industry leaders from around the world.

Launched in January 2015 at a Paris ceremony attended by more than 1000 participants, the global initiative has been a year of great learning, exposure, insight, and appreciation of the importance of light and optical technologies for the development of society.

IYL events and actions have reached millions worldwide, making it one of the most successful international science outreach actions ever. The closing ceremony will review the year and its successes and focus on ensuring an enduring legacy.

While the United Nations-decreed observance has been very effective in raising awareness about photonics and the benefits of light-based applications, those gains should only serve to encourage more activity, said SPIE CEO Eugene Arthurs.

“There is still much that needs to be done, to end light poverty and make good on the promise of shared prosperity throughout the world,” he said.

SPIE, as one of 12 founding partners of IYL, has cosponsored numerous events during the year. Arthurs, SPIE President Toyohiko Yatagai, SPIE President-Elect Robert Lieberman, and other SPIE leaders have promoted improved public and political understanding of light-based technologies to educators, scientists, government officials, business executives, and others through conferences, displays, hands-on activities, and other outreach activities. 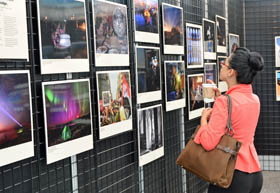 SPIE provided prizes of US $4,500 for the SPIE International Year of Light Photo Contest and displayed the photos at many events and in several publications throughout the 2015.

Many of the submitted photos depicted LEDs, communication devices powered by photonics, lasers, solar panels, and other important uses of light in medicine, culture, economic development and art.

“The IYL has offered the optics and photonics community an opportunity to celebrate the extraordinary contributions to health, longevity, communications, social interaction, entertainment, and economic prosperity,” Arthurs said.

The year has also been one of revisiting the history of humankind’s ongoing attempts to understand and use light, Arthurs said, mentioning the accomplishments of the Neolithic people who built Newgrange in Ireland, the early Greeks and Chinese, and the great advances in the Islamic world during the Dark Ages.

“We hope some young people have been excited and will consider contributing to further building civilization, to sustaining our world, with light,” Arthurs said. “We hope that many in our community have an expanded view of their contributions, a new pride in how the science and engineering of light has contributed so much, and of the potential.”

He noted that many of the actions taken during IYL would be like seeds that will flower in future years.

IYL EVENTS IN US AND SPAIN

Three IYL events in September supported by SPIE were among hundreds this year that served that purpose.

SPIE cosponsored an exhibition in Spain celebrating 12 women researchers who contributed to fundamental discoveries in optics and photonics, and the Society cohosted two events in Washington, DC.

The Washington events were organized by the National Science Foundation (NSF) in conjunction with SPIE and other US science organizations to promote the progress and promise of light research and education.

A daytime event, Wonders of Light: Family Science Fun, provided educational activities demonstrating the science of light for more than 500 school-age children and their parents.

Hands-on activities featured an LED-orb that changed color with music, an interactive video game using sensors, and a “green screen” enabling participants to simulate being a science reporter for a day.

The evening event, Light for a Better World: A Celebration of US Innovation, was a public symposium attended by more than 200 people, including NSF Director France Córdova, who gave the opening remarks.

Other talks were by Michael Liehr, CEO of the recently established American Institute for Manufacturing Integrated Photonics (AIM Photonics), and:

• Shuji Nakamura of University of California, Santa Barbara and a 2014 Nobel Prize recipient, who spoke on the development of the blue LED

• Eric Betzig of the Howard Hughes Medical Institute, another 2014 Nobel Prize recipient, who discussed the role of telescopes and microscopes in understanding our universe and ourselves

• Gerald Duffy, GE Lighting manager who spoke about how solid-state lighting has transformed our world

The “Women in Light Sciences” exhibition was launched during the opening of the Spanish National Meeting in Optics in Salamanca and organized by the Spanish Society of Optics (SEDOPTICA) and the Women in Physics Group of the Spanish Royal Society of Physics.

The 12 women highlighted in the exhibition included Nobel Laureate Maria Goeppert-Mayer and Jean McPherson Bennett, an authority on precise methods for measuring optical surfaces, who received the SPIE Technology Achievement Award in 1983. 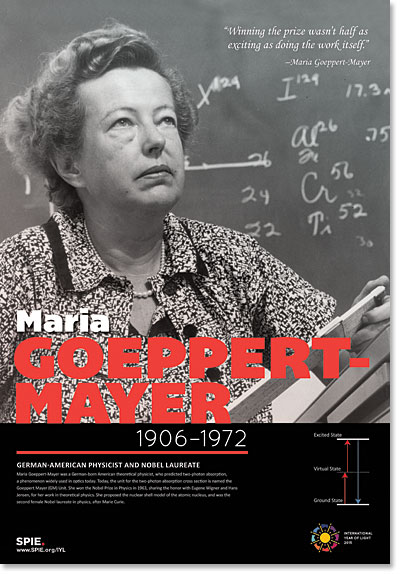 Mérida, Mexico, where the IYL closing ceremonies will be held in February 2016, is close to the Mayan archaeological site of Chichen Itza and one of the earliest astronomical observatories there, El Caracol.