A photo of a 5-year-old boy studying in a dark hut, with only natural morning light streaming through a small window, has been selected for the People’s Choice Award in the SPIE International Year of Light Photo Contest.

Handi Laksono, a travel and landscape photographer from East Java, took the photo 1 September 2014 after hiking three hours to the remote village of Wae Rebo on Flores Island in Indonesia. 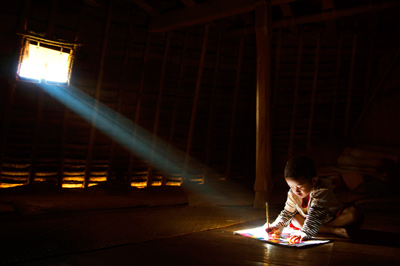 The village is known for its traditional Manggaraian architecture consisting of five-level, conical-shaped buildings called mbaru niang that are completely wrapped in thatched leaves from the surrounding tropical jungle.

As is the case for 1.5 billion people around the world who lack access to electricity, there is little to no electricity for the residents of Wae Rebo. The only lighting sources in the village are from the sun and small solar panels attached to the top of some houses.

Laksono says the solar panel in the house he visited powers a single light bulb that is turned on only from 6 to 9 pm. “For the children who wish to study in their house in the morning, the light from the small windows is the [only] option,” Laksono says.

Laksono told SPIE he intends to donate his prize money for the boy’s education.

SPIE Professional magazine sponsored the contest as part of the International Year of Light and Light-based Technologies (IYL), a global initiative adopted by the United Nations to raise awareness of how optical technologies promote sustainable development and provide solutions to worldwide challenges in energy, education, agriculture, communications, and health. SPIE is one of 12 IYL founding partners.

The year-long IYL celebration has reached many outside the optics and photonics community, showcasing the crosscutting discipline of science that has revolutionized medicine, astronomy, and clean energy; opened up international communication via the Internet; and continues to be central to linking cultural, economic, and political aspects of the global society.

More than 800 photos portraying light and light-based technologies in daily life were submitted to the contest. SPIE has provided prizes of US $4,500, including $500 for the People’s Choice Award.

Two panels of judges selected the first-, second-, and third-place photos from all submitted to SPIE in 2014, rating each photo on scientific interest, artistry, and other criteria including how well the image depicted the contest theme of light and light-based technologies in daily life. An additional 32 were picked as finalists for the People’s Choice Award.

British photographer Paul Reiffer won the top award for his image showing the vehicle, road, and other city lights on and around the Nanpu Bridge in Shanghai on New Year’s Eve.

Ian Bell’s third-place photo was a light painting of an athlete on a stand-up paddle board with LEDs strapped to his blade. 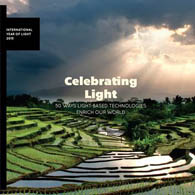 Laksono’s image is one of several from the IYL Photo Contest that were included in the SPIE Press book, Celebrating Light: 50 Ways Light-based Technologies Enrich Our World. The book was produced for the IYL and is being distributed for free at many SPIE events.

The photo selected for the People’s Choice Award is also one of many submitted to the contest illustrating the importance of light for education and the lack of clean, efficient forms of lighting in many developing communities. One of the major themes of the IYL is to promote the use of portable, solar-powered LED lanterns in regions where there is little or no reliable source of light after sunset.

The majority of children in developing countries are expected to work during the day to help provide for their families, according to the IYL website. “With no or inadequate light at night, these youth are unable to read or write, and thus deprived of an education,” the website says.

Lack of electricity in Wae Rebo is one reason that children are sent to live at the nearest village, nine kilometers away, to attend school during the week. The child in Laksono’s photo, identified only as Andi, will be sent to the school when he reaches the age for elementary school.

Wae Rebo received an award of excellence in the 2012 UNESCO Asia Pacific Heritage Awards for a community-led rebuilding and conservation project that led to five new mbaru niang structures.

Voters in the People’s Choice Award competition who provided an email address were entered in a drawing for a GoPro camera. Christina Hall of Williamsburg, VA (USA), received a GoPro Hero and a headstrap for participating in the public vote.

Recent News
The eyes of a submarine
Technology
Found in translation
Community
Water muting with THz optoacoustics: a breakthrough for biomedical applications
Publications