Scientists across the world celebrated history in July when NASA’s New Horizons spacecraft flew close enough to Pluto to capture the first-ever, up-close images of the distant dwarf planet.

The interplanetary space probe came within 7800 miles (12,500 k) of the planet’s frozen surface. The stunning images are giving researchers new insights into Pluto — a mystery since its discovery in 1930 by Clyde Tombaugh.

The impressive information gathered is due in part to a suite of instruments including ultraviolet, visible, and infrared imaging spectrometers. The optical instruments aboard New Horizons captured images showing that Pluto is younger, slightly larger, colder, and far more complex than had previously been thought. Pluto is so small and distant that even the Hubble Space Telescope was unable to capture a clear view.

Images from New Horizons have provided the first good look at Pluto’s icy mountains, including one range that is similar in height to the Alps or the Rocky Mountains, possibly less than 100 million years old, making them younger than the Himalayas. 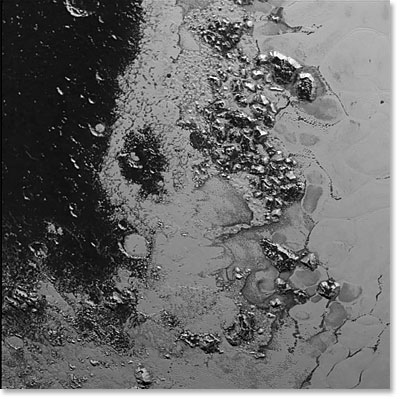 Pluto also has an apparently less lofty mountain range on the lower-left edge of its best-known feature, the bright, heart-shaped region named Tombaugh Regio. These frozen peaks are estimated to be one-half mile to one mile (1-1.5 kilometers) high, about the same height as the Appalachian Mountains in the eastern United States.

The lack of craters on several areas of Pluto’s surface indicates the dwarf planet is relatively young, but apparent signs of geological activity remain a mystery since Pluto is so far from the sun and the larger planets.

“This may cause us to rethink what powers geological activity has on many other icy worlds,” said John Spencer, deputy team leader of New Horizons’ Geology, Geophysics, and Imaging Team.

The piano-sized probe that flew by the dwarf planet weighed about 1054 pounds (478 kg) at launch. A plutonium-fueled radioisotope thermoelectric generator produces the 200 watts needed to power onboard computers, communications systems, and a set of compact, lightweight instruments, which includes two plasma instruments, a dust sensor, a radio science receiver/radiometer and three optical instruments.

LORRI, a long-range reconnaissance imager, is a 1000x1000-pixel sensor that, in combination with a telescopic camera, delivers monochrome images and high-resolution geological data. LORRI has measured Pluto’s diameter at 1473 miles (2370 km).

“This result confirms what was already suspected,” NASA reported. “Pluto is larger than all other known solar system objects beyond the orbit of Neptune.”

Two spectrometers aboard New Horizons, Ralph and Alice, are named after the 1950s couple on TV’s “The Honeymooners.” Together, they are known as PERSI, for Pluto Exploration Remote Sensing Investigation.

Ralph, the main “eyes” of the probe, is a visible and IR imaging spectrometer designed to deliver the primary images of Pluto and its five moons, allowing scientists to study their composition, geology, and morphology. Alice, a UV imaging spectrometer, is designed to gather information on the composition and structure of Pluto’s dynamic atmosphere.

The wealth of images and spectroscopic data are expected to reveal unprecedented details about the nature of the dwarf planet and other once-distant objects now in reach.

New Horizons has now moved beyond Pluto and is off to investigate more objects in the Kuiper Belt.

NASA plans to redirect the spacecraft in October to visit a small, icy body known as 2014 MU69, located nearly a billion miles farther into the Kuiper Belt region, beyond Neptune.

Scientists think that small bodies like MU69 were the building blocks for Pluto, the largest known object in the Kuiper Belt.