Two SPIE members whose work with terahertz quantum cascade lasers (QCLs) has advanced the field of THz photonics have received the inaugural SPIE Early Career Achievement Awards, one for an academic focus and the other for an industry focus.

Miriam Serena Vitiello, a staff research scientist at the National Research Council (CNR) of Italy and an assistant professor at Scuola Normale Superiore, is the recipient of the award in the academic category.

Alan Lee, founder of LongWave Photonics (USA), is the award recipient in the industry category.

SPIE established the Early Career Achievement Award in 2007, and the SPIE Awards Committee created separate categories for it in 2014, to honor SPIE members of distinction whose highest earned degree has been awarded within the previous 10 years.

SPIE Member Seongsin Margaret Kim, associate professor at University of Alabama (USA) and chair of the subcommittee for the SPIE award, noted it is a coincidence that the two award recipients work in similar areas of photonics.

“Both Miriam Vitiello and Alan Lee have deeply impacted the field of terahertz photonics and the terahertz community despite their relatively short professional careers,” Kim said. “Their selection for the SPIE Early Career Achievement Award is highly deserving and an indication of the upward trajectories of their careers, both in academia and industry.” 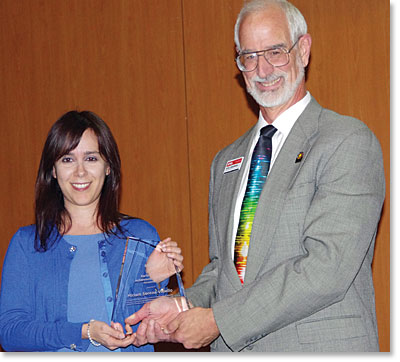 Vitiello is being honored for her pioneering research on semiconductor-laser sources and electronic high-frequency nanodetectors, which have opened new frontiers in the ThZ photonics and optoelectronics fields. Among her achievements are:

In recommending her for the award, SPIE Fellow Federico Capasso, a co-inventor of the QCL, noted that Vitiello pioneered the use of nanomaterials in the realization of THz devices.

“Using plasma waves in the channel of field-effect transistors, she developed the first FET detectors based on InAs nanowires and the first THz detectors made of graphene,” Capasso said. “Both these works initiated important new research directions. These devices can now operate at room temperature, up to frequencies above 3 THz, and have noise comparable with commercial technologies.

Applications for her cutting-edge technological advances in THz detectors and devices that generate THz radiation include metrology, sensing, and security.

Vitiello received her PhD at University of Bari (Italy) in 2006 and currently leads her own research group at CNR. She also coordinates the THz research line among three different CNR institutes in Italy and collaborates with other researchers in Europe and around the globe. A joint research project with Rutgers University in the USA, for instance, involves the transmission of THz radiation through hollow waveguides.

Vitiello is a member of the program committees for SPIE conferences on quantum sensing and nanophotonic devices (Photonics West) and THz emitters, receivers, and applications (Optics+Photonics) and has authored or co-authored some 70 peer-reviewed journal articles in nine years, including in Optical Engineering and the Journal of Nanophotonics.

She received her award at SPIE Optics+Optoelectronics in Prague in April.

Lee, who received his PhD in electrical engineering from Massachusetts Institute of Technology (USA) in 2010, founded the first company to commercialize a “turnkey” terahertz QCL system. LongWave, based in California, has developed product lines of QCL based systems for nondestructive testing; precision local oscillators for the remote-sensing and astronomy community; and laser spectroscopy.

In addition to commercial developments, LongWave has received funding from NASA and the National Science Foundation for work on non-destructive imaging using terahertz radiation, frequency-agile QCL sources, and local oscillator sources for astronomy.

He is being recognized for his early-career achievements on standoff-distance real-time THz imaging. The differential imaging technique proposed in his work formed the basic working principle of several commercial THz imagers/cameras.

Lee first demonstrated real-time terahertz imaging with terahertz QCLs and microbolometer cameras while working on his doctorate. Prior to this, nearly all THz imaging was performed using expensive Ti:Sapphire lasers, where the image was collected by scanning the sample to collect pixel-by-pixel data.

“The high power newly available from a THz QC-laser illumination source led to his clever new approach, where the laser output was modulated in sync with the camera frame rate, allowing THz images to be collected even with a large thermal IR background,” said Benjamin S. Williams, an associate professor at University of California, Los Angeles (UCLA) who worked closely with Lee when Lee was working on his MS at UCLA.

“Various imaging configurations were demonstrated, including stand-off imaging over 25 m, a non-trivial task considering the strong atmospheric absorption in the THz range. Along the way, his contributions have taken the THz QC laser from a not-particularly-useful device, to a viable component,” Williams added.

Both Williams and Qing Hu, Lee’s doctoral adviser at MIT, said Lee has excelled in both the technical and commercial realms. Hu noted that Lee has succeeded as a startup entrepreneur because of “his well-rounded skills in system-level engineering, integration of diverse technologies, identifying and securing potential customers and sponsors, and knowledge of intellectual properties.”