Community leaders in Africa are increasing the visibility of optics and photonics.

SPIE member Rim Cherif, associate professor at ISET’Com/Sup’Com, the Engineering School of Communications at University of Carthage (Tunisia), wants to ensure that her students get the same opportunities to pursue research as she did. She voiced this aspiration after receiving the 2015 ICO/ICTP Gallieno Denardo Award for young researchers from developing countries.

“In my country, there is little money to buy equipment for research and not many experimental facilities,” Cherif says. “You cannot only do theory and modeling in optics research; you have to somehow validate your work experimentally.”

One way Cherif works toward increasing opportunities for optics and photonics students and professionals is through collaboration with student organizations in Africa and the Optical Society of Tunisia (OST).

In 2009, Cherif spent three months with the Sandwich Training Educational Program (STEP), a fellowship program for PhD students from developing countries that is sponsored by the International Centre for Theoretical Physics (ICTP) and the International Atomic Energy Agency (IAEA). While participating in STEP, she observed activities of a few SPIE Student Chapters.

Once back home in Tunisia, Cherif conferred with SPIE Fellow Mourad Zghal (also of University of Carthage) about creating a student chapter devoted to optics and photonics. With help and advice from SPIE Fellow and past SPIE President María Yzuel, the SPIE Tunisia Student Chapter began.

It took about a year to convince students at Sup’Com of the benefits they would derive from volunteering with a chapter, she said. But by 2010, there were enough grad students to begin holding regular seminars with optics and photonics pioneers and bringing hands-on demonstrations of optical technologies to rural and underprivileged communities and schools.

Cherif and Zghal, who is cofounder and president of OST, now serve as advisors to the SPIE Optics & Photonics Tunisia Student Chapter, one of three SPIE Student Chapters in Africa. The others are the Council for Scientific and Industrial Research Chapter and Stellenbosch University Chapter, both in South Africa. 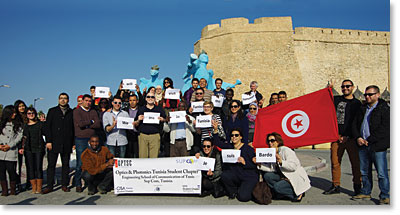 SPIE CEO Eugene Arthurs (at center holding “are” sign) and participants of the Lighting up Africa with Lasers, Optics, and Fibers event in March.
ACTIVITIES THROUGHOUT AFRICA

Cherif described the growth of optics education outreach activities by students in Africa in a paper for the 2014 Education and Training in Optics and Photonics (ETOP) conference.

“Expansion of student activities in Africa: from south to north,” coauthored with Sub’Com colleagues and participants in the other Student Chapters in Africa, discusses how chapter members developed technical and leadership skills while bringing optics education workshops to primary and secondary schools and through networking with peers.

Some of the students have traveled thousands of kilometers through South Africa and Namibia to bring interactive science lessons on liquid crystals, lasers, and other topics to rural schools, all with the goal of attracting more young people to a career in optics and photonics.

The Tunisian students presented some of the most successful outreach projects in 2014, she said, bringing demonstrations on reflection, refraction, and other optical phenomena to more than 200 secondary students.

The first African Summer School on Optics and Applications to Sustainable Development was a weeklong training program in 2013 that brought graduate and post-doctoral students together with scientists from around the world. It was organized by OST and supported by SPIE, ICTP, and several other organizations.

The OST has continued to develop workshops in Africa, such as “Shedding Light on the Contributions of Muslim Scholars to Science and Technology” in December 2014. Supported by SPIE and UNESCO, this workshop brought attention to significant optical innovations from the Golden Age of Islamic Sciences.

And earlier this year, the OST and the African Laser Center (South Africa) held the workshop, “Lighting up Africa with Lasers, Optics, and Fibers” in Carthage. Along with promoting optics and photonics education, this workshop addressed how light technology will be a key driver of innovation in the 21st century.

In September, the ICTP will sponsor the Advanced School and Workshop on Fibre Optics in Alice, South Africa. Zghal, one of the program directors, says the five-day workshop will connect scientists and students from across Africa on a topic that will have a great impact on scientific and economic development for the continent. Topics to be covered from 28 September to 1 October include material design, multiplexing, light transport, and the applications of fiber optics in communication and sensors.

Promoting optics and photonics in Africa is particularly important because the number of students selecting physics as a discipline is gradually dwindling in developing countries, and even in some developed countries, Zghal notes.

“African countries definitely need better-prepared researchers and teachers in optics and photonics to pass on their skills to younger generations,” Zghal says.

To meet this challenge, organizations such as the OST and the SPIE Tunisia Student Chapter are working with secondary schools to improve physics and math education in their country and interact with students to show the benefits and possibilities of careers in physics – with an emphasis on optics.

Zghal says it is “vital that the brightest young minds from all areas of the world continue to be attracted to careers in this field.”