How one industry association put New Mexico on the map.

There is a truism in politics and business: You get what you measure. Universities measure published papers. Businesses measure sales revenues and profits. Politicians measure voter sentiments, jobs, and tax revenues.

Herein lies the problem: You get what you measure.

Without a more exacting definition of what one measures, then by human nature, we create more of what we are being measured against, often degrading quality of the product. More papers will be published, but they may not be all high quality or scientifically relevant. More revenues may be collected, but they may result in more environmental waste. More jobs may be created but they may not be high paying.

Herein lies the opportunity: As an industry, we can determine definitions of quality, of “goodness,” and future economic impact and add that definition to the simple metric of jobs, revenues, and intellectual property. As an industry, we can help politicians see the significant impact of photonics – which creates life-saving technologies, cleaner products and manufacturing methods, and higher-paying jobs.

If you feel your government representatives do not care about your industry, it is because you have not yet made them care.

Your opportunity is to lead locally and make them care.

Photonics21 in Europe is a good example. The European photonics technology platform was founded in 2005 and quickly began representing the interests of the photonics community by publishing its research agendas and documenting the growth of the industry’s revenues, jobs, and impact on society.

Within four years, the European Commission had identified photonics as one of only six Key Enabling Technologies that play a major role in Europe’s economic growth and employment. Now, 10 years later, a photonics public-private partnership is set to invest 3.5 billion euros through the Horizon 2020 program to increase Europe’s share of the global photonics market.

The Colorado Photonics Industry Association (CPIA) in the United States measured the photonics impact on the state of Colorado in 1997 and in 2007. CPIA demonstrated company growth, job growth, and salary growth in just 10 years.

SPIE, on behalf of its membership, has launched a worldwide study of the photonics industry, with regular updates at photonics industry events. This data, along with support for the National Photonics Initiative, contributed to the November 2014 announcement that the US will create a public-private partnership for an Integrated Photonics Institute for Manufacturing Innovation (IP-IMI).

Measurement of specific jobs and specific economic benefits has led to incremental policy, taxation, and curriculum changes. We get what we measure.

What more could we get if we measured more carefully, more specifically, or more locally?

We took on the challenge in New Mexico, a US state made famous simply because many people did not know where it was. Selected to provide critical research and testing sites for the Manhattan Project during World War II because it seemed the best place to conceal the work of the most well-known physicists in the world, its reputation of being largely unknown continues to haunt the work of many a New Mexican technologist.

Due in part to the historical secrecy of the work conducted in the state and the technological complexity of the work, even the average New Mexican does not understand what is developed, built, or discovered at the state’s various research facilities, companies, universities, and laboratories.

In February 2015, the New Mexico Optics Industry Association (nmOptics) completed its efforts to identify potential photonics companies, survey the companies to increase the accuracy of the data, provide insights on increasing growth, and analyze the patent database for intellectual property segmentation. 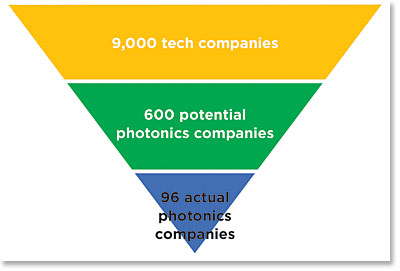 A study in New Mexico found that 96 of the 9000 technology companies in the state make optics and photonics products, technologies, or services.

This study, which you can download at nmoptics.org, found:

Armed with this concrete data, the photonics community within the state has been able to garner support at the highest levels.

Nearly one third of the photonics companies in New Mexico are component suppliers, while 61% develop or manufacture systems.

The state’s pledge of funding support for an IP-IMI facility, for instance, was helpful in the University of New Mexico and University of Southern California consortium being listed as one of three finalists.

Gov. Susana Martinez, in her letter of support for the IP-IMI, stated: “Accelerating the development of a robust photonics capability in New Mexico in the face of a photonics technology revolution is of great importance to New Mexico’s economic future. … New Mexico already boasts significant technological, physical, capital, and human resources, and we believe further public and private investment in the strategies presented in this proposal will yield a high return on investments in job growth and global economic competitiveness.”

Photonics also has been incorporated into the NM Science and Technology Plan with funding to accelerate the growth of photonics technologies within the state.

Patricia Knighten, manager of the Office of Science and Technology at the NM Economic Development Department, said her office has embraced photonics/optics as a priority focus in the state Science and Technology Plan. “The department has already secured funds for an innovation and commercialization pilot program focused on New Mexico photonics companies,” she said.

In addition, Knighten notes that nmOptics and the Office of Science and Technology will develop strategies to build on this program and “to fast track the development of a vibrant statewide photonics industry cluster.” Already:

Exciting developments happen when there is credible data to support a thesis. Our industrial and political leaders are determined to put New Mexico and its photonics industry on the map, at home and abroad.

The full report, Photonics in New Mexico: Diverse Industry Poised for Growth, was made possible by sponsorship from SPIE, the NM Manufacturing Extension Partnership (MEP), the city of Albuquerque, and nmOptics. Many people helped nmOptics with the research and analysis by working with us to develop a statistically significant and rigorous process, connecting the researchers to corporate leaders willing to answer proprietary questions, and offering guidance from prior experience.

What we learned developing these datasets, networks, and processes can be shared with other industry associations. In fact, as we were finalizing the report, other associations began calling us to learn how we did it, how much time it took, how much it cost, and other items “good to know” before starting their own analysis.

Here are some important things we learned.

Our discovery and negotiation period, from the initial inquiries to “explain” photonics to our actual kickoff date, took nine months. This time was well spent as we were able to garner attention for the study, interest in the final results, and participation from economic leadership.

The economic development leadership helped connect us to NM’s Bureau of Business and Economic Research, company management willing to share proprietary data, and to site leaders at the larger companies.

We had to accept that the data would not be perfect or complete.

For example, photonics is not part of a single economic indicator code, including the North American Industry Classification System (NAICS) of codes. The lack of reliable data and the difficulty of investigating companies will drive an engineer crazy. Act as if you are in marketing instead.

Our initial dataset of potential companies to investigate suffered from a number of concerns that you will no doubt face as well:

As the data gets better, the results are published, and the impact is made more broadly known, the data will get better and even the old data can be corrected.

nmOptics created a website for the project. As more people participated, they improved the quality of the dataset, added companies we had not been able to find, and created connections to decision makers we did not yet have.

The website enabled potential participants to see how we were managing the proprietary data. They could see how the project was shaping up and provided information so we all could get better data.

We have also been promoting our study in trade journals, SPIE cluster events, and other technology networking affairs.

The leveraging power of this data is that it can lead to changes in school curriculum, encourage business leaders to learn about local resources, and raise the awareness of legislators before they establish policies and regulations.

Since the publication of our report, New Mexico’s economic development leadership has incorporated photonics into the state’s Science and Technology Plan, added photonics to its list of trade-mission technologies, and is actively seeking to recruit more photonics companies to the state.

Companies involved in photonics within the state of New Mexico have been excited to learn how large the industry is. They are keen to expand their networks and find new collaborations and new ways of working together. There are also discussions on how to pool resources.

These are all benefits of knowing who else is working in their technology area in the state.

The end result for you and the photonics companies in your region?

You get more of what you measure. Data drives development, investment, and change.

Get the data that supports where you and your region need to go. Shine the light on photonics.

Facts about the photonics market

SPIE formed a team in 2012 to analyze and quantify the impact of photonics in the global market.

In the April 2015 issue of SPIE Professional, Stephen G. Anderson, industry and market strategist for SPIE, explained the methodology used to provide periodic reports on the global photonics market.

The SPIE team has created sales, production, and employment profiles of various sectors and will release more information at SPIE Optics+Photonics in August. Thus far, the team has found:

The primary purpose of the New Mexico study was to quantify the economic impact of photonics activity in the state and give policy makers and industry leaders insights into how the industry might grow.

This included collecting information on 9000 technology companies, six universities and colleges, federal labs in the state, and more than 1500 patents assigned to entities in New Mexico. The data were then analyzed to answer several questions, including:

–SPIE member Lynore M. Abbott is founder of Logical Marketing and vice president of the New Mexico Optics Industry Association (nmOptics). She has more than 20 years’ experience developing and launching new products for companies such as CVI Laser, Southampton Photonics, and Polaroid. Abbott has an SB in material science and engineering from Massachusetts Institute of Technology; an executive MBA from University of New Mexico; and an MS in polymer science and engineering from University of Massachusetts, Amherst. She is an active member of the SPIE Corporate and Exhibitor Committee and the SPIE team conducting an ongoing analysis of the photonics business. 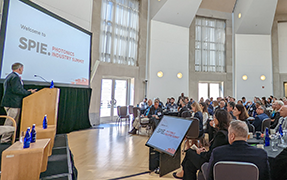