New developments in the field of organic photovoltaics.

The field of organic photovoltaics (OPVs) was launched with the promise of the development of low-fabrication-cost solar cells and modules. Thirty years later, OPVs have still not fulfilled this expectation.

In spite of great advances achieved in research and development throughout the last decades, especially in terms of their reported power-conversion efficiencies (PCEs), there remain fundamental scientific issues and technological challenges that must be addressed before OPVs can be seriously considered and implemented in reliable and long-lasting applications.

The synthesis of highly soluble organic semiconductors was initially considered as an important breakthrough that would definitely change the fabrication of photovoltaics once for all. Nowadays, the promise of printing solar cells using low-cost and high-throughput mass production techniques still stands.

The possibility of printing solar modules at production speeds up to several meters per second using inkjet, slot die, screen, or gravure printing would allow the coating of the same photoactive area in a single day as that of a traditional silicon foundry in a year!

Hence OPV remains to be a technology subject to further study for on and off-grid applications for which energy production is still the leitmotif.

A recent article in the Journal of Photonics for Energy gives a brief review of the recent development of a class of organic solar cells based on a bulk heterojunction consisting of a polymer electron donor/hole transporter and a fullerene electron acceptor/transporter.

The article, “Polymer:fullerene solar cells: materials, processing issues, and cell layouts to reach power conversion efficiency over 10%, a review,” provides a discussion of new materials synthesis and processing and device fabrication and optimization.

In terms of new materials, authors Ikerne Etxebarria, Jon Ajuria, and Roberto Pacios of IK4-IKERLAN (Spain) report on a new class of light-harvesting polymers based on benzodithiophene and dithienopyran-difluorobenzothiadiazole derivatives, which led to OPVs with 9% PCE. Incorporating deterministic aperiodic nanostructures (DANs) for broad angle light manipulation resulted in 10% PCE for an OPV based on benzodithiophene.

They also point out the importance of adopting smart processing strategies for a large variety of polymer families using additives, solvent mixtures, and post-processing treatments. These are crucial for controlling the bulk morphology of the light-harvesting active layer(s) that results in improved device efficiencies.

The open-access article appears in a special section on solution-processable organic solar cells.

In another recent article in the Journal of Photonics for Energy, researchers from Lehigh University (USA) have proposed a new transparent conducting electrode (TCE) design for OPVs that could result in a doubling of power-conversion efficiency, to 24% from the 12% achieved with today’s state-of-the-art OPVs.

Their approach employs a light-trapping strategy using plasmonic nanostructures to enhance photon absorption, i.e. increasing the optical but not the physical thickness of the light-harvesting layers.

Limits on the thickness of these organic active layers have been one of the major challenges to improving the OPVs’ efficiency in converting solar energy into electricity. This is primarily due to the low-charge-carrier mobility and small exciton-diffusion length (~1-10nm) in most organic semiconductors.

Their research article is published in a special section on nanophotonics and plasmonics for solar-energy harvesting and conversion in the current issue.

They report a sheet resistance of less than 10 Ω∕sq, better than that of a typical commercial electrode material such as indium tin oxide. They show that 2D Ag nanogrids can provide polarization-independent light-trapping effects for OPVs, which lead to a large photon absorption enhancement (150%) in the organic light-harvesting layers.

Taking the design one step further, they propose an OPV structure sandwiched between one top and one bottom 1D Ag nanogratings, which are perpendicular to each other. This leads to additional excitation of the surface-plasmon resonances (SPRs) in the central part under both transverse magnetic (TM) and transverse electric (TE) polarizations and a photon-absorption enhancement of 200%.

“These design principles are quite general and can be extended to other organic, inorganic, and organic/inorganic hybrid optoelectronic devices with thin active layers,” the researchers conclude. They add that since SPRs are sensitive to the geometric parameters of metallic nanostructures and the dielectric constants of surrounding materials, however, “careful consideration is required for each specific design and material used.”

Coauthors on the paper are SPIE Fellow Zakya Kafafi, founding editor-in-chief of the journal who chairs the Organic Photonics+Electronics symposium and the OPV conference at SPIE Optics+Photonics, and Filbert Bartoli, chair of the Electrical and Computer Engineering Department at Lehigh. 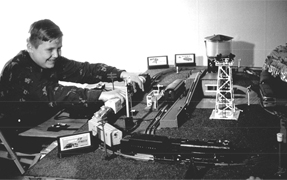 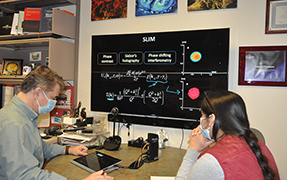