The image receiving the third-place prize in the SPIE International Year of Light Photo Contest shows an athlete on a stand-up paddle board using LED lights to “paint” across a calm bay in the US Pacific Northwest.

The light painting by Ian Bell of Bozeman, MT (USA), is a long-exposure photograph enabled by a variety of photons, light-based technologies, and optical devices that are being celebrated during the International Year of Light and Light-based Technologies in 2015 (IYL2015). 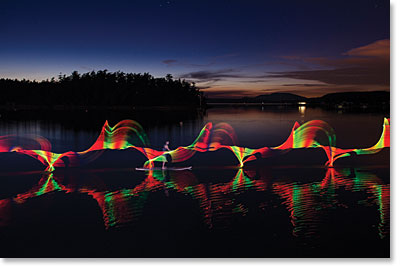 Bell graduated with honors from Montana State University this spring with degrees in photography and business management. He says he plans to continue pushing the boundaries of what is technically and creatively possible with his sports, lifestyle, and landscape photography business.

His prize-winning image is part of a series of light-painted photographs he calls “Lumen.” The photo project was shot in various locations, mostly at night or twilight and shows athletes painting with light while on horseback, skis, bikes, and ice skates as well as the stand-up paddle (SUP) board.

Bell’s paddleboarder, with a LED rig mounted to his paddle, was shot in Fisherman Bay on Lopez Island, WA, after sunset on 3 August 2014.

“The LEDs mixed with a long exposure allow us to study the movements of the athlete over time,” Bell says. “A quicker, more traditional exposure would not have allowed us to see” the athlete or the ribbon of light from the LEDs that are reflected on the still water.

Light painting is a photographic technique in which either a light source or a camera moves while the photo is being taken. The camera records, over several seconds, minutes, or more time, a subject or scene in a single frame.

SPIE member John Dudley, chair of the IYL2015 Steering Committee, has called light painting a “perfect example of how the science of illumination technology can combine with artistic design to create works of beauty and inspiration — and raise awareness of the International Year of Light and its goals.”

IYL2015 is a global initiative adopted by the United Nations to raise awareness of how optical technologies promote sustainable development and provide solutions to worldwide challenges in energy, education, agriculture, communications, and health. SPIE is one of 12 founding partners.

CHOSEN FROM 800+ PHOTOS IN INTERNATIONAL CONTEST

SPIE is providing prizes of US $4,500 in the photo contest, including $500 for Bell’s third-place award and another $500 for the People’s Choice Award, which is being decided in a public vote.

A panel of 40 graduate students in art and science programs screened more than 800 photos submitted to SPIE in 2014, rating each photo on how well it depicted the contest theme of light and light-based technologies in daily life, artistry, scientific interest, and other criteria.

From the top-rated 35 images, an executive panel then selected the top three photos.

Bell and the first- and second-place winners are not eligible for the People’s Choice Award.

Anyone can vote in this phase of the contest by going to spie.org/IYLphoto before 15 August. Voters who provide their email address will be entered in a drawing for a GoPro camera. (Some restrictions apply.)

Read more about the People’s Choice Award in this issue of SPIE Professional.

LEDs, created with optics and photonics technologies, were a popular photographic subject in the contest.

The bright, low-cost, energy-efficient diodes that have brought social, environmental, health, educational, and economic gains to society are shown in all three prize-winning photos and numerous others submitted.

British photographer Paul Reiffer won the first-place prize with a long-exposure photograph of the vehicle, road, and other city lights on and around Shanghai’s Nanpu Bridge on New Year’s Eve 2013. The professional photographer from Weymouth, England, planned his shot so he could capture the “rainbow” display of the three-layered ramp to the bridge that links Puxi to Pudong.

“Every weekend and public holiday, Shanghai’s road network transforms into a multicolor LED light show throughout the city,” Reiffer said.

Bell says he rigged a homemade LED array on the paddle for his contest photo, illustrating the ubiquity of this revolutionary lighting technology. 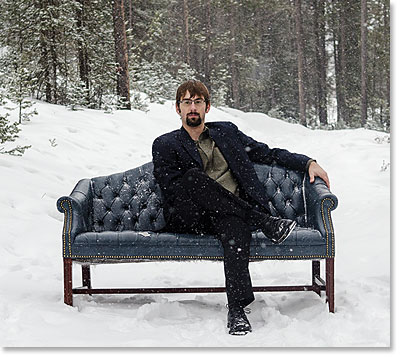 More photos from Bell’s Lumen project can be found at ianbellphotography.com/lumen.

Susanta Mukherjee of India won the second-place prize for his photo of Indian children showing off their new solar-powered LED study lights.

The rechargeable lights were provided by the One Child One Light (OCOL) Foundation and distributed by a non-governmental organization called ARCHI at a school in the electricity-scarce Sundarbans region of West Bengal in March 2014. OCOL makes the portable LED lights available to non-profit organizations for $2-$3 so that children studying at home don’t have to depend on kerosene or oil-based lamps that emit smoke, toxic fumes, and very low light.

IYL2015 CELEBRATED ALL YEAR IN BLOGS

Stay up to date with all the resources, events, and discussions associated with the International Year of Light on the IYL blog.

The IYL blog has a wealth of information on light in nature, culture, education, health, efficient lighting, and quantum mechanics. Several posts so far this year have celebrated the pioneers in optics and photonics such as Ibn Al Haytham, Albert Einstein and Augustine Fresnel, and others are informative reads about lasers in astronomy, nanolithography, light-speed computing, and more.

You can also receive email notifications of weekly events and all the new posts by signing up on the site.

The International Year of Light is supported by SPIE and 100 international partners. The European Physical Society is coordinating the year-long celebration under the auspices of UNESCO.