SPIE Fellow Kazuyoshi Itoh, a prominent researcher and educator in holography, optical signal processing, and nonlinear optical microscopy, is the recipient of the 2015 Dennis Gabor award.

Itoh, a professor at Osaka University (Japan), is recognized for his 30 years of contributions to the development of incoherent holography and nonlinear optical microscopy and for his pioneering work on coherence-based multispectral and 3D imaging, nonlinear optical imaging, and manipulations of biological and inorganic industrial materials.

SPIE presents the Dennis Gabor Award every year to recognize outstanding accomplishments in diffractive wavefront technologies, especially those that further the development of holography and metrology applications. Itoh received his award at SPIE Optical Metrology in Munich in June. 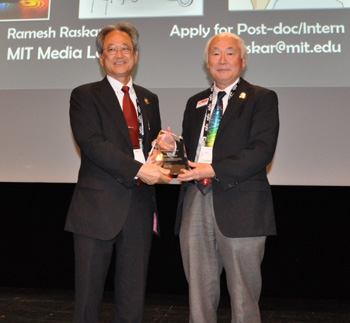 In the early 1980s, Itoh pioneered research on coherence-based multispectral imaging and 3D imaging. He developed a wavefront-folding interferometer that can measure the complex coherence function by averaging out the phase noise caused by the air turbulence.

His technique was the first successful application of incoherent holography for imaging through air turbulence.

Itoh, who has presented numerous invited papers at SPIE conferences, served on the executive committee of the former SPIE Japan Chapter and was the president of the Optical Society of Japan from 2006 to 2008. He is currently a member of the Science Council of Japan.

Nominations for 2016 may be submitted to SPIE through 1 July 2015 for the Britton Chance Biomedical Optics Award and the Biophotonics Technology Innovator Award and by 1 October 2015 for all other SPIE awards.