"I am very passionate about the science of light, and I enjoy the thrill of discovery in scientific research,” says SPIE Fellow Nader Engheta, recipient of the 2015 SPIE Gold Medal.

The N. Nedwill Ramsey professor of electrical and systems engineering at University of Pennsylvania (USA), Engheta is being recognized as one of the founders of modern electromagnetic metamaterials and a pioneer in the fields of optical metatronics and nanoscale plasmonics.

He has been interested in electrical engineering since he was a boy. Growing up in Tehran, Engheta was fascinated by a battery-operated transistor radio and wondered how it was possible to hear music when the radio was not connected to anything. How could the signal travel from the radio station to the radio without an obvious connection?

This curiosity led him to study electrical engineering at University of Tehran where he pursued his interest in the world of waves through topics such as wave propagation, electromagnetic theory, and solid states.

Engheta attended California Institute of Technology (Caltech) for MS and PhD degrees in electrical engineering. At Caltech, his mentor and advisor was Charles H. Papas, a world-renowned scholar in electromagnetic theory, whose influence led Engheta to study optics and electromagnetics.

Today, fueled by his creativity and passion for science, Engheta and his research group delve into diverse topics at the forefront of optics and microwaves, including nanophotonics; metamaterials; bio-inspired imaging, and microwave and optical antennas.

“Engheta’s work has been pushing, and continues to push, the boundaries and frontiers of optical sciences,” says Victor G. Veselago of the Russian Academy of Sciences. Engheta has also “truly advanced the optical engineering aspects and the future of optical technology.” 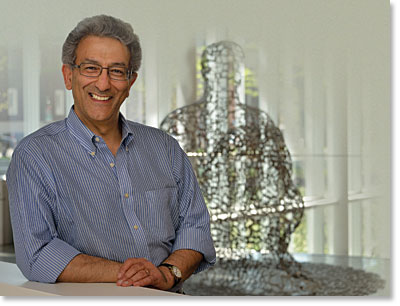 METAMATERIALS: BEYOND THE ORDINARY

Metamaterials are structures that have unusual, beyond-the-ordinary effects on waves. (The Greek prefix “meta” means “beyond.”) Scientists in this discipline combine physics, engineering, and nanotechnology to develop technologies that can bend and manipulate waves in ways that nature cannot.

Metamaterials are composites of natural materials but are designed to manipulate electromagnetic waves in more complex ways. As multiple manipulations are combined or performed in sequence, metamaterial researchers can change the shape of waves in complex ways.

The shape of objects that a wave interacts with can influence the properties of the wave. Engheta and other metamaterials researchers are designing shapes with features that are smaller than a given wavelength. This has led to the development of super lenses with unprecedented magnification abilities and cloaking devices that bend waves around an object, making it invisible.

“Nature has given us a lot of materials,” Engheta says. “The whole periodic table and all of the combinations of its elements are all made out of atoms and molecules. Natural materials have chemical, electromagnetic, and optical properties that are formed by the arrangement of those atoms and molecules.”

In contrast, the properties of metamaterials are formed by man-made structural features. These so-called inclusions are much larger than atoms but smaller than the wavelengths researchers want them to interact with.

“Because they’re man made, we can control the properties of those interactions,” he says.

Engheta has taken metamaterials research to another level by establishing a new discipline that he considers even more transformative and impactful. Developed in 2005, “optical metatronics” is a circuit paradigm made of collections of nanostructures with proper materials, shapes, and sizes that process information at the nanometer scale. These tiny circuits with light could lead to the miniaturization of systems, with possibilities for nanoscale computers and processors.

Engheta points out that a collection of nanostructures properly designed and judiciously arranged next to one another can create optical circuits, in which the nanostructures function as “lumped circuit elements” such as optical nanocapacitors, optical nanoinductors, and optical nanoresistors. These optical-lumped nanocircuit elements create a unifying set of “circuit alphabets” for electrons and photons, linking and merging nanoelectronics and nanophotonics. Scientific ideas and engineering designs can now be transferred between these two fields.

At his university lab in 2010, Engheta and his team built the first physical optical metatronic circuit, which manipulates light waves similar to the way an electrical circuit in a computer or phone manipulates electrons. Optical metatronics may one day be used to create objects that do math when light is shined on them.

“What if we could make a material where we put a function in on one end and get its derivative or integral out on the other? We’re working on that,” Engheta says.

When Engheta came to University of Pennsylvania in 1987, he built his research group around the idea of electromagnetic wave interaction with chiral structures.

“Chiral structures have handedness, like how your right and your left hand are different from one another,” Engheta explained in a 2012 interview with Penn Current. “Helical structures — DNA, for example — have chiral properties. My group and I were interested in how we could learn from these kinds of helical structures in nature and translate it to the microwave frequency. We wanted to see how man-made chiral structures, things like springs, interacted with microwave signals.”

Finding the answers to these questions was the precursor to Engheta’s interest in metamaterials, but it also led to his interest in a completely different field — biologically inspired optical imaging.

Some animals, such as cuttlefish and bees, have polarized vision, which allows them to see aspects of light invisible to humans. Animals with this ability can use it for several behaviors including orientation, navigation, object recognition, and signal detection.

Like the young boy who questioned how sound could come from a “disconnected” radio, Engheta was intrigued by this phenomenon.

“Species with polarized vision can detect the characteristic of image-forming light and extract its information,” Engheta says. “We asked ourselves what we could learn from this interesting ability that has evolved in certain biological visual systems.”

This has led to various applications such as improved detection, enhanced visibility in low-contrast conditions, longer detection range in scattering media, polarization-sensitive adaptation based on changing environments, surface deformation-variation detection, and “seeing” objects in shadows.

An active SPIE member since 2007 and an SPIE Fellow since 2011, Engheta has been a cochair of a metamaterials conference at SPIE Optics+Photonics for several years. This year the conference is expanding from fundamental and applications research to include metadevices and metasystems.

“SPIE is a fantastic organization, promoting scientific and technological interaction among scientists and engineers both from academics and industry, working in all aspects of optics,” says Engheta, who “feels fortunate” to be a part of the Society.

Engheta is also an inspiring educator who tells his students, “Let yourself be driven by curiosity and follow your passion for discovery.”

Engheta is also scheduled to give a plenary talk on sculpting waves at SPIE Optics + Photonics Sunday, 9 August.

NOMINATE A COLLEAGUE FOR SPIE AWARDS