Biometric and surveillance technology, thermal imaging for oil and gas exploration and monitoring, robotics, and numerous photonic sensors will provide crucial research and engineering capabilities needed for the defense, security, and sensing community.

These were some of the takeaways at SPIE DSS in April, the largest annual optics and photonics conference and exhibition on the US East Coast. More than 5100 people participated in 55 conferences, the 382-company exhibition, multiple industry programs, and 30-plus professional development courses in Baltimore, MD (USA).

A commercial and scientific sensing emphasis launched at the event in 2014 gained momentum in 2015 with 23 conferences, increased industry involvement, and expanded topic areas such as smartphone spectroscopy, high-resolution night-vision and thermal-imaging systems, food safety, and healthcare.

“A lot of technology exists within the military and defense environment that is capable of being rolled out into the commercial world,” said David Bannon, CEO of Headwall Photonics, an SPIE corporate member and frequent exhibitor.

New this year, FLIR Systems displayed its innovative culture with the help of documentary maker Louis Psihoyos and nature-show host Casey Anderson — not in a booth at the exhibition floor, but on its Center Stage.

Psihoyos described how he used FLIR cameras in his Academy-Award-winning documentary “The Cove.”

FLIR’s technology enabled underwater, surveillance, and other capabilities in that film and in his soon-to-be-released documentary “Racing Extinction,” a film aiming to expose the hidden world of endangered species and the race to protect them against mass extinction. Psihoyos used filters developed by FLIR that make gases such as methane and CO2 visible in the latter film.

Anderson, a television host and producer of National Geographic’s “America the Wild” and “Expedition Wild” discussed his documentary, “Wild Nights, The Dark Planet Revealed.” He demonstrated how FLIR thermal cameras have enabled him to see previously unseen frontier and wildlife in the night. “FLIR technology has opened up a new world for me,” Anderson said.

NATURE OF CONFLICT HAS CHANGED

In his plenary talk, C. David Brown, the US Deputy Assistant Secretary of Defense for developmental test and evaluation and a retired US Army Reserve colonel, noted that the nature of conflict has changed in significant ways. Instead of on a battlefield, for instance, conflicts of the future will occur in the commons — areas that have no domain owners — and will involve state actors as well as non-state actors, Brown said. 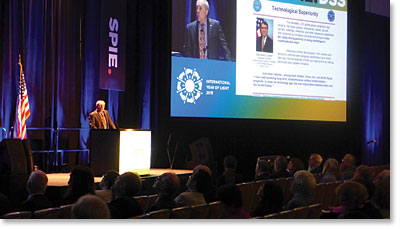 Technology advancements, known as “offsets” in the military, will continue to be important, Brown said, but they will be different from the asymmetric capabilities the US built in the late 1950s or the “own-the-night” emphasis of the 1980s.

Challenges in this era of “the rise of the commons” include modern electronic warfare, ballistic- and cruise-missile defense, precision navigation and timing, communications, intelligence surveillance and reconnaissance, integrated air defense, cyber threats, and weapons of mass destruction, Brown said.

At the same time, the US Department of Defense is concerned that a return to budget sequestration would cause delays or cancellation of capabilities under development, Brown said. He listed programs such as the Aerospace Innovation Initiative, next-generation adaptive engine, ground-based interceptor missile-defense system, and space control efforts.

To help mitigate threats, develop affordable new and extended capabilities in existing systems, and create “technology surprise” through science and engineering, the US will work toward a smaller, leaner, technologically advanced military, said Brown, who has a PhD in electrical engineering and teaches graduate courses at Johns Hopkins University. The aim, he said, will be to confront and defeat aggression by protecting and prioritizing existing investments, rebalancing the nation’s global posture, building partnerships, and strengthening alliances.

In a separate talk, William Chappell, deputy director of the Microsystems Technology Office at the US Defense Advanced Research Projects Agency (DARPA), discussed the next generation of microsystem technology. He said it will involve heterogeneous integration of blended electronic and optical designs to facilitate requirements including personalization, rapid design and portability, and security.

“Light will become the next frequency,” he said, with important enabling technologies including lasers, detectors, nonlinear optics, and silicon chips.

Underscoring the overlap in opportunities for both military and commercial markets, one of the biggest conferences at SPIE DSS covers fiber-optic sensors and applications. It is the largest annual gathering of scientists and engineers in the field of optical sensing for commercial, scientific, industrial, and environmental applications.

At one session, Peter Kiesel of PARC, a Xerox company, reported on new fiber-optic sensing technology that can be embedded within next-generation batteries and other objects to understand a variety of parameters including temperature, pressure, and chemical composition.

Researchers at PARC invented this high-resolution, wavelength shift detection (WSD) and interrogator technology and are in the process of identifying market-facing partners interested in licensing and further commercializing the technology.

SPIE corporate member Open Photonics is partnering with PARC on the next phase of commercialization of the technology, which can be used for structural-health monitoring and to monitor the internal condition of batteries, wind turbines, generators, or engines.

These sensors have been developed with support from the Advanced Research Projects Agency-Energy (ARPA-E) and are being eyed by the growing market for battery management because they can, for example, better predict miles-to-empty in an electric vehicle, give better state-of-charge estimates, or reveal internal damage.

Tiny optical wavelength shifts, at the picometer and even femtometer scale, provide immediate feedback via smart embedded sensors. These optical sensors provide better information about what is going on inside a battery than can be inferred by external measurement of voltage, current, and temperature.

Industry programs at SPIE DSS included a panel discussion on the potential of industry and government collaboration, an update from the SPIE team on its analysis of the size of the photonics market, and an overview of US programs with the potential of changing several technology landscapes.

The SPIE team found that the photonics-enabled global market in defense and security logged $216 billion in sales last year.

The three largest segments, which account for the lion’s share of the market, are the aerospace and defense industry, anti-counterfeiting, and video surveillance, Anderson said.

The industry program also included discussion on proposed changes to US export regulations controlling and limiting non-US sales of key photonics technologies such as lasers and sensors.

Among the awards given at SPIE DSS for exceptional papers was the inaugural “Fumio Okano Best Paper Award” in the 3D Imaging, Visualization, and Display conference.