Beyond the Solar Decathlon

Since 2002, the Solar Decathlon has involved 112 teams and influenced nearly 17,000 collegiate participants. Ryan Abendroth (pictured at right), founder of Passive Energy Designs (USA) — a company that consults on high-performing, low-energy buildings – credits his career to his participation in the Solar Decathlon 2009, an event he calls “transformative.”

Abendroth became involved with the Solar Decathlon while studying architecture at the University of Illinois Urbana-Champaign (USA). For the Illinois Solar Decathlon team, he performed energy modeling on Gable Home, which combined energy-efficiency practices and traditional building techniques and produced up to four times the energy it needed. The Illinois team won second place overall in the competition. 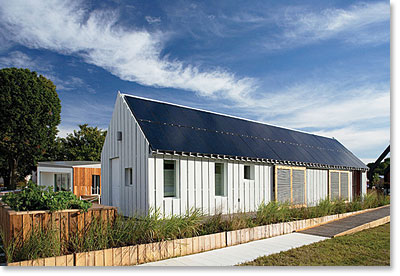 “The experience did not just benefit my work, but it laid the foundation for all my work to come,” said Abendroth in an interview on the Solar Decathlon blog. Today, Abendroth uses his expertise to consult on energy-efficient buildings. To date, Abendroth has worked on more than 100 buildings to help others design and achieve ultra-efficient houses that are aesthetically pleasing and functionally livable.

“The camaraderie among the students both times I competed was excellent. We built lasting friendships and professional networks,” said Abendroth. “It’s not just about a competition but rather an investment into all of the decathletes, their futures, and the future of the building environment.”

Read more about the Solar Decathlon.

SPIE Professional launched its “Photonics for a Better World” series in the SPIE member magazine five years ago.

Read more articles and blog posts celebrating the many ways that optics and photonics are applied in creating a better world at PhotonicsForaBetterWorld.org