Well known as a bike-friendly nation, The Netherlands boasts around 18 million bicycles and 35,000 kilometers of bike lanes. Two new projects unveiled in November 2014 seek to make greater use of the green infrastructure by paving bike paths with solar panels.

Power generated by solar panels on one of the innovative projects, “SolaRoad,” will eventually be funneled into the national energy grid.

The SolaRoad is the brainchild of the Netherlands Organization for Applied Scientific Research (TNO) and officially opened in the town of Krommenie. 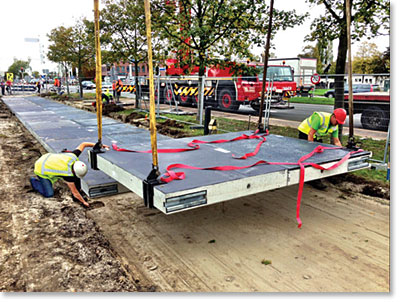 “With SolaRoad, we are making double use of infrastructure,” says TNO project manager Wim van der Poel on the SolaRoad website. “Next to a mobility function, roads will now get a (sustainable) energy function as well. SolaRoad will be a starting point.”

The road is made up of rows of crystalline silicon solar cells embedded in concrete and covered with a translucent layer of tempered glass. It has a non-adhesive finish and was built at a slight tilt in order to keep it clean and give the road maximum exposure to sunlight.

Because the panels lie almost flat, they produce about 30 percent less power than similar panels would produce on an angled rooftop. The idea is that surface area of The Netherlands’ total road network (around 140,000 km) is much larger than that of the rooftops that could hold solar panels, so could eventually produce more power.

History and the future meet on another solar-powered bike path in The Netherlands, built to honor the town of Eindhoven's most famous resident, Vincent Van Gogh. The Van Gogh-Roosegaarde Bicycle Path from Studio Roosegaarde and Heijmans Infrastructure was inspired by Van Gogh’s famous painting “Starry Night.”

The one-kilometer-long path uses solar LED lights to provide cyclists with a glowing green path at night. The new path is part of celebrations marking the 125th anniversary of the death of Van Gogh (1853 -1890), who lived in Eindhoven for a few years and used the town as a backdrop in several paintings. 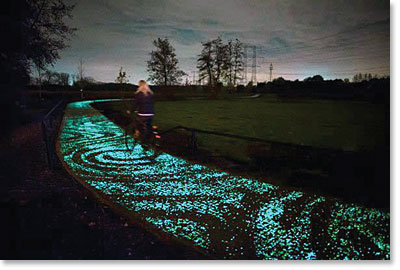 This glowing bike path is based on Vincent van Gogh’s Starry Night.
Courtesy of Studio Roosegaarde

The glowing bits in the path are not actual stones. Using a smart coating material, the path’s designer, Daan Roosegaarde, was able to create 50,000 fluorescent “rocks” that were embedded into wet concrete. The coated pebbles charge throughout the daytime and light the trail at night for up to eight hours. A solar panel is also used to charge the trail on cloudy days.

The solar bike path is a part of the Smart Highway project — a collaboration between Studio Roosegaarde and Heijmans. The goal of this project is to make roads and highways more sustainable with smart coating that will light the roads at night.

According to Roosegaarde, the Van Gogh-Roosegaarde Bicycle Path is “all about connecting worlds of poetry and pragmatism.” He is inspired by the cultural history of Van Gogh, but also wants to connect the path to the future by creating “energy-neutral and poetic landscapes.”

Riding or walking along the glowing path is “like moving through a fairy tale,” says Roosegaarde, who also notes that the concept will appeal to different people for different reasons.

SPIE Professional launched its “Photonics for a Better World” series in the SPIE member magazine in 2009.

Read more articles and blog posts celebrating the many ways that optics and photonics are applied in creating a better world at PhotonicsForaBetterWorld.org