Nanyang Technological University (NTU) in Singapore launched the Photonics Institute in October 2014, calling it “one of the most advanced institutes in the field today.”

NTU partnered with the University of Southampton (UK) to set up the new institute. Southampton is home to the Optoelectronics Research Centre, renowned as a center of excellence in optical fiber development. 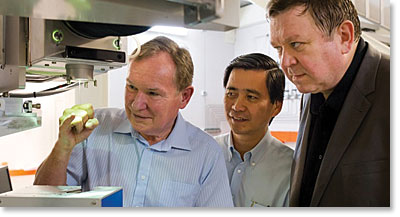 The $80 million Photonics Institute at NTU will employ 120 scientists across five research centers. These five centers are:

As part of the celebration of the opening of the new facility, NTU hosted a special lecture series entitled “Century of Light” on 30 October 2014. As part of this series, SPIE CEO Eugene Arthurs discussed the International Year of Light (IYL) in 2015, noting that IYL is “a unique opportunity to showcase the importance of light through history and for the future of humanity.”

SPIE Member Sir David Payne of the University of Southampton discussed optical fibers in his talk “From glass to Google.” In “There’s plenty of light at the bottom,” SPIE Member Nikolay Zheludev of the Optoelectronics Research Centre explained how nanophotonics is the nanotechnology of light.

Payne and Zheludev are co-directors of the new Photonics Institute along with Tjin Swee Chuan of NTU.