Paul Reiffer’s 35-second-exposure image of traffic and other lights on and around the Nanpu Bridge in Shanghai is the winner of the SPIE International Year of Light Photo Contest. The depiction of the multicolor LED light show was selected from among nearly 800 images submitted to SPIE for the contest in 2014.

“The creativity in selecting the perspective, with the natural motion through the curves and onto the bridge is very appealing,” he said. 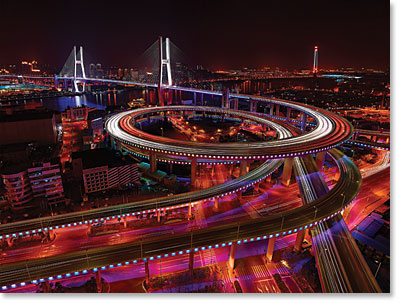 The SPIE IYL Photo Contest was held to raise awareness about the International Year of Light 2015 celebration and the vital role that light and light-based technologies play in daily life, promoting sustainable development and providing solutions to global challenges in energy, education, agriculture, and health.

“I have been impressed by the quality, variety, and large number of submissions,” said SPIE CEO Eugene Arthurs. “I congratulate the winners on behalf of the optics and photonics community and send our thanks to the distinguished judges for their dedication in the difficult task of picking winners from so many winners!”

Along with Niemela, judges for the contest included award-winning American photographer Mathieu Young; Deborah Klochko, director of the Museum of Photographic Arts in California; Jana Huisman, the Photonics21 Young Ambassador for Photonics Education; and nearly 40 graduate students from university art programs and SPIE Student Chapters. More information on the photo contest judges can be found at spie.org/IYLphoto.

SPIE is one of 12 founding partners of the IYL and is providing prizes of US $2,500 for the first-place photo; $1,000 for second place; and $500 each for third place and People’s Choice. SPIE Professional will feature the winning photos on the covers of each quarterly issue of the magazine in 2015.

Reiffer, a professional photographer from Weymouth, England, took the photo with a Phase One 645DF camera on 31 December 2013, and titled it “Over the Rainbow.” Reiffer relocated to Shanghai for a few years to be closer to photographic opportunities in Asia.

On certain holiday weekends in Shanghai, not only do the traffic trails create amazing shapes with headlights across the three-layer ramp, but a rainbow show of different-colored LEDs makes the entire scene come to life. This was not Reiffer’s first trip to the top of a nearby building to capture an image of the bridge, but it was the first time everything clicked for him.

“Being outside on a rooftop watching the city get home after a long day’s work with the moving light show going on below you is fantastic,” he said. “A photograph can never quite catch the real motion that sits in front of you when you see it live with your own eyes, but as so many cars passed ‘over the rainbow’ that night, my only hope is that I captured enough of it to create a truly lasting image.”

The second-place winner and recipient of a $1,000 prize is Susanta Mukherjee, an amateur photographer from West Bengal, India, who traveled to a village without electricity in March 2014 and captured the appreciation of children who received free solar-powered study lights. 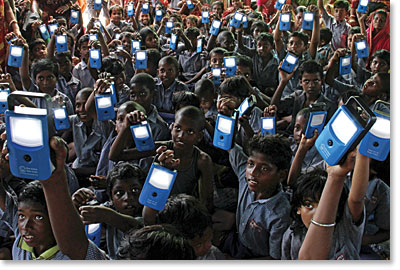 Ian Bell, a student studying photography and business at Montana State University in the United States, won the third-place prize and $500. Bell used a long photographic exposure last summer to create a “light painting” of an athlete on a stand-up paddle board. His photo (below) paints an island coastline with LEDs mounted on the paddle. 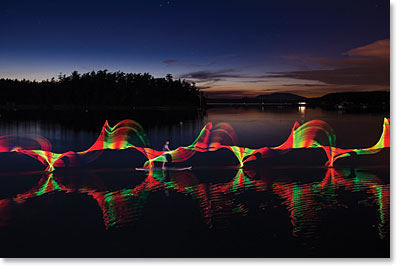 In addition to choosing the top three photographs, the judges selected 32 images as finalists for the contest’s People’s Choice Award. Members of the general public and the optics and photonics community will vote on their favorite photo from among these finalists later this year. Details about voting on and viewing the images in the People’s Choice competition will be announced this spring.

Thirty-two images were selected as finalists for the SPIE IYL Photo Contest’s People’s Choice Award. Voting will take place later this year. Three of the 32 are SPIE members.