01 January 2015
The International Year of Light is finally here.

Originally conceived and proposed more than four years ago, the 2015 International Year of Light (IYL 2015) endured a meticulous process of building support and navigating the path to United Nations approval. At the helm from the beginning was John Dudley, who chairs the IYL2015 Steering Committee.

Finally, in December of 2013, the journey was complete. The United Nations General Assembly approved the IYL designation for 2015. Thus began an exciting year of preparations for the celebration.

The possible ways to celebrate something as ubiquitous as light are almost unlimited, and so are the activities organized all around the world, as evidenced by the extensive calendar of events on the official website, www.light2015.org. From the gala kickoff event in Paris (19-20 January) to local events organized by student groups, this promises to be a year of excitement, learning, and just plain fun.

The impact of light will be apparent to attendees arriving for the opening ceremony before they even get near the UNESCO headquarters, the Fontenoy Building. It will be decked out in a light installation created by Finland-based artist Kari Kola. Entitled “Light is Here” it will consist of beams from each corner of the building forming a “light pyramid” in the sky that should be visible from 15 kilometers away. All sides of the building will be awash in the colors of the aurora borealis, which will be constantly changing.

The opening ceremony will begin with a video message from United Nations Secretary-General Ban Ki-Moon. Throughout the two-day event, distinguished speakers will discuss various aspects of light, individually and in panel discussions. Each session will launch with a plenary lecture by a Nobel Laureate whose work has involved some aspect of light. These include Zhores Alferov, Serge Haroche, William Phillips, Steven Chu and Ahmed Zewail. Charles Townes will also provide a video welcome. An audience of more than 1200 invited guests is expected.

Coming to a spot near you

Smaller, not so glitzy, but perhaps even more important are the efforts that will be organized locally around the world, from “The Story of Light” festival in Goa, India, highlighting collaborations between artists and scientists, to the Ann Arbor (Michigan, USA) Light Project, a diverse group organizing a series of outreach events for the community. In the dark winter of the northern hemisphere, light festivals will take place in Bath (UK), Helsinki (Finland), Taichung (Taiwan), and Havana (Cuba), to name a few. See the calendar (right) for more.

SPIE has supported several efforts with special International Year of Light Activity Grants to SPIE Student Chapters around the world to help develop community IYL events. The first of two groups of grants will help fund events in the first quarter of this year. A second round will cover the rest of 2015. Among the global recipients of grant funding for Quarter 1:

Many other innovative efforts are in the works. SPIE will contribute $20,000 in grants for the first quarter, and $40,000 for the rest of 2015 to the student chapters’ efforts. For a complete list of IYL2015 grant winners, see spie.org/IYL. In addition, the website provides links to several tools that can help local educators and organizers create events and get the word out about the International Year of Light. 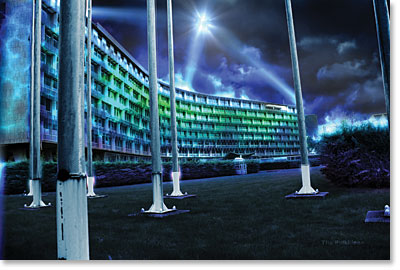 “Light is Here” was designed by Finnish light artist Kari Kola for the IYL opening ceremony in Paris. On display at the Fontenoy Building – headquarters of UNESCO – this 360-degree display features beams of light that form a “light pyramid.” The display reflects two powerful elements of natural light – the aurora australis and aurora borealis.

Kari Kola has been creating light art for festive events and art projects through his company Valoparta since 2005.

“Light is my greatest passion and large outdoor installations are my main expertise,” he says. “It’s an honor to take my vision to the center of Paris and participate in raising awareness of the importance of light to humankind. Light is here, light is everywhere.”

”Light Is Here” will also celebrate Kola’s 10 years as a light artist. The installation is supported by the Institute of Photonics of the University of Eastern Finland.

Kola has designed lighting for musicals, operas, theater, and concerts in addition to creating light designs for dance performances. Architectural landscapes, multi-channel soundscapes and light installations up to a hectare in size are among his creations, even in extreme conditions such as –25°C.

He regularly participates in the Nordic Light festival in his hometown of Joensuu, Finland, and has created works for many other events across northern Europe. Last September, he designed lighting for “4 Elements” an immersive show on and around the Citadel of Cascais, Portugal, part of the LUMINA Light Festival in that city.

SPIE member and chairman of the IYL2015 steering committee John Dudley received the 2014 SPIE President’s Award for his efforts in advancing IYL2015. Dudley is the president of the European Physical Society and a professor at Université de Franche-Comté (France) where he heads the optoelectronics and photonics research section of the CNRS research institute FEMTO-ST.

Dudley says, “It was immensely satisfying to see how open-minded and interested [United Nations diplomats] were in learning about the optical technologies that underpin modern society and which promise so much in areas of global development and improved quality of life.”