The Abdus Salam International Centre for Theoretical Physics (ICTP), considered a core institution for physics and mathematics in the developing world, celebrated its 50th anniversary with a four-day celebration, 6-9 October 2014 in Trieste, Italy, where the institution began.

Founded in 1964 by the late Nobel Laureate Abdus Salam, ICTP provides scientists from developing countries with continuing education and skills to conduct research and to study the latest advances in physics and mathematics and enjoy long and productive careers. ICTP has been a major force in stemming the scientific brain drain from the developing world.

Now ready to begin a second half-century, the center is expanding into new areas such as telecommunications and renewable energy.

“It’s good to have the basic sciences that we’ve supported all this time: high energy physics, cosmology, condensed matter, and pure mathematics,” said ICTP director Fernando Quevedo. “But the vision of Salam was also for more applied subjects – climate change, telecommunications, and so on.”

Another part of this expansion, Quevedo added, is that ICTP is starting new partner institutions outside Trieste that can run ICTP-type programs in their own regions. 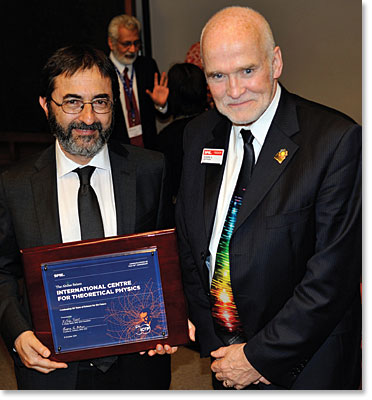 The next 50 years of global optics research

Opening-day speaker Irina Bokova, Director-General of UNESCO, highlighted the importance of ICTP as a hub for scientific collaboration. She pointed out that ICTP is the first global science research organization ever created and, “it has demonstrated that it is a successful model to respond to the needs of scientists in the developing world and to build scientific capacity.” 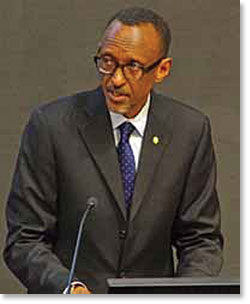 Rwandan President Paul Kagame (right) told the audience that ICTP enables scientists from Africa to return home and contribute. “Connecting our young people to the scientific mindset can help them be better citizens,” he said.

In a roundtable discussion on the next 50 years of optics, SPIE CEO Eugene Arthurs noted a “worrying lack of translation of scientific advances into useful outcomes.” Basic science is a key element of the innovation infrastructure, but by itself is not sufficient.

Arthurs also said there is a growing scientific illiteracy among the nontechnical public and politicians in many nations. However, the International Year of Light and Light-based Technologies (IYL 2015) established by the United Nations is a once-in-a-lifetime opportunity for the photonics community to work toward increasing scientific awareness and knowledge.

“ICTP’s founding fathers, particularly Abdus Salam and his visionary partner, the Italian physicist Paolo Budinich, had a dream to create an institution that could bring scientific excellence to all corners of the world,” said Quevedo to a crowd of nearly 300 attendees.

“Today is a very special day for the ICTP community since we are celebrating 50 years of a unique institution that over the years has become more and more relevant to the needs of our planet and its inhabitants, for science is a key component of our culture, our development, and is one of the most effective means of our survival.”

The ICTP Winter College on Optics will be held 9-20 February 2015 and will cover all aspects of optical-based space observing systems. The theme for 2015 is Light: A Bridge Between Earth and Space.

Lectures are divided into three areas: optics and photonics components; instruments and technologies; and space applications.

The LAMP (Laser, Atomic and Molecular Physics) program is intended for presentations by the participants. All participants are encouraged to present their own research, either in poster form or as a short oral presentation, and the program will be finalized prior to the start of the College. Prizes, sponsored by SPIE, will be awarded.

Organized every year by the ICTP in Trieste, Italy, and co-sponsored by SPIE and other organizations, the Winter College is open to scientists and students from all countries that are members of the United Nations, UNESCO, or the International Atomic Energy Agency.