Knowledge and science flourished during the 8th through 13th centuries in the Arab-Islamic world.

The knowledge and science that flourished during the 8th through 13th centuries influenced the Arab-Islamic world and spread throughout Europe.

To celebrate this “golden age” of Islamic sciences, the Optical Society of Tunisia hosted the workshop, Shedding Light on the Contributions of Muslim Scholars to Science and Technology, at the Tunisian Academy of Sciences in December 2014. The workshop was supported by SPIE and UNESCO.

The workshop aimed to inspire young researchers and students through lectures demonstrating the significant aspects and innovations from the Golden Age of Islamic Sciences. 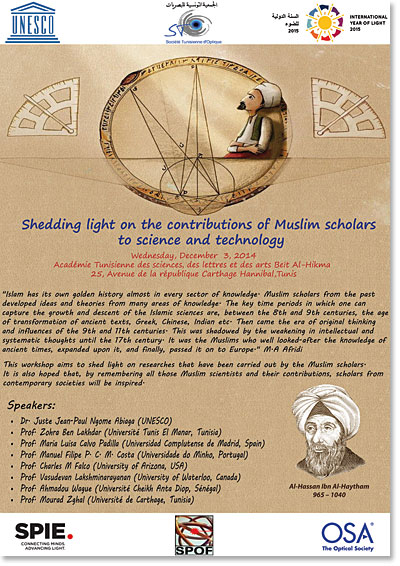 Scientists from around the world reflected on the important contributions of the golden age’s Muslim scientists.

The workshop also honored the legacy of Ibn al-Haytham, considered the father of the modern scientific method. He proved that light travels only in straight lines, and argued that light rays can bend when moving through different elements.

Ibn al-Haytham’s most famous work is his seven-volume treatise, The Book of Optics. This composition was written from 1011 to 1021 while Ibn al-Haytham was supposedly under house arrest due to a failed project to dam the Nile.

The Optical Society of Tunisia will hold the workshop, Lighting up Africa with Lasers, Optics, and Fibers in Carthage, 15-21 March 2015.