The award recognizes Dammel’s contributions to the development of photoresist, anti-reflective coatings, and directed-self-assembly materials for semiconductor lithography. 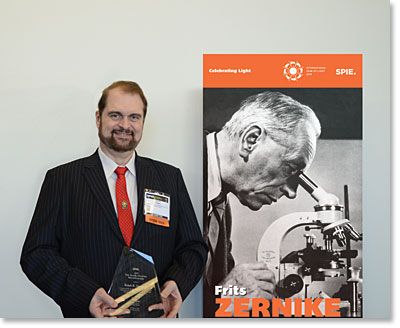 Dammel with his award and a panel showing the late Nobel Laureate Frits Zernike. The panel is one of several produced by SPIE to celebrate the International Year of Light.

Dammel had been with AZ Electronic Materials and its predecessors since 1986 in various technology functions, including global R&D director and chief technology officer.

“I am surprised and honored to receive the prestigious Frits Zernike award from SPIE, and I am humbled to stand among all the great lithographers who have previously received it,” Dammel said. “They have shaped the semiconductor industry through their outstanding contributions. My thanks go out to all colleagues and collaborators, who also share in the recognition given to me.”

Dammel has contributed to the design of photoresists and materials for almost every wavelength and radiation source and has published over 200 scientific papers in x-ray, e-beam, 157 nm, 193 nm, DUV, i- and g-line resists. He is inventor or co-inventor for over 90 patents in the field and holds a PhD in chemistry from Goethe University Frankfurt.

Dammel's 1993 SPIE Press Tutorial Text, Diazonaphthoquinone-based Resists, is used as the definitive textbook on this topic. Dammel is an associate editor for the SPIE Journal of Micro/Nanolithography, MEMS, and MOEMS and is a frequent instructor for SPIE courses.