'Joy of Light' in Prize-Winning Photo 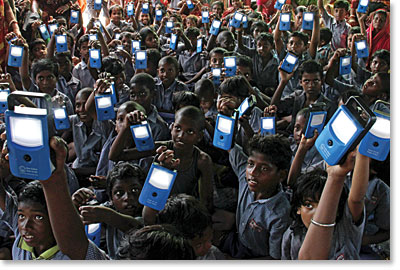 The themes of light-based technologies for sustainable development, energy, and education are exquisitely illustrated in Susanta Mukherjee’s prize-winning photo for the SPIE International Year of Light (IYL) Photo Contest. The second-place photo above shows the delight of children in India’s Sundarbans region of West Bengal who received free solar-powered study lights in March 2014.

“For over 1.5 billion people around the world, night time means either darkness or poor lighting,” says Mukherjee, who titled his photo, “Joy of Light.”

The UN proclaimed 2015 the International Year of Light and Light-based Technologies to raise global awareness about how light and light-based technologies support sustainable development and provide solutions to global challenges in energy, education, health, industry, agriculture, communications, and our environment.

An important aim of the IYL has been to promote the use of portable, solar-powered lanterns in regions where there is little or no reliable source of light at night. The IYL “Study after Sunset” program is meant specifically to improve education in these regions.

Mukherjee says he was traveling in the electricity-scarce Sundarbans region last year when a non-governmental organization (NGO) called ARCHI invited him to photograph the children with the study lights that were provided by the One Child One Light (OCOL) Foundation.

“India has 220 million children in studies, and nearly 98 million children do not have grid lights to study at home in the evening,” says OCOL founder and chief trustee Ranganayakulu Bodavala. Instead, the children and their families depend on kerosene- or oil-based lamps that emit very low light as well as smoke, soot, and toxic fumes.

Pralayesh Kumar Lahiri, founder and secretary at ARCHI, says 5000 children in the region have benefitted from OCOL’s blue, rectangular-shaped lights.

“With these lights, they can study for eight hours at a stretch at night,” Lahiri says. “Any child can charge it easily in the sunlight.”

JOY OF PHOTOGRAPHY, TOO

Mukherjee’s gratitude at winning a prize in the photo contest has been as enthusiastic as the children in his image. 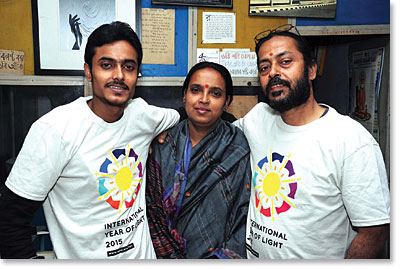 Susanta Mukherjee (right), with his wife and son.

An electric welder from Bengal who has dreamed for years of becoming a professional photographer, Mukherjee says the second-place prize has encouraged and strengthened his 27-year passion for photography.

Mukherjee has expressed his gratitude to SPIE in numerous emails, often including other photos he has taken such as the family photo (above) with his son and him wearing IYL T-shirts.

SPIE is providing prizes of US $2,500 for the first-place photo; $1,000 for second place; and $500 each for third place and the People’s Choice Award. SPIE Professional is featuring the winning photos on the covers of each quarterly issue of the magazine in 2015.

Contest judges selected 35 images, out of more than 800 submitted in 2014, as finalists for prizes. A panel of 40 graduate students in art and science programs did the initial screening, rating each photo on artistry, how well it depicted the contest theme of light and light-based technologies in daily life, and other criteria.

The executive panel that selected the top three photos included SPIE member Joe Niemela of the International Centre for Theoretical Physics (ICTP) in Italy, which is serving as the global secretariat for IYL2015; award-winning American photographer Mathieu Young; and Deborah Klochko, director of the Museum of Photographic Arts in California.

Members of the general public will select one of the 32 eligible images for the People’s Choice Award. Voting for this award will be conducted online, beginning 15 April.