An ongoing SPIE analysis of the photonics business has quantified the worldwide biophotonics-enabled industry sector at $91 billion in annual revenues. The 269 global companies that sell medical imaging equipment, surgical lasers, medical-spectroscopy equipment, optical-coherence-tomography (OCT) systems, and other photonics-enabled products for the healthcare/life sciences sector are responsible for 281,000 jobs, according to the SPIE study.

The biophotonics-enabled marketplace study was based on 2012 data and is an extension of an analysis of the core photonics components industry made public in 2013.

In the earlier analysis, SPIE found that the core consists mostly of small- and medium-sized enterprises and has grown into a healthy global segment worth $156 billion annually. There are 2750 suppliers located in 46 countries who make and sell core photonics components and materials such as LEDs, image sensors, and other optical components. These companies employ some 700,000 people.

Photonics-enabled markets and services such as healthcare/life sciences, lighting, consumer products, communications systems, cloud storage services, and the Internet were not included in the earlier profile of the core component industry, but an SPIE team continues to analyze those market segments, which typically are dominated by larger companies selling higher-priced systems to end users. Biophotonics is the first of these enabled market assessments and others will follow.

Before we drill down further into this industry profile, some context is in order. In the 2012 US National Research Council (NRC) report, “Optics and Photonics: Essential Technologies for Our Nation,” the state of data collection and analysis of photonics R&D spending, photonics employment, and sales in the US was described as deplorable.

The committee of eminent scientists that produced the report noted the lack of data significantly complicates analysis of photonics technology economic impact and opportunity.

One result of that study is the National Photonics Initiative (NPI), a collaborative alliance of key photonics players to raise awareness of photonics and drive US funding and investment in key photonics-driven fields. SPIE is a founding sponsor of the NPI and has assembled a team to quantify the economic impact of photonics.

DATA COLLECTION OF PHOTONICS A CHALLENGE

It has been a challenge. In one example of the data collection problem at the government level, the North American Industry Classification System (NAICS) does not include a specific code for photonics companies. Instead, the optics and photonics components industry currently uses more than 250 different NAICS codes to describe itself, thereby rendering ineffective the coding system for tracking the photonics business.

The NRC Report findings came as no surprise to those familiar with the photonics business landscape. For years, SPIE and others have tried to quench the thirst of regional business clusters, the investment community, and government entities for information about the photonics industry. “How fast is it growing?” or “How many jobs does it create?” are examples of questions from policy makers that have been left unanswered or vaguely addressed only by rough estimates.

The NRC report served as a catalyst to launch a nascent SPIE project. We believed that by combining the SPIE database on the photonics industry – the largest in the world – with data from Dun & Bradstreet (D&B), a commercial provider of company information, we could build a useful profile of the photonics industry using actual company data that would serve to fill some of the information gaps identified by the NRC report.

We embarked on a multiyear mission to develop a methodology that would enable us to create a continuing and updateable profile of the photonics business.

We unveiled the first results of this effort at SPIE Photonics West 2014, with a detailed look at the core component suppliers who exhibited at Photonics West in 2012. This “pilot program” started late in 2012 so was based on that year’s data.

We counted companies that make and ship photonic components but focused only on a known and manageable data set (Photonics West exhibitors). We were able to show that the 1008 component manufacturing companies exhibiting at Photonics West generated global sales of $84 billion and employed 335,000 individuals in 2012.

The lessons learned from this original pilot program have enabled us to move forward with an expanded data set using similar but refined methodology with 2012 data. Our process involves five steps:

The underlying process within these steps also needed to be robust and reproducible because we intend that our industry profile can be updated into the future.

Our first challenge in broadening the analysis was identifying entities active in photonics. We reviewed exhibitors at all relevant events in 2012, not only those organized or sponsored by SPIE. This netted an initial list of 4962 entities.

After excluding distributors, media, educational establishments, societies, and associations, (step 2 above), the net result was 2750 companies that made or shipped photonics components and exhibited at a major photonics event in 2012.

The US and Germany accounted for about half of the 2750 companies. Sales and employment numbers for each company and the proration process described in steps 4 and 5 above enabled us to build the final industry profile.

The SPIE photonics industry study is unique in that it provides a bottom-up analysis of the photonics components business based on real sales and employment data. Of course, there are the inevitable glitches in the data set such as a paucity of information about China and occasional lapses in the D&B numbers. Nonetheless, the study offers a unique lens through which to view and understand the industry landscape, and there are a few surprises. 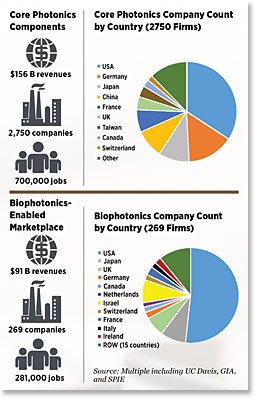 Many suppliers of optics and photonics components are small- and medium-sized enterprises, whereas most companies in biophotonics, as in healthcare generally, are dominated by a small number of large companies selling high-priced systems.
THE FACTS ABOUT THE PHOTONICS MARKETPLACE

It may be obvious to those in the business that the photonics components industry consists of mostly small- and medium-sized enterprises (SMEs), and smaller companies do account for more than 75% of those businesses involved in core photonics-components and materials. It may be less apparent, however, that in terms of revenues, more than 70% of global sales in the core component market originate from only 70 of the 2748 companies (2.5%).

In the latest profile of just the biophotonics-enabled market, SMEs account for only about 35% of the 269 firms. Larger companies selling high-value-added photonics-based systems are more dominant, and the US leads other countries in both number of companies making or selling biophotonics-enabled products (52%) and the share of the $91 billion in revenues (48%).

This project is only a beginning. Now that we have a process, we are adding data for years since 2012 and will be able to highlight more recent photonics revenue and employment trends.

And in a parallel effort by the same team, SPIE will map the core component manufacturing information into a more detailed study of photonics-enabled markets worldwide, including the semiconductor, defense, solar, measurement, and other segments.

SPIE will present the results of the newer studies at events throughout the year.

In a separate analysis of photonics industry production across Europe, an Optech Consulting report says total photonics production in Europe reached a value of €60 billion in 2014. According to an analysis of preliminary 2014 data, that figure is up 3% from the €58 billion achieved in 2013.

The growth spurt was mainly in the industrial sector but the healthcare and life sciences segment, along with optical components and systems, increased moderately as well, according to Optech.

Industrial photonics had a 39% share of the total photonics sector for 2014, the report says. This includes lasers and laser systems designed for materials processing and microlithography as well as components and systems for image processing, sensing, measurement, and analysis.

Other segments comprise healthcare and life science (14% of the total), energy and lighting (13%), optical information and communication (9%), and optical and opto-electronic components and systems (25%).

The €60 billion European photonics production volume for 2014 was the second largest total ever achieved. The largest volume of €62 billion was recorded for the year 2011.

–Stephen G. Anderson is the industry and market strategist for SPIE.