Photonics West was bigger, busier, and more vibrant than ever.

This year’s SPIE Photonics West was bigger, busier, and more vibrant than ever, with displays and celebrations for the International Year of Light; talks by five recent Nobel Laureates; a tribute to Nobel winner and laser pioneer Charles Townes who died in January; an extensive industry program; and high-profile presentations on optogenetics, 3D printing, silicon photonics, ultrafast lasers, smart phones for healthcare, and more.

A record 21,000 registered attendees filled the Moscone Center in San Francisco 7-12 February. The exhibition was busy well into the last day with potential buyers, browsers, and partners visiting booths of 1265 exhibiting companies, including several companies who won Prism Awards for Photonics Innovation during the event.

The closest that the world of photonics has to rock stars played to a packed house at Sunday evening’s special plenary event on super-resolution microscopy that featured talks by two of the 2014 Nobel Laureates in Chemistry and a video message by the third.

Appearing on video from Europe, Stefan Hell explained how the three scientists, working separately, were motivated by the same desire to achieve things that “could not be done – supposedly.”

Although the 1933 physics laureate Erwin Schrödinger had declared that the idea of observing individual molecules was as likely to happen as man was to raise dinosaurs, the inquisitive Hell, SPIE Fellow William “W.E.” Moerner, and Eric Betzig proved him wrong by developing super-resolved fluorescence microscopy (Hell in 1994, and Moerner and Betzig around 2000).

Today, their microscopy methods are revealing secrets of cell biology that literally have never been seen before. “Nothing is more powerful than an idea whose time has come,” Hell said. “And maybe one day, somebody will raise dinosaurs.”

Asked where the microscopy technology will have a real-world impact in the near future, Moerner said the obvious place would be in cell biology and that its impact on the medical world would ultimately be profound. “We can see so many things that we couldn’t see before,” Moerner said.

Their personal stories, each quite different, seemed to resound greatly with the audience.

Hell’s and Moerner’s routes to the Nobel were relatively conventional. But it wasn’t so for Eric Betzig, whose compelling tale involves quitting Bell Labs in the 1990s and a period in the scientific wilderness before building a super-resolution microscope from spare parts in best friend Harald Hess’s living room.

Betzig said he sees a growing role for adaptive optics in the super-resolution microscopy of the future. In combination with lattice light sheet and super-resolution techniques, “We can really get at the guts of what is going on in living cells in their normal environment,” he said.

Whether he personally sticks around remains to be seen. Going on previous form, he reckons he only has a couple more years to devote to microscopy before changing course again.

NAKAMURA AND SÜDHOF AT PHOTONICS WEST

Shuji Nakamura, who received a one-third share of the 2014 Nobel Prize in Physics for the development of blue LEDs, similarly wowed a roomful of scientists at a SPIE Fellows’ luncheon by presenting an overview of the enabling technologies for blue LEDs and their impact on today’s lighting and lighting of the future.

While Nakamura confessed that he initially selected a GaN base for the LED simply as a means to obtain his PhD as quickly as possible, the choice ultimately led to the creation of a revolutionary technology.

Thomas Südhof, who received the 2013 Nobel Prize for Physiology or Medicine for his contribution to the mapping of the cell’s transport system through vesicles, also gave a well-attended plenary talk on neurophotonics on Tuesday.

Videos of all five Nobel Laureates are available on SPIE.TV.

SPIE CEO Eugene Arthurs, calling Townes “a giant of a friend,” shared his memories of the 1964 Nobel Laureate in a tribute to the laser pioneer during the LASE plenary session.

“My career, my life were indelibly influenced by this genius,” said Arthurs, who started his career as a laser physicist. “He really was a remarkable person to know. His vision, his openness to everything, his interest in all areas of science was quite inspiring.”

One of the many impressive things about Townes was his love of his students, Arthurs noted. “Nobel laureates can be hard to pin down sometimes, but if he was asked to speak to students, he was immediately there. He loved doing that, loved giving them advice.”

In addition to winning the Nobel Prize, Townes also won the Templeton award, which is given to an individual who encourages and honors those who advance knowledge in spiritual matters, Arthurs noted.

“It is a $1.5 million award — bigger than the Nobel Prize — and anyone who had the honor to know Charles would not be surprised to know that he gave away all of the money — to Furman University (his alma mater), to a homeless shelter in Berkeley, and to a church,” he said.

Arthurs said that what struck him most about Townes was his joie de vivre, his generosity, and his boundless curiosity.

The photonics industry’s kickoff event in San Francisco also included the Prism Awards for Photonics Innovation, the SPIE Startup Challenge, and a presentation on new data from an SPIE team assessing the global photonics industry. See separate articles about these activities.

A two-day Job Fair connected prospective employees with employers with photonics jobs to fill, and more than 40 students from 29 student chapters in 17 different countries attended the SPIE Student Chapter Leadership Workshop. The workshop covered how to effectively manage and communicate within the chapter.

Technical talks during the week included optogenetics pioneer Ed Boyden from the MIT Media Lab (USA) describing how the technology can be used to treat a wide range of conditions including blindness and Alzheimer’s disease, and John Rogers of University of Illinois at Urbana-Champaign (USA) giving a keynote talk on implantable wireless optoelectronic systems.

The LASE and OPTO plenary sessions each featured three experts. 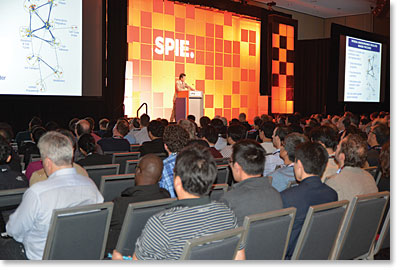 In their talks, seven BiOS Hot Topics speakers previewed the future, sharing their labs’ latest technologies for biomedical applications for treating cancer, brain disorders, blindness, and other conditions, and offering inspiration to the audience of about 800.

Rafael Yuste of Columbia University (USA) noted that the US BRAIN Initiative should help drive careers for those entering the field of brain research now. He, David Roberts, and other speakers congratulated the crowd for their commitment to providing ever-improved medical care options to the world.

In his talk, Yuste discussed his work with the BRAIN Initiative, developing methodologies to study the brain, visualize neurons, and map the connections, in order to comprehend neural circuitry in its entirety and develop treatments for such diseases as epilepsy, autism, schizophrenia, Alzheimer’s, and Parkinson’s. Neuroscientists are currently able to visualize neuron activity using calcium imaging, based on changes in fluorescence intensity or spectral properties of a dye that is sensitive to fluctuations in intracellular calcium concentrations, which is directly related with neuron activity. The Yuste group is working on expanding this technique to fast 3D imaging in the brains of living animals.

Roberts, a neurosurgeon and medical doctor from Dartmouth Hitchcock Medical Center (USA), urged the optical-scientist audience to “recruit your enthusiasm” by bringing information to neurosurgeons about the benefits of fluorescence-guided procedures on intracranial tumors. Neurosurgeons can’t always find all traces of disease with white or blue light, he said, but fluorophore technology can identify tumor cells and guide resections of intracranial tumors while protecting functional tissue. Roberts noted that 99% of neurosurgeons “have no appreciation for the information that can be obtained from these fluorescent signals. We need to bring this information into the operating room.”

Vadim Backman of Northwestern University (USA) revealed the first nanoscale measurement, chromatin-based, label-free assessment of cancer’s activity inside cells and described how his approach will allow physicians to identify pre-cancerous tissue that would otherwise be missed. Backman said test kits will reach the US medical marketplace as early as 2016, starting with a target of heavy smokers, with colon cancer screening tests to follow soon.

Brett Bouma of the Wellman Center for Photomedicine (USA) gave an upbeat talk on how diagnostic procedures using optical coherence tomography (OCT) technology have become the gold standard for detecting diseases of the eye, heart and gastrointestinal tract, looking for disease in the body — without incisions. Advances in endoscopic OCT have included a 20-fold increase in image speed, now producing 3,000 frames per second, he said. Other advances include new probes such as tethered capsules, polarization-sensitive imaging, and uses in biopsy guidance.

SPIE member Paola Taroni, a professor at the Politecnico di Milano (Italy), described a 218-patient study on collagen using light at specific wavelengths as a noninvasive way to look for breast cancer. Collagen is important as a major constituent of stromal tissue, which determines breast density, a risk factor in breast cancer. Her group devised a collagen index based on the amount of collagen in the tissue and have found that high collagen content has a high correlation with malignant lesions. The results are dramatic, said Taroni. “But we have years to go before it will help patients.”

Richard Rosen of the New York Eye and Ear Infirmary (USA) showed the power of adaptive optics (AO) techniques to detect glaucoma and problems with the eye’s rods and cones and to reveal the great complexity of retinal diseases. These OCT techniques have been used in clinical diagnosis since 1990, using an approach first used “to take the twinkle out of stars” in astronomy. They’ve been applied to the eye since 1997 to view individual rod cells at 2 microns in vivo. “AO eliminates the blur in images, showing the capillaries more clearly,” Rosen said, and can even reveal microaneurysms and how they progress in the retina.

SPIE member Peter So of MIT (USA) delved into sophisticated statistical methods in his talk on nonlinear microscopy. So explained how to come up with a “maximum likelihood estimation” through analysis with multiple measurements from multiple imaging and microscopy techniques.

“I love the melting pot that the SPIE has become,” said BiOS co-chair and SPIE Fellow R. Rox Anderson. “We are actually making a difference for people in the world. And what better for the International Year of Light?” 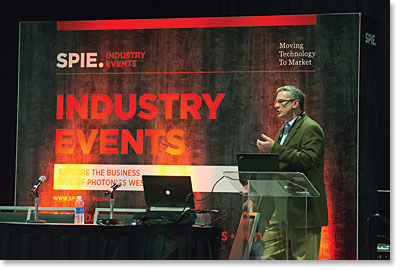 A well-attended industry panel discussion on 3D printing explored a realistic assessment of how digital manufacturing technology, applications, and markets will evolve in the near future.

A roundtable discussion on upcoming changes to the US Munitions List (USML) that will impact the International Traffic in Arms Regulations (ITAR) for both industry and research universities also drew a large number of participants.

Leading the discussion were Scott Tribble, vice president for global trade compliance at FLIR Systems and chair of the US Department of Commerce’s Sensors and Instrumentation Technical Advisory Committee, and SPIE lobbyist Jennifer Douris.

Ian Moss, an attorney with Goulston & Storrs, also led a workshop outlining what sort of business activities are affected by current rules.

SPIE Fellow Mario Paniccia, Intel fellow and CTO of the Silicon Photonics Solutions Group at Intel, predicted that 2015 will be a transitional year for silicon photonics. After decades in the lab, Paniccia said silicon photonics is finally moving into the fab, where it is poised to push next-generation photonics technologies into mass markets for telecom/datacom, high performance computing, and even consumer electronics.

Recent News
Water muting with THz optoacoustics: a breakthrough for biomedical applications
Publications
Filling the gaps
Publications
The eyes of a submarine
Technology