Europe is BIG on Lasers

Ahead of this year’s SPIE Optics+Optoelectronics 13-16 April in Prague, which highlights the technologies driving Europe’s largest high-power laser infrastructure projects, SPIE Professional profiles some of the major facilities and reviews key developments since the last gathering in 2013.

SPIE Optics+Optoelectronics covers a wide spectrum of laser-related topics such as metamaterials, fibers, and nonlinear and quantum optics, and applications ranging from holography, to radiation sources, to X-ray FEL instrumentation and medicine. A laser energy workshop during the week will include speakers and discussions on inertial fusion energy, the HiPER laser energy project, Orion, Laser Megajoule, and other laser facilities in Europe and elsewhere. (Read more about the event here.) 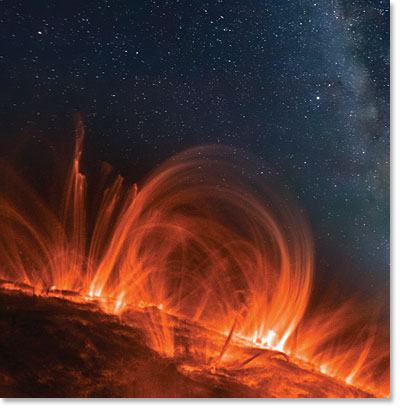 The Orion laser/plasma interaction facility at the Atomic Weapons Establishment (AWE), based in Aldermaston, conducts research into high-energy density physics phenomena, such that occur at the heart of a nuclear explosion. It is designed to support the UK government’s deterrent program, but the UK’s Ministry of Defence has also permitted a small amount of availability for other purposes, such as collaborative academic research.

The Orion building houses a large neodymium glass laser system and a target chamber in which the high-energy density physics experiments are conducted. Orion delivers up to 5kJ at 351nm in 10 x 1ns-duration-beams with flexible pulse-shaping, and up to 500J in ~0.5 ps at 1053nm in each of two short-pulse beams, one of which is frequency-doubled (at reduced aperture) to give increased contrast.

Orion enables the study of matter many times denser than solid – at temperatures up to 10 million degrees Celsius. It gives scientists the opportunity to study densities and temperatures found nowhere else on Earth. It is a newly established facility, which started operations in 2013 when the conditions necessary to commission the large array of plasma diagnostics were achieved. These diagnostics cover spatially, temporally, and spectrally resolved optical, X-ray, and particle instruments.

The Central Laser Facility (CLF) at the Science & Technology Facilities Council’s (STFC) Rutherford Appleton Laboratory near Oxford provides scientists from the UK and Europe with access to a range of state-of-the-art-technology. CLF is a partnership among its staff and representatives of UK and European universities.

Facilities include advanced, compact tunable lasers, which can pinpoint individual particles, and high-power laser installations that recreate the conditions inside stars.

The CLF’s associated Centre for Advanced Laser Technology and Applications (CALTA) has been established to take advantage of scientific developments within the CLF and exploit this technology for new applications and scientific knowledge for the benefit of UK economic growth.

Funding for development for DiPOLE has come directly from CLF/CALTA as well as external commercial contracts from international institutes and European projects, including HiLASE in Czech Republic and Helmholtz-Zentrum-Dresden-Rossendorf in Germany.

More recently, CALTA has been awarded joint funding from the STFC and the Engineering and Physical Sciences Research Council (EPSRC) to build a second “DiPOLE 100” system for the High Energy Density (HED) beamline for the European X-ray Free Electron (XFEL) in Hamburg, Germany.

The Max Planck Institute for Quantum Optics (MPQ) Laboratory for Attosecond Physics (LAP), in Garching bei München, employs more than 100 researchers affiliated with Ferenc Krausz of Ludwig-Maximilians-Universität München and MPQ or one of the six associated groups who joined forces in pursuit of LAP’s research objectives.

Krausz is one of four plenary speakers at SPIE Optics+Optoelectronics in April.

Laszlo Veisz leads the Light Wave Synthesizer 20 (LWS-20) group at MPQ, which is a subgroup of Krausz’s team.

Asked about the notable recent developments by this key laser R&D group, Veisz said the main activity of the LAP is the application of the LWS-20 in laser-plasma physics.

The world’s first multi-terawatt near-single-cycle light source is expected to benefit fundamental research: “Scaling the power and photon energy of attosecond pulses will open new avenues in exploring electron phenomena via attosecond extreme vacuum ultraviolet (XUV)-pump or -probe spectroscopy and attosecond X-ray diffraction, respectively,” Veisz said. “Using this light source as a driver of high harmonics from atomic gases and over dense plasmas, we can pursue proof-of-principle studies to these ends.”

The pending Extreme Light Infrastructure (ELI) Beamlines facility, under construction in Dolní Břežany, outside Prague, is conceived to be a high-energy, high-repetition-rate laser pillar of the ELI project. This facility will provide users with a variety of short-pulse, high intensity beamlines.

ELI’s scientific and technological development activities are distributed in five research activities, each of them aiming to realize a significant component of the overall research infrastructure. The major systems are the High-Power Laser System and High-Brilliance Gamma Source, both with specifications well beyond existing facilities and offerings.

Within the three other research activities, local teams will develop state-of-the-art instrumentation for experiments in the emerging field of laser-driven nuclear physics. They are:

The Beamlines facility is the first of three laser centers to be built under the ELI project. The ELI attosecond center is planned for Hungary, and Romania will host the ELI nuclear physics facility.

In the European XFEL, the Hamburg area will soon boast a research facility designed to generate ultrashort X-ray flashes — typically 27,000 times per second and with a brilliance a billion times higher than that of the best conventional X-ray radiation sources. Developers say the facility will be unique when it starts working in 2017, opening completely new research opportunities for international scientists and industrial users.

While the facility celebrated a “topping out” of its headquarters building in Schenefeld in February, Thomas Tschentscher, scientific director of the XFEL, said the construction is still ongoing. The first X-ray light will be seen at the end of 2016 and it will start user operations in 2017-2018, he said.

Since the XFEL was conceived as a user facility, “we will provide FEL radiation in the soft and hard X-ray regime on six scientific instruments, which will have certain dedicated instrumentation areas,” he said.

“At least 30 potential users are set to write user proposals for time-share scientific experiments,” he said. “We will review these and appropriate groups will be invited here to conduct their experiments. As it is an X-ray machine, the likely areas of R&D include all sorts of natural sciences and physics in the fundamental direction, based on intense, ultra-short pulses.

Laserlab-Europe, the Integrated Initiative of European Laser Research Infrastructures, the facilities of which are distributed throughout the continent, describes itself as “the central place in Europe where new developments in laser research will take place in a flexible and coordinated fashion beyond the potential of a national scale.”

The consortium currently brings together 30 organizations in laser-based interdisciplinary research from 16 countries.

Laserlab-Europe’s main objectives are to maintain a sustainable interdisciplinary network of European national laboratories; to strengthen Europe’s leading role in laser research through joint research activities; and to offer access to state-of-the-art laser research facilities to researchers from all fields of science and from any European lab.

Using a system of high-powered lasers as a driver, HiPER encompasses a suite of technical approaches to achieving controlled fusion reactions in pellets of deuterium/tritium fuel. The aim is to raise the fusion fuel to a temperature and density sufficient to ‘ignite’ it, inducing a propagating burn wave within the fuel. This fusion reaction will yield high-energy gain from the flux of energetic neutrons released.

To do this, it will use an all-optical method of energy generation called “fast ignition,” with fuel compression and fuel heating as two separate processes.

Twelve nations are involved in the HiPER project, which is currently in the technology development phase. A location has not yet been determined.

An update on the project will be provided at the laser energy workshop at SPIE Optics+Optoelectronics 15-16 April.

The goal of Laser Mégajoule (LMJ), being built near Bordeaux by the French nuclear science directorate, CEA, is to recreate, in the laboratory, thermodynamic conditions similar to those encountered during the operation of a nuclear weapon. It will allow theoreticians and weapon designers to test predictions against actual fusion.

The laser-based inertial confinement fusion research device is expected to deliver about 1.8 MJ of laser energy to its targets, making it about as energetic as the National Ignition Facility (NIF) in the US.

An update on this project will also be presented at SPIE Optics+Optoelectronics.

The Bose-Einstein Condensation and Cretan Matter-Waves group of Laserlab-Europe partner IESL-FORTH on Crete, Greece, demonstrated the brightest atom laser to date in 2014.

Researchers removed a fundamental limitation in the outcoupling of an atom laser from a Bose-Einstein condensate, which allowed them to demonstrate an atom flux seven times larger than what was previously possible.

An atom laser emits a beam of coherent atoms in much the same way as an optical laser produces a beam of photons. Such a beam of atoms may be used for atom lithography or for precision measurements of, for example, rotation, gravity, and magnetic fields.

Romanian Laserlab-Europe partner Institute for Laser, Plasma & Radiation Physics (INFLPR), together with the Horia Hulubei National Institute for Physics and Engineering, is planning to create a new European Center of Excellence in LAser and Radiation Applications (CLARA) on the existing Magurele platform near Bucharest in Romania.

The new Center for Advances in Laser Technologies (CETAL) infrastructure at Magurele supports the most powerful laser in Europe, producing 1 petawatt, 25fs pulses.

In addition, Magurele is the site of the nuclear physics branch of the Extreme Light Infrastructure, with two 10-petawatt lasers under construction and planned to be operational in 2017. 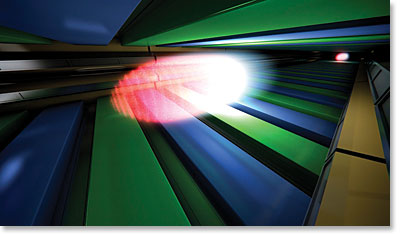 Greg Clark, the UK minister for Universities and Science and member of Parliament, announced in December 2014 that the UK will invest up to £30 million to become the 12th full member of the European XFEL facility.

“This funding will enable the generation of intensely bright and short duration X-ray flashes when operational in 2018,” he said. “It will open areas of research for British scientists at the atomic, molecular, and nano-scale level that are currently inaccessible.”

John Womersley, CEO of the UK’s Science & Technology Facilities Council, said he was excited to be building on the UK’s own national capabilities and facilities to “allow the UK to develop entirely new scientific opportunities.”

–Matthew Peach is a contributing editor to optics.org and director of Original Content Ltd. He has written about the photonics industry since co-launching Optics & Laser Europe in 1992.