He received the annual SPIE award at SPIE Photonics West in February. The award recognizes outstanding lifetime contributions to the field of biomedical optics through the development of innovative, high-impact technologies and comes with a $2,000 honorarium. 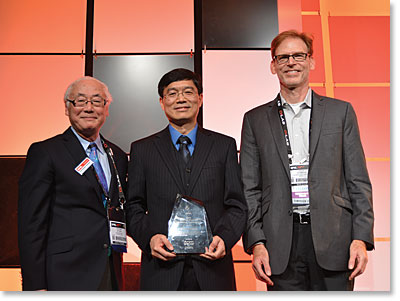 Photoacoustic tomography is expected to impact biology and medicine broadly by providing multiscale in vivo functional and molecular imaging of structures ranging from subcellular organelles to organs, enabling a noninvasive look at subcutaneous tissue at a deep level.

The US National Institutes of Health awarded Wang a $1.1 million grant for research on imaging the electrical activity of neurons deep inside the brain, in conjunction with the BRAIN (Brain Research through Advancing Innovative Neurotechnologies) initiative. The initiative is a part of President Obama’s focus on accelerating the development of innovative technologies that help understand the human brain.

A book he co-authored, Biomedical Optics: Principles and Imaging, won the 2010 Joseph W. Goodman Book Award and was recognized in the Britton Chance Award citation as the most practical text in the field.

The submission date for nominating individuals for the Britton Chance Biomedical Optics Award and the Biophotonics Technology Innovator Award has been changed to 1 July.

Nominations for the 2016 awards submitted after 1 July 2015 will not be considered until the following year.

Nominations for other SPIE awards are due 1 October. All SPIE award nominations are considered active for three years from the submission date.