The International Year of Light and Light-based Technologies (IYL) is off to a brilliant start, with thousands of scientists, diplomats, government officials, educators, students, artists, business executives, and others across the globe participating in hundreds of events to celebrate the many uses of light in our lives.

From the annual lantern festival in Taiwan attended by an estimated 8 million tourists, to a Laser Fun Day at the University of Arizona (USA) for 1400 students of all ages, to the gala festivities at the official IYL opening ceremony in Paris, the first three months of the year-long celebration have certainly raised awareness about how light is central to human activities. 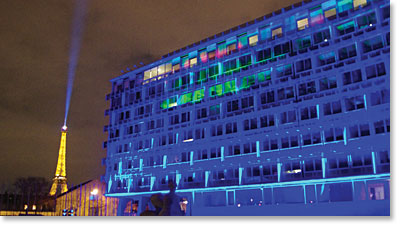 The Eiffel Tower and the UNESCO building were bathed in light for the official IYL opening in Paris.

“The IYL has been brilliantly successful in inspiring many thousands of people,” SPIE CEO Eugene Arthurs said after an event in March. “From the start, the observance has been well-received by the photonics community as a celebration of their contributions to the betterment of life on the planet.” Arthurs noted that many events, displays and presentations have helped raise awareness among the nontechnical community also.

UN Secretary-General Ban Ki-moon officially opened the year-long celebration during a two-day ceremony in January at UNESCO headquarters in Paris. In a video message to more than 1000 international diplomats and decision makers, Nobel laureates, CEOs, and science and industry leaders, he noted that light and light science have made vital contributions to global challenges in energy, education, industry, healthcare, and agriculture.

Optical technologies for instantaneous communication across the globe and into space, simple lighting, inexpensive eyeglasses, and solar power were among the many and varied applications of light celebrated at keynote lectures, symposia, and round-table discussions 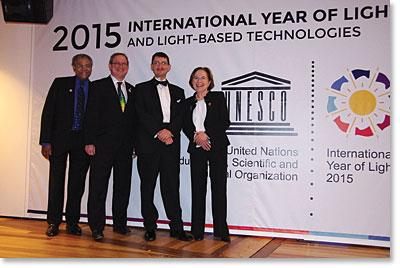 In Spain, the IYL opening ceremony took place 16 February at the Poliorama Theatre of the Royal Academy of Sciences and Arts of Barcelona with 500 attendees.

“It’s an opportunity that we must not let get away,” said Yzuel, chair of the Spanish Committee for the IYL, said. “We must promote the knowledge of how the science of light and light-based technologies improves our daily lives.”

Invited speakers included Arthurs; Caterina Biscari, director of the ALBA Synchrotron (Spain); and Jeroni Nadal, coordinator of the Retina Department and the Macula Unit at the Clínica Barraquer (Spain). 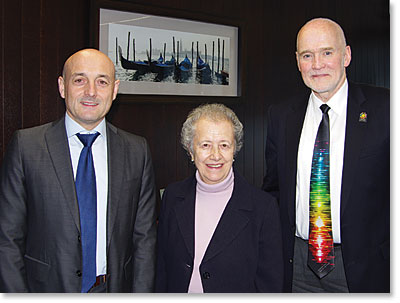 A UK-wide launch hosted by Prince Andrew, the Duke of York, at St. James’ Palace in London 28 January was followed by celebratory events in Wales, Northern Ireland, and Scotland in February.

“The International Year of Light is about how we have used light over the centuries,” said Prince Andrew, an IYL patron in the UK. “It is about how we are applying light, photonics, and various other aspects in order to make the world a better place, not only for ourselves, but for future generations.” 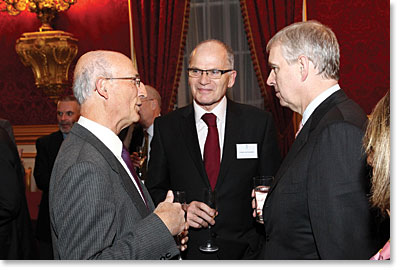 The 5 February kickoff event in Wales at the National Assembly was attended by representatives from the photonics industry, culture, and research, including Edwina Hart, the Welsh Minister for Economy, Science and Transport; Taylor; Julie Williams, Chief Scientific Advisor for Wales; and Louise Jones, Knowledge Transfer Manager at ESP KTN. Alan Shore of University of Bangor organized the event.

The IYL 2015 launch in Scotland 23 February was held at the Royal Society of Edinburgh with an evening of science, exhibitions, demonstrations, music, and poetry. Exhibits included the demonstration of the ‘laser harp,’ an instrument made of lasers and detectors that played musical notes when the beams were broken.

Other displays in Scotland explored topics such as optical detectors to identify explosives and lung disease. There were also lectures during the evening, including one that combined poetry, photography, and light-based science, and another celebrating the life and work of Edinburgh-born physicist James Clerk Maxwell.

Two events in Germany celebrating the IYL drew a number of prominent scientists and industry representatives. And the IYL officially kicked off in the Netherlands at a meeting 19 January in Amsterdam.

The 30th Stuttgart Scientific Symposium, chaired by Wolfgang Osten, a member of the SPIE Board of Directors and a professor at the Institut für Technische Optik (ITO) at University of Stuttgart, was dedicated to the IYL. Speakers at the 25 February event included Osten; Yatagai; Arthurs; SPIE Fellows James Wyant (USA), Anand Asundi (Singapore); and Andreas Ostendorf (Germany); and Michael Mertin, president of JENOPTIK (Germany) and Photonics21.

The daylong program included a presentation to Hans Tiziani, an SPIE Fellow who founded the first optics colloquium in Stuttgart in 1984, and culminated with light artists Jorg Miedza and Timo Rehpenning demonstrating real-time light art and long-exposure images.

An IYL event in Munich 27 February saw the reopening of the planetarium of the Deutsches Museum Munich and a series of talks by scientists and photonics industry representatives. Some 250 participants included Edward Georg Krubasik, president of the German Physical Society; Olaf Berlien, CEO of OSRAM; and Nobel Laureate Stefan Hell of the Max-Planck Institute.

The IYL web page lists all the IYL events during the year. A few other IYL celebrations in the first quarter included: