Wearable computers may change the way humans live and interact.

One of the creators of Google Glass thinks that the next generation of wearable computers may change the way humans live and interact as much as anything in the last 50 years. 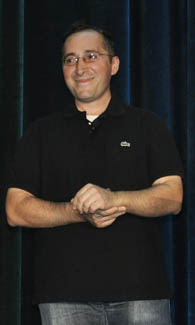 SPIE member Babak Parviz, formerly of Google X and now a vice president at Amazon, was one of several technologists at SPIE Optics + Photonics 2014 in August who discussed the market for wearable optics and the latest advances in these futuristic devices.

Parviz told a plenary audience that the era of wearable technologies may see computing power suddenly become more mobile and versatile than many would have predicted.

Stressing that his remarks had no particular connection with Amazon, Parviz said that the smart phone was merely the leading edge of a revolutionary and more personalized form of global communication.

The big question, he said, is: “What could potentially come after this?” The answer: Something even more compact, miniature, and personal.

One potential answer has been Google Glass, a product that rests comfortably on the face, yet in Parviz’ words is “strange, different from what we’ve seen before.”

GOAL IS TO BE INCONSPICUOUS

In the future, a user could immediately access highly connected computing power by simply glancing at a display, Parviz said. Such a system would also allow access to a world seen through the eyes of the wearer.

New devices, Parviz said, could shorten the time needed to access information from the Internet down to just a few milliseconds, even bypassing the need for a browser. “You would just ask,” he said.

“Google Glass is a solid first step,” said the Amazon executive, who also led a project to develop “smart” contact lenses before leaving Google to join the online retailer. 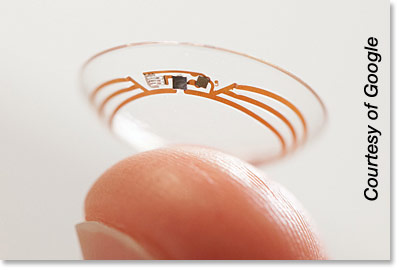 “Eventually the technology should just disappear,” he said. “It should seamlessly integrate into our daily lives. It has to be unobtrusive and just let you live your life.”

Parviz noted that optics and photonics technologies, already widely employed in the manufacture and operation of today’s devices, will provide the major tools for future wearable technology, via miniaturization, transducers, increased computing power, and ultralow-power displays.

Another plenary speaker who worked on Google Glass, SPIE member Anurag Gupta, echoed Parviz’ comments about the unpredictable road ahead for optical sensors in the consumer market. In a talk about designing such products, Gupta said some of the specifications will have to come from the consumers themselves.

“People need to feel it, live with it, and decide what they like about it,” Gupta said. “The end of the journey may be something that someone would never have thought of in a million years.”

Gupta said optical engineers ought to invest the time to properly discover specifications throughout the R&D chain as well as from consumers rather than just implement arbitrary specifications from company bosses.

Gupta said he is applying that engineering design process to his new work on sensors for home automation products. In addition to the Nest, a smart thermostat, those products include motion detectors and smoke detectors that can be switched off by simply waving an arm.

Yet another innovator who has worked on displays for Google, SPIE Fellow Bernard Kress, chaired a session on wearable displays and made a presentation on the segmentation in the market for helmet-mounted displays (HMD).

The market includes optics for smart glasses; headsets for augmented reality (AR) and virtual reality (VR); and HMDs for applications in defense, gaming, firefighting, and healthcare.

He gave a thorough comparison of the field of view for displays currently available, from the 15-degree FOV of Google Glass to the 115 degrees of the VR application Oculus Rift.

Kress agreed with his Google colleagues that the perfect see-through optical eyewear for the consumer market has yet to be discovered, because it must have a large eye box at conventional eyewear vertex distances, high pixel count, and large, rescalable FOV. The eyewear must also allow seamless integration of meniscus prescription lenses as well as sensors for eye, gesture, and perhaps brain.

Sarayeddline compared its performance and benchmarked its specifications against Google Glass and other competitors. He said the challenges that remain in the development of augmented reality glasses include:

SPIE Professional launched its “Photonics for a Better World” series in the SPIE member magazine five years ago.

Do you have a question or comment about these articles? Do you have a story to contribute about how optics and photonics technologies benefit humanity? Write to us at spieprofessional@spie.org.