The global photonics market is worth at least US$156 billion.

The global photonics market is worth at least US$156 billion, according to new data SPIE has developed as part of a continuing effort to provide information to industry leaders and academic researchers seeking to communicate the impact of the field.

The numbers on the worldwide photonics core components market were the second phase in a yearlong SPIE initiative. The first phase was announced at SPIE Photonics West in February where Anderson reported similar data for 1008 of the more than 1500 exhibiting companies at the BiOS Expo and Photonics West Exhibition.

The SPIE team’s next project will focus on the size of photonics-enabled markets worldwide. 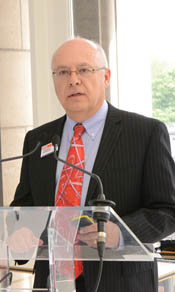 The latest study aggregated photonics-company sales and employee data using information from Dun & Bradstreet (D&B) as well as public information and regional statistical benchmarks derived from an SPIE analysis of D&B data. For companies not reporting to D&B, the team reviewed the data that seemed out of range, prorating revenue and employment based on estimates of actual photonics-related sales. Companies with total sales of less than US$10 million were assumed to be 100% photonics.

“The data has been welcomed by industry audiences around the world,” Anderson said, and appreciated for its transparency, “which is an important factor for credibility.”

The impact of being able to provide policy makers with estimates about the jobs and revenue generated by the photonics industry is evident in regions such as Europe, where photonics has been identified as one of six Key Enabling Technologies (KET), Anderson added.

“The KET recognition has helped pave the way for photonics projects to apply for major funding initiatives,” he said, and it has helped raise the profile of the field among young people planning their careers.

OPTICS IN PROPOSED US LEGISLATION

In other developments that support the photonics industry, SPIE leaders applauded the first-ever inclusion of language on optics and photonics in proposed legislation to reauthorize the America COMPETES Act.

Introduced in July by the Senate Committee on Commerce, Science, and Transportation, the America COMPETES (Creating Opportunities to Meaningfully Promote Excellence in Technology, Education, and Science) Reauthorization Act of 2014 recommends that federal agencies work with optics and photonics industry and research partners and support internal programs to leverage knowledge and resources and to promote innovation.

The bill asserts, “Optics and photonics research and technologies promote US global competitiveness in industry sectors, including telecommunications and information technology, energy, healthcare and medicine, manufacturing, and defense.”

SPIE CEO Eugene Arthurs commended the committee and its chair, Sen. John (Jay) Rockefeller, noting that the recognition “underscores the vital roles that applications of these technologies play in the lives of people everywhere.

“We are gratified and delighted to see support for optics and photonics in this legislation,” he said, adding that SPIE members and partners were grateful for Rockefeller’s vision and that of his committee in including the language.

The America COMPETES Act first became law in 2007 and was reauthorized in 2010. It was intended to drive investment in innovation through R&D, and to improve the competitiveness of the United States in the global marketplace.

Optics and photonics have also achieved new recognition in other policy areas over the past several months as SPIE has expanded its long-held mission of advocating for the photonics industry through its role as a founding sponsor of the National Photonics Initiative (NPI). Through the NPI, founders, sponsors, and supporters work as a collaborative alliance to raise awareness of photonics and drive US funding and investment in key photonics-driven fields.

As a result of these efforts, photonics was specified by the US Department of Defense in its request for information last summer on focus areas for new proposed Institutes for Manufacturing Innovation. It was also identified by the National Science Foundation as a key area of interest for research and education.