Researchers at the National Institute of Standards and Technology (NIST) in the United States have started gathering hyperspectral signatures that could help provide doctors a noninvasive and painless way to discriminate between healthy and diseased tissue and reveal how well damaged tissue is healing over a wide area.

NIST researcher and SPIE member David Allen says the advantage of using hyperspectral imagers is that they can see many different things that humans can’t see and that this additional information can be used for a wide range of applications.

However, Allen notes that in order to realize the full potential of hyperspectral imagers for medical diagnoses and security applications, “We need to develop reference standards that represent human skin.

“Standards development has itself been hindered by a lack of human-skin reflectance data, especially in the ultraviolet and short-wave infrared,” he adds. “This data is valuable in evaluating sensor performance for these applications in addition to assuring consistent results between labs.”

Catherine Cooksey, the project leader for the NIST spectrophotometry program that establishes and maintains the national scale of reflectance, says researchers need to know what so-called “normal” tissue looks like. Furthermore, she says researchers are looking to quantify the variability both within an individual and between individuals due to inherent biological differences and to gauge the overall range of spectral variability across the human population. 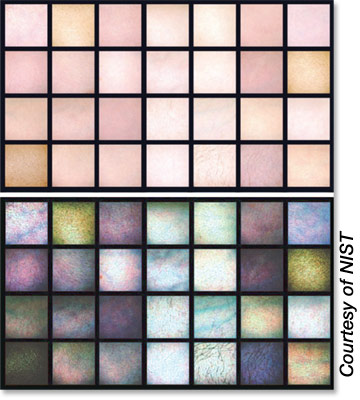 The top images show skin as normally viewed. At bottom are hyperspectral images of the same skin with enhanced contrast in false color to show the variability between subjects.

“Skin reflectance varies due to skin pigmentation, tissue density, lipid content, and blood volume changes,” Cooksey says. “And few, if any, studies of skin reflectance have been done with an estimated measurement uncertainty that is traceable to NIST or any other national metrology institute. We need good data from a wide variety of sources, and for that we need the help of our colleagues in the community.”

Once they collect enough data, the NIST researchers can feed it into NIST’s Hyperspectral Image Projector, a device that creates hyperspectral scenes that have all the spectral signatures of the real thing. Medical imaging technicians can then use these “digital tissue phantoms” to test their imagers’ ability to discriminate between not only different tissue types, but also tissue and other materials.

This will support further development of hyperspectral imaging for medical imaging as well as numerous other applications, such as search and recovery, surveillance, and biometrics.

Allen and NIST colleagues described their Hyperspectral Image Projector in a paper presented at SPIE Photonics West in 2012 (dx.doi.org/10.1117/12.907898).

Researchers interested in collaborating with NIST to gather a larger skin reflectance dataset should contact Allen (dwallen@nist.gov) or Cooksey (catherine.cooksey@nist.gov) for more information.

Allen, Cooksey, and SPIE member Benjamin K. Tsai were co-authors at SPIE DSS in May on a paper about the initial trial. Their paper is available in the SPIE Digital Library at dx.doi.org/10.1117/12.2053604.

Allen, along with NIST researchers Maritoni Litorja and Jeeseong Hwang are Journal of Biomedical Optics guest editors for a special section on optical medical-imaging standards.

The special section will be published in 2015. Manuscripts are due 1 December 2014.