In bestowing the award in August, the SPIE Board of Directors also cited their appreciation for Levinson’s service to SPIE and the greater optics and photonics community. 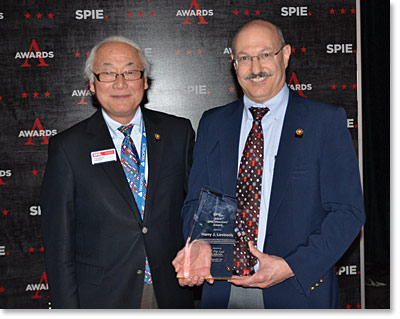 He presented a paper on technological innovations for a sustainable business model in the semiconductor industry at SPIE Optics + Photonics in August. The paper explains how the increasing costs of wafer processing, particularly for lithographic processes, have made it difficult to achieve simultaneous reductions in cost-per-function and area per device.

Multiple patterning techniques have made possible the fabrication of circuit layouts below the resolution limit of single optical exposures, Levinson says, but have led to significant increases in the costs of patterning. To address this problem, innovative techniques, such as self-aligned double patterning (SADP) have enabled good device performance when using less expensive patterning equipment.

His talk also covered innovations that have directly reduced the cost of manufacturing and the technical challenges that must be overcome to enable a return to single-exposure patterning using short-wavelength optical techniques, such as EUV patterning.

Levinson has served as conference and symposium chair at SPIE Advanced Lithography, been an active member of many SPIE committees, and is the former chair of the SPIE Publications Committee. He is also a former member of the SPIE Board of Directors.

Other SPIE awards announced earlier this year include the SPIE Gold Medal of the Society, the society's highest honor, to James Harrington of Rutgers University and the Frits Zernike Award for Microlithography, which was presented to Mordechai Rothschild of MIT, Lincoln Laboratory for significant contributions to the advancement of lithography through the exploration and demonstration of DUV/VUV materials, lasers, and systems.
.