Researchers at University of California, Riverside have created a laser-based sensor to classify different species of insects with up to 99% accuracy, a development that could help farmers protect their crops from insect damage and limit the spread of insect-borne diseases such as malaria and dengue fever.

Over the past 60 years, insect classification research has been limited by factors such as an overreliance on acoustic sensing devices, a heavy focus on wingbeat frequency, and limited data.

The researchers overcame those limitations by building an inexpensive, wireless bug sensor that can track many insect flight-behavior patterns and generate much larger amounts of data that can be incorporated into classification algorithms.

With dozens of sensors running in parallel 24 hours a day for three years, the UC Riverside researchers have collected tens of millions of data points, more than all previous work in this field combined.

“We set out not knowing what was possible,” said Eamonn Keogh, a computer science professor at UC Riverside’s Bourns College of Engineering. “Now, the problem is essentially solved. We have created insect classification tools that can outperform the world’s top entomologists in a fraction of the time.”

Keogh, along with Yanping Chen, a computer science graduate student and project lead; Adena Why, an entomology grad student; Gustavo Batista of the University of Sao Paulo in Brazil; and Agenor Mafra-Neto, of ISCA Technologies in Riverside, conducted their research with a couple dozen plastic containers, each holding up to 100 insects and connected to an optical sensor. 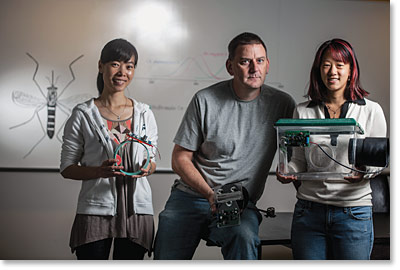 The goal is to make this automated classification method as simple, inexpensive, and ubiquitous as current methods such as sticky traps and interception traps, but with digital advantages such as higher accuracy, real-time monitoring and the ability to collect additional flight-behavior patterns.

In their experiments, the UC Riverside researchers worked with six species of insects. As they added additional insect flight-behavior patterns (wingbeat sounds, location, height at which the insects fly, etc.) to their classification algorithm, they were able to increase their success classifying the different species.

While some blanket methods of killing unwanted insects have been successful, they can be costly and create environmental problems. The sensor developed by UC Riverside researchers aims to change that by counting and classifying the insects so that the substance used to eradicate the harmful insects can be applied on a precision-targeted level.

Keogh – who originally developed the sensor with LEGO materials, a 99-cent laser pointer, and a piece from a television remote control – believes the sensors can be built for less than $10 and be powered by solar power or a battery that lasts a year.

In the next year, Keogh plans to focus on deploying the sensors worldwide. They are currently being used on a small scale in Brazil and Hawaii. Keogh is also working with Tovi Lehmann, an entomologist with the Laboratory of Malaria and Vector Research at the National Institute of Allergy and Infectious Diseases in Maryland, to deploy them in Mali.

Laser technologies make the world better by classifying insects to help farmers and health professionals and by killing malaria-carrying mosquitoes. Lasers allow surgeons to operate on tissue one cell at a time and tell farmers the best time to irrigate their fields.