Light painting and more to show light in all aspects of life.

With only a few months before the official launch of the International Year of Light and Light-based Technologies 2015, “light painters,” optics educators, astronomers, and others have already begun to shine a light on the central role that our science discipline plays in art, culture, medicine, communications, and sustainable societal development. 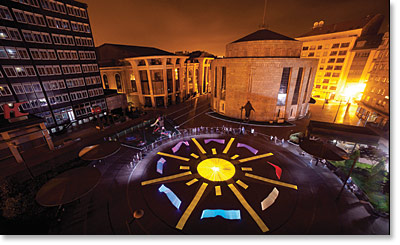 In an elaborate and literal shining of light over the summer, light painters in Spain, gathered in Oviedo to recreate the International Year of Light 2015 (IYL) logo using light-painting technology and long-exposure cameras on 15-meter lifts.

Measuring 44 meters in diameter, the light-painting photograph of the colorful logo was created by 33 artists and covered Plaza de la Gesta.

Light painting is a photographic technique in which artists manually apply light sources to a scene and take a single long-exposure photo frame, usually in complete darkness.

“Light-painting artworks are very beautiful evidence of light’s influence on the human mind in the creation process,” said Sergey Churkin, the LPWA founder who acted as creative director for the project. 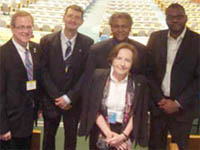 SPIE member John Dudley (pictured second from left), chair of the IYL2015 Steering Committee, called the light-painting display a “perfect example of how the science of illumination technology can combine with artistic design to create works of beauty and inspiration — and raise awareness of the International Year of Light and its goals.” IYL2015 is a global initiative adopted by the UN to raise awareness of the importance of light and light-based technologies.

SPIE is a founding sponsor of IYL2015. Its lead graphic designer, Bryan Hintz, created the logo with graphic elements representing sunlight, colors of the spectrum, and international flags. The circular composition signifies the unifying light-producing power of light.

Long-exposure photography like light painting has been around since the early days of daguerreotypes. Early artistic light-painting photographs were introduced in the early 20th century by master artists Laszlo Moholy-Nagy, Man Ray, and Picasso.

Since those early days, light painting has evolved to become a genre that is growing in sophistication and popularity across the globe.

Churkin notes that there is a common misconception that Photoshop or other post-processing software is used in these photographs because of the surreal and psychedelic effects that are created.

While artists use a variety of light sources from simple flashlights, lasers and LED lights to ignited steel wool, electric wire, and pyrotechnics to illuminate their photographic composition, only minor adjustments are made to the photograph after the photo is taken.

The linkage between optics, photonics, and art — especially photography — is longstanding. Optics is the essence behind any and every camera. Photography not only allows us to capture moments in time, but also things otherwise invisible to the human eye.

Beginning with revelations by notable figures like Mo-Ti, Aristotle, and al-Haytham, the camera obscura helped humans better grasp the behavior of light and paved the way for modern-day photography. Over time, photography developed into an art form, and different types of photographs could be created by manipulating certain properties of light.

SPIE has played an extensive role in sharing groundbreaking research in photographic technology and optical engineering all over the world through publications and conferences. For decades, SPIE has explored the connection between optics and photography and shared breakthrough discoveries with the international optics and photonics community.

In 1983, for example, SPIE published the proceedings from the International Congress on High Speed Photography and Photonics. In a paper that focused on the importance of exposure time, Harold Edgerton explains how scientists and photographers alike were discovering how to produce photographs based on flash sources and velocity of the subject.

(SPIE presents the annual Harold E. Edgerton Award to recognize outstanding contributions to the application and understanding of high-speed phenomenon.)

Today, our understanding of photography and how to manipulate light to produce high-quality photographs has developed far beyond that. Just last year, the SPIE journal, Optical Engineering, published an article explaining the way in which a digital synchroballistic schlieren camera was used to capture photographs of bullets and rocket sleds moving at more than 400 meters/second.

While light painting is concerned with long-exposure photography, the scientific community is constantly seeking innovation in high-speed photography. Whether the photograph is made with an ultralong or ultrashort exposure, all photos involve proper control over exposure, resolution, and ISO, among other properties. Fundamentally, the ability for a photographer to produce great photos— whether scientific or as an art form — relies on technology rooted in optics and photonics.

With continual advancements in photography, especially since the commercialization of digital cameras, the story of light continues to be told in art, health, and cultural traditions throughout the world.

A Story of Light Festival, for instance, is being planned for January in Goa, India. Part of the IYL2015 celebration, the festival aims to promote science education among youth and encourage the public to think about light technologies for sustained development and improved quality of life.

Panelists and audience members at SPIE Optics + Photonics this year described other events being planned around the world, including those with creative hands-on activities for young children and adults and competitions like the SPIE International Year of Light Photo Contest to help engage both technical and nontechnical audiences.

Voting for the “People’s Choice Award” in the photo contest will be held in 2015.

Other plans for the IYL 2015 observance in India include events where people can build solar cookers, participate in a solar vehicle contest, receive a vision exam, and learn about the eye and eye safety, Chakraborty said.

SPIE Senior Member Cristina Solano of Centro de Investigaciones en Optica (CIO) in Mexico and recipient of the 2014 SPIE Educator Award, described a wide range of plans in Mexico, including a telescope-building workshop and a laser graffiti competition.

In Australia, the IYL year will start out with a literal bang: SPIE Fellow Halina Rubinszstein-Dunlop, a councillor for the Australian Optical Society, said that New Year’s fireworks celebration in Sydney — the first in the world each year due to its time zone — will be dedicated to the IYL 2015.

Numerous organizations in Australia and New Zealand are working together and “going global” in their approach, she said, by working with the public and government as well as academia and industry. Other activities will emphasize light in art and architecture as well as in science and technology.

Audience members at the panel at Optics + Photonics shared ideas as well. Among them:

IYL2015 EVENTS ACROSS THE GLOBE

More than 52 nations have agreed to organize campaigns and events in their regions for the International Year of Light and Light-based Technologies. A list of events and the national contacts are available on light2015.org.

In addition, the International Commission for Optics (ICO), the Synchrotron-light for Experimental Science and Applications in the Middle East (SESAME), and the International Astronomical Union (IAU) are planning IYL2015 events.

Observances include monthly monitoring of light pollution with the International Globe at Night program; SciFest: Power of Light in Joensuu, Finland, 23-25 April; and “Study after Sunset,” a program to raise awareness about the 1.5 billion people around the world who have poor-quality lighting at night.

In addition, SPIE is funding the Light Beyond the Bulb program, a series of open-source exhibits showcasing the incredible variety of light-based science.

The IYL2015 opening ceremony will be held at UNESCO headquarters in Paris, 19-20 January.

Links and other IYL resources

— Have a question or comment about this article? Write to us at spieprofessional@spie.org.

— To receive a print copy of SPIE Professional, the SPIE member magazine, become an SPIE member.