New research in nanoscience and optical engineering, visions for next-generation wearable technology, a two-day conference celebrating 50 years of optics research at the University of Arizona, and inspiration for the International Year of Light 2015 provided a few of numerous highlights at this year’s SPIE Optics + Photonics.

Information about the International Year of Light and Light-based Technologies 2015 (IYL 2015) was everywhere, and panelists sharing ideas about their countries’ plans energized their audience about finding their own ways to observe IYL 2015.

Ana María Cetto of Universidad Nacional Autónoma de México, who traveled to UNESCO and the UN to petition for the IYL 2015 declaration, urged attendees at the SPIE Women in Optics reception to find ways to share the message of the importance of light to people in all walks of life.

Special events included the 13th annual SPIE Student Chapter Leadership Workshop, the Optics Outreach Games, a panel discussion on the 2014 SPIE Optics and Photonics Salary Survey, and a two-day conference celebrating the 50th anniversary of the Optical Sciences Center (OSC), now known as the College of Optical Sciences, at University of Arizona (USA).

In addition to the conferences’ proceedings, which will be available in the SPIE Digital Library, summaries of plenary talks and selected papers and other news and photos from the meeting are posted at spie.org/OPnews. 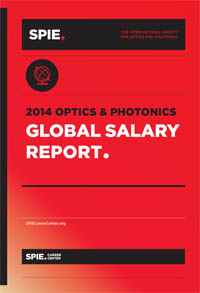 Three highly successful, well-established photonics professionals added their perspectives on the salary survey, especially on job satisfaction in academia, government, and industry within the optics and photonics industry.

Panelists were SPIE Board members Maryellen Giger of University of Chicago (USA) and James Grote of the US Air Force Research Lab along with SPIE Technology Strategist Bob Hainsey, a former researcher and manager for Intel and ESI.

All three cited team success and the ability to serve as a mentor among their top personal satisfactions, and each also cited a trend toward constrained or shrinking budgets as a major challenge.

Grote said that for him, freedom in pursuing his research as well as the opportunity to teach part-time was more important than high pay. He said working in research rather than program management will support development of marketable skills and mobility. He urged the audience to do work they enjoy — a message echoed by Giger and Hainsey.

Asked about the survey’s finding that women earn 40% less than men overall, Giger said she had long thought this wasn’t an issue — until she saw some data several years ago that proved the discrepancy. Gender bias surfaces in many ways, she said, such as better letters of recommendation written for men than for women with comparable skills and background and a miniscule percentage of women CEOs.

Hainsey said he really enjoyed management, particularly for the opportunity to build an outstanding team that worked well within the organization, created high-quality products, and met with success. His experience in collaborating with academia was analogous to Giger’s, whose university’s business development office actively supports translation of technology to products.

The annual SPIE salary survey of the global optics and photonics industry was included in the print edition of SPIE Professional in July and is available online at spiecareercenter.org.

50 YEARS OF OPTICS AT UNIVERSITY OF ARIZONA

SPIE Fellow James Wyant, an SPIE past president who was director of the OSC and dean when it became a college in 2005, opened the conference on Fifty Years of Optical Sciences at the University of Arizona by outlining the milestones and achievements throughout the tenures of each director and dean.

Wyant noted that Aden Meinel, the founding director, did some important things right, including establishing the college in a central location on campus, having the director report directly to the provost, and hiring faculty with a broad range of expertise, including industry experience.

Meinel also emphasized the importance of writing papers, making hardware, and cultivating interdisciplinary research approaches with other departments at the university, Wyant said. Being underfunded by the state of Arizona turned out to be an asset, he added. “We were forced to get contracts to grow the program,” he said.

Wyant’s talk and others covering OSC research areas will be published in a special hardcover conference proceedings volume.

At a reception during the week, SPIE member Thomas Koch, current dean of the college, announced that 24 graduate student scholarships have been funded this year through a “Friends of Tucson Optics” program that Wyant enabled with a $10 million matching gift.

SPIE is among the 24 individuals and groups who endowed scholarships through the program. 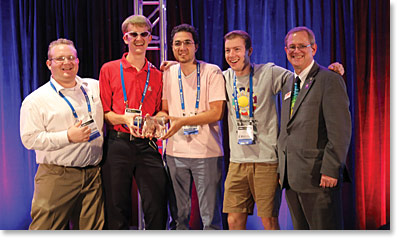 Students from University of Arizona celebrate their award with SPIE President H. Philip Stahl, at right.

Vidya Jyothi of the Institute of Technology (India) accepted the first-place prize for “Fun with Optics.”