The global electricity infrastructure is being transformed. Just as computer chips and cell phones have brought about the information revolution, power generation by photovoltaic (PV) solar panels is revolutionizing energy production around the world.

The progress in PV technology over the last four decades has been phenomenal. By the end of 2012, the global, cumulative, installed solar PV capacity topped the 100-gigawatt (GW) mark and is expected to reach the 200 GW milestone in 2015. In the next eight to 10 years, the cost of PV electricity generation and storage is expected to reach $0.02 per kilowatt hour (kWh).

Based on current trends in the reduced costs of installed PV systems and batteries, it is evident that local generation of direct current (DC) power by PV technology will emerge as a dominant source of low-cost energy in the 21st Century.

One hour of incident solar energy, used as a free fuel and source of sustainable energy, is equal to all of the energy used in one year on Earth.

This infrastructure can be replaced by more energy-efficient and low-cost microgrids, a small-scale version of the main grid that could connect or disconnect with the larger grid, and nanogrids, which could generate, store, and distribute power without connectivity to the main grid.

The use of AC power to service DC loads results in a significant amount of energy loss. However, most of the electric load is spent on cell phones, laptops, air conditioners, light sources, home appliances, and other devices that operate on DC power.

Reducing energy costs is particularly critical for the manufacturing industry, which, in some cases, spends as much as one-third of its operating cost on electricity. Microgrids and nanogrids that would cover a small town or a few dozen homes could capitalize on the advancements in power electronics, low-power electronics, computation, communication, and local-power generation by PV.

Today in many parts of the world, PVs generate electricity without subsidies and are cost competitive compared to the electricity generated by heavily subsidized fossil-fuel sources and nuclear reactors.

Approximately 2.5 billion people in the developing world rely on biomass (fuel from wood, charcoal, and animal dung) to meet their energy needs for cooking and other daily necessities. The continued decrease in the cost of PV-generated electricity is now making it possible to provide electrical energy to those 2.5 billion people entirely by PV-generated DC electricity within the next five years.

So PV technology combined with a DC energy-distribution system will provide badly needed clean alternatives to dirty sources of fuel.

In contrast to developed economies, where replacing an aging electricity infrastructure is a challenge, developing and/or underdeveloped economies have no such infrastructure, and implementing a new low-cost, DC-power-system infrastructure is a much easier proposition. A PV-based DC nanogrid is the most practical low-cost method of providing cost effective electricity to such developing societies worldwide. In addition, the market size is huge and the societal implications are monumental.

The United Nations and World Bank, along with developed, developing, and underdeveloped countries, need to work together to invent new real or virtual business models that are vertically integrated and take out as many middlemen as possible. Since underdeveloped countries do not have the technology or capital to manufacture PV systems, a new business model could combine the purchasing power of those countries into a single entity, and the developed or developing economies would get a huge market share without much investment in marketing.

With the current status of PV technology, there are misconceptions about the efficiency of solar cells. The efficiency of current commercial non-concentrator PV modules is in the range of about 12 to 22 %. The most important factor is the cost ($/watt) of PV modules.

The efficiency of PV systems directly affects the amount of land needed for their installation and also has a minor impact on the cost of other components of the systems.

Currently, more than 90% of the PV market is based on low-efficiency bulk silicon solar cells due to their lower relative cost.

Since 2006, the thin-film PV module market has been declining and will continue to decline. Today, the only research direction that currently holds promise for further reduction of PV module cost is a multi-junction architecture consisting of a silicon solar cell and abundant-material-based thin-film solar cell because it is the only possibility that meets manufacturing requirements. 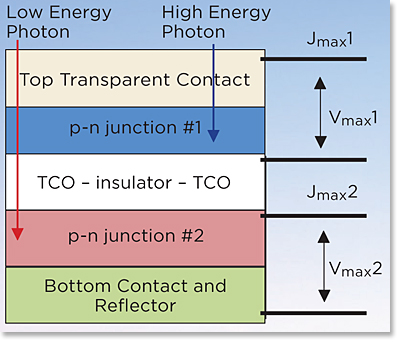 Schematic of the proposed two-junction, four-terminal solar cell above.

The schematic diagram, above, shows a two-junction, four-terminal device architecture that we describe in our 2013 paper, “Making Solar Cells a Reality in Every Home: Opportunities and Challenges for Photovoltaic Device Design.”

There are a number of opportunities where the optical community can play a major role in further reducing the cost of PV modules. However, to significantly reduce the manufacturing cost, researchers must prove these concepts at laboratory scale with efficiency much higher than their lower-efficiency commercial counterparts.

Light-management concepts (e.g. plasmonics) that are not used in current commercial PV modules must be proven either using a device architecture shown above or thin-film solar cells used for building integrated PVs.

Advanced process control based on low-cost optical devices can reduce the difference between the efficiency of laboratory-scale solar cells and commercial thin-film PV modules.

The success of concentrator solar cells in terrestrial applications remains an engineering challenge for the modern optical engineer.

–SPIE Fellow Rajendra Singh, director of the Clemson University (USA) Center for Silicon Nanoelectronics and the D. Houser Banks professor in the Holcombe Department of Electrical and Computer Engineering, is the recipient of the 2014 SPIE Technology Achievement Award. With over 35 years of industrial and academic experience, he is a leading expert in PV devices and manufacturing of semiconductors and PV modules. In April, he was honored by US President Barack Obama as a White House “Champion of Change for Solar Deployment” for his leadership in advancing solar energy with PV technology. His PhD in physics is from McMaster University (Canada).

Rajendra Singh, director of the Center for Silicon Nanoelectronics at Clemson University (USA), is receiving the 2014 SPIE Technology Achievement award in recognition of his efforts in the elucidation and exploitation of photonic effects in rapid thermal processing (RTP) for semiconductor manufacturing and his technical leadership of photovoltaic technology.

Singh, an SPIE Fellow, pioneered RTP of silicon, which has been critical to reducing the thermal budgets of furnace processing, reducing costs and production timelines. The RTP-related semiconductor equipment manufacturing industry is valued at over $1 billion per year.

His innovations also include the development of (rapid) photothermal processing where light (typically ultraviolet) is used in concert with heat to facilitate annealing.

SPIE Fellow John Ballato, director of the Center for Optical Materials Science and Engineering Technologies (COMSET) at Clemson and the university’s vice president for economic development, called Singh, “not only a pioneer, but a visionary,” noting that Singh “predicted 30 years ago that silicon would remain the dominant photovoltaic material, which has proven to be true.”