A year's worth of activities will highlight the importance of light-based technologies.

The International Year of Light and Light-based Technologies (IYL2015) will not officially begin until January 2015, but SPIE and other founding sponsors of the global initiative have been busy planning a year’s worth of activities to highlight to the citizens of the world the importance of light-based technologies in their lives, for their futures, and for the development of society.

Well before the 19-20 January 2015 kickoff event in Paris, SPIE has organized a photography contest that begins in July 2014. The Society will also provide additional funding to SPIE Student Chapters for outreach during IYL2015 and has issued a call for papers for a special section on light’s impact on medicine and biology in the Journal of Biomedical Optics.

The United Nations General Assembly in December 2013 proclaimed 2015 the International Year of Light to promote improved public and political understanding of the central role of light in the modern world and to celebrate significant scientific anniversaries occurring in 2015. The initiative is led by UNESCO, supported by 100 partners from more than 85 countries, and coordinated by the European Physical Society (EPS) and the International Centre for Theoretical Physics (ICTP).

"An International Year of Light is a tremendous opportunity to ensure that international policymakers and stakeholders are made aware of the problem-solving potential of light technology,” said SPIE member John Dudley, chair of the IYL2015 Steering Committee. Dudley, a professor at Université de Franche-Comté and EPS president, added, “We now have a unique opportunity to raise global awareness of this.”

SPIE Professional magazine is coordinating a photography contest to celebrate IYL2015. The competition for US $4,500 in cash prizes is open to any photographer in the world beginning 1 July.

Photos showing the vital role that light and light-based technologies play in daily life will be judged on artistry, scientific interest, and technique for the top three prizes. A “People’s Choice Award” will allow members of the optics and photonics community and the general public to decide on a fourth prize in the photography contest.

In line with the IYL’s goal of raising awareness about light-based technologies, SPIE is committed to reaching as many citizens of the world as possible through the International Year of Light Photo Contest.

SPIE members can encourage friends, neighbors, family, and co-workers to photograph light in their everyday lives and enter the contest.

Judges will include members of SPIE Student Chapters from around the world as well as other experts in optics, photonics, and photography.

Since the top photos will be published on the covers of the print edition of the SPIE member magazine in 2015 and displayed in large format at SPIE Optics + Photonics 2015, only print-quality digital files will be considered.

Submissions will be accepted through 30 September 2014.

In addition to the education outreach grants that SPIE provides to non-profit organizations each year, a special allocation of grant funding specifically for the IYL2015 activities of SPIE Student Chapters has been established.

"SPIE continually works to raise awareness of photonics technology,” said SPIE CEO Eugene Arthurs. “We are especially interested in educating the world about technologies that bring the world clean and energy-efficient lighting, solar power, and practical photonic devices for applications such as environmental monitoring, disease diagnosis and treatment, and water purification.”

JOURNAL TO EMPHASIZE IYL 2015 IN BIOPHOTONICS

The Journal of Biomedical Optics plans to celebrate the International Year of Light with a special section in June 2015 on “Light for Life,” the revolutionizing impact of light on medicine and biology.

Papers will be accepted through 1 October 2014 on optics and photonics technologies that allow for noninvasive disease screening, diagnosis, and treatment monitoring and that enable novel approaches for disease detection, optical biopsy, or surgical guidance such as laser immunology and photodynamic therapy.

A “Hot Topics” session at the 2015 SPIE/OSA European Conferences on Biomedical Optics (ECBO) will also be dedicated to the theme of “Light for Life,” and those who plan to participate in ECBO 2015 are encouraged to submit their research to the journal as well.

IYL2015 IS ABOUT RAISING GLOBAL AWARENESS

The ICTP will act as Global Secretariat, and Philips Lighting announced earlier this year that it would be a patron sponsor.

Philips will support a key IYL2015 program focusing on energy-efficient solutions for over 1.5 billion people around the world for whom nighttime means either darkness or the dim glow of an unhealthy kerosene lamp or candle. 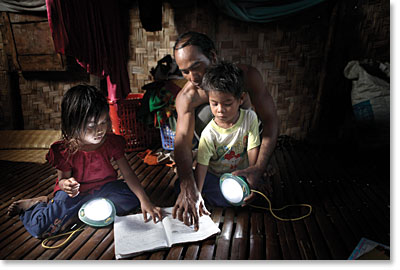 Rural Cambodians make use of a MoonLight, a solar-powered lantern designed to replace the often-dangerous kerosene lamps that are typically found in villages throughout Cambodia and the developing world. The Kamworks lantern uses energy-efficient LED bulbs and is powered by a small solar cell. (Mathieu Young Photography)

With specific emphasis on the impact this has on educational opportunities, Philips will participate in the "Study after Sunset" program to promote the use of portable solar-powered, high-brightness LED lanterns in regions where there is little or no reliable source of light.

Philips’ participation will help illustrate “the potential for solid-state lighting to bring the lighting revolution to millions in the developing world and reduce the need for new power sources in the developed world,” said SPIE President H. Philip Stahl, who serves on the IYL Steering Committee.

At SPIE Photonics Europe in April, Dudley urged his colleagues to become involved in any way they can to spread the word about all the possibilities light can bring to society, especially in developing countries. Advances in light-based technology are crucial for sustainable development, he noted. They open up new educational horizons, preserve cultural heritage, and address issues of climate change.

"Study after sunset is not possible in many countries,” he said. “Let's help bring light to the entire world."

GET INVOLVED WITH THE INTERNATIONAL YEAR OF LIGHT

There are many ways for you to get involved in the IYL2015 celebration.

Contribute to the IYL blog and use #IYL2015 on Twitter.

Volunteer to host one of the numerous “Light: Beyond the Bulb” exhibits in 2015. This program of international exhibitions for the International Year of Light will showcase light-based science in museums, cafes, shopping malls, airports, and other public places to engage citizens of the world who might not regularly seek out science.

Organizers and volunteers will have access to a free, online repository of high-quality images and resources with which to create a “Light: Beyond the Bulb” exhibit showing the scientific, cultural, economic, and political aspects of light. The crowd-sourced project will be expert-curated for science content and beauty.

Other websites to get you started in the celebration:

The International Year of Light has four themes for 2015.

“Science of Light” activities will show how studying the fundamental scientific properties of light impacts widely on all fields of science, technology, and engineering.

“Tools for the Future” will highlight examples of light as an enabling technology in medicine, communications, and energy. This theme will also focus on emerging applications in the study and preservation of cultural heritage.

“Light for Development” will promote low-carbon-emission lighting technologies such as those using solar power for environmental sustainability and improving the quality of life in the developing world. This theme will also stress the need for applying photonic devices and technologies in agriculture, disease prevention, and water purification.

“Pioneers of Light” will draw attention to the human stories and contributions that have been made by major figures in science.

IYL2015 will also celebrate these and other anniversaries:

The opening ceremony for the International Year of Light will be held 19-20 January 2015 in Paris.

The kickoff event will feature talks by several optics and photonics luminaries, including Nobel Laureate and former US Energy Secretary Steven Chu.

SPIE Fellow Charles Townes, who received a Nobel Prize for his pioneering work with masers and lasers, and Nobel Laureate John Mather have recorded greetings that can be seen on SPIE.TV.

Photographers of all ages and from around the world are eligible to submit a maximum of two photos that show light or a light-based technology used in everyday life. Photos are not required to be scientific but they should hold some scientific interest and/or communicate the International Year of Light theme.

In addition to being published in the SPIE member magazine, photos judged to be finalists will be displayed in large format at SPIE Optics + Photonics 2015. Only print-quality digital files between 5 and 20 MB will be accepted.