SPIE Fellow Pramod Rastogi of the Federal Institute of Technology (ETH Zürich) in Switzerland received the 2014 Dennis Gabor Award at SPIE Photonics Europe in April in recognition of his outstanding accomplishments in diffractive wavefront technologies.

Rastogi was honored for his groundbreaking research in the development of high-resolution and multi-component parametric phase formulation methods for the simultaneous estimation of multiple phases and their derivatives from holographic interference patterns. 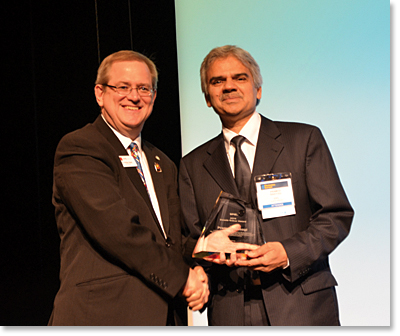 “I consider Rastogi one of the undisputed leaders in the field of holography and optical metrology,” said SPIE Fellow Pietro Ferraro of the Istituto Nazionale di Ottica (Italy).

Rastogi has served as symposium, conference, and session chair at SPIE events, and he authored an extensive trilogy dedicated to optics in Switzerland in three 1995 issues of the SPIE journal Optical Engineering. He is also co-author of the 1996 SPIE Milestone Series book, Selected Papers on Electronic Speckle Pattern Interferometry, and has edited several notable books on optical metrology, including holography.

Nominate a professional colleague for an SPIE award

Nominations may be made through 1 October and remain active for three years from the submission date, except for the SPIE Early Career Achievement Award and the Goodman Book Writing Award.