Researchers at University of Washington (USA) have developed a new diagnostic procedure combining elastography and optical coherence tomography (OCT) that improves the accurate assessment of in vivo tissue stiffness, often an indicator of disease.

Elastography aims to noninvasively and quantitatively assess the mechanical properties of soft tissues to complement structural imaging. Extensive research has been conducted in the past 15 years to develop elastography methods based on OCT. With its micron-scale resolution and submicron-scale sensitivity, OCT is envisioned in particular for elastography of ocular tissues but could also be applied to skin layers or vascular walls.

The Ruikang K. Wang and Matthew O’Donnell research groups at UW have implemented transient elastography using phase-sensitive OCT to track propagating shear waves in soft tissues. They estimate the shear wave speed at each point of the imaging region to reconstruct maps of tissue stiffness, which are good indicators of pathological states.

In “Shear wave pulse compression for dynamic elastography using phase-sensitive optical coherence tomography,” an open-access article published in January in the Journal of Biomedical Optics, Thu-Mai Nguyen and her colleagues report on the use of coded excitations to obtain high signal-to-noise ratio shear waves and enhance the spatial resolution and accuracy of the stiffness map.

The research team used a piezoelectric actuator to induce propagating shear waves in tissue-mimicking phantoms. A milliseconds-long, linear-frequency-modulated signal (chirp) drove the actuator and resulted in a broadband shear wave, from 1 to 5 kHz.

A phase-sensitive, spectral-domain OCT setup tracked and recorded the displacements. In a post-processing phase, “pulse compression” of the displacement field was performed using an inverse filter designed to compress all the energy spread in the chirp into a short, localized, high-energy mechanical pulse. 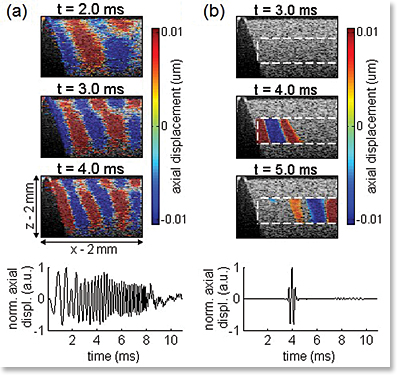 Figure 1, above, shows the displacement field in a 0.5%-agar phantom resulting from a chirp excitation before (a) and after (b) compression, displayed at different instants. The shear wave is induced from the left side of the phantom and propagates to the right. Bottom plots show temporal profiles of the displacements at one given location.

Figure 1a shows snapshots of the propagation of the linear-frequency-modulated shear wave. Figure 1b shows the same displacement field after compression. A gain of more than 12 dB was obtained through the compression.

Figure 2, above, shows the results obtained in a phantom containing a stiff inclusion that appears on the stiffness map with a high contrast.

The Journal of Biomedical Optics article reports that the pulse compression approach has advantages over conventional monochromatic excitations because the signal-to-noise ratio of the detected shear wave is improved. In addition, the compression ensures a spatio-temporal localization of the shear wave, allowing the filtering out of artifacts caused by multiple reflections of the shear wave in highly heterogeneous tissues.

Combined together, these two effects lead to a better estimation of tissue stiffness in terms of accuracy and spatial resolution. The authors are now conducting studies on replacing the actuator with a non-contact shear source for clinical investigations.

–SPIE Fellow Lihong Wang is editor-in-chief of the SPIE Journal of Biomedical Optics.