James Harrington’s 30 years of pioneering R&D in specialty fiber optics and IR optical materials has been difficult and distinguished, but often unrecognized, according to SPIE Fellow M. J. Soileau, vice president of research and commercialization at the University of Central Florida (USA).

Harrington’s work has led to the development of IR transmissive fiber optics and similar applications in spectroscopy, laser power delivery, medicine, chemical and thermal sensing, and defense. The hollow-glass waveguides (HGW) he developed more than a decade ago with students at the Rutgers University Laboratory for the Development of Specialty Fiber Optics (USA) are one of the university’s most actively licensed technologies.

In recognition of his innovative work, Harrington will receive the 2014 SPIE Gold Medal at SPIE Optics + Photonics in August.

Harrington, an SPIE Fellow and the 2002 SPIE president, is also being honored for growing single-crystal sapphire fibers using a laser-heated pedestal and for developing diffusing-tip silica fibers for photodynamic therapy and prostate surgery and IR fibers for use in military-warning receivers.

Harrington’s work “has been a major factor in the successful application of infrared lasers to medicine and national defense,” Soileau notes. 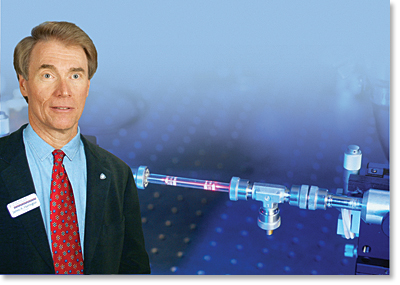 The hollow-glass waveguide as it appears within the femtosecond laser amplifier system.
Image courtesy of the University of Colorado and NSF.

The HGWs are a perfect example of that. An attractive alternative to other solid-core IR fibers, they have a relatively simple structure and potential low cost. A key feature of HGWs is their ability to transmit wavelengths well beyond 20 µm and their air core, which allows for high-power laser delivery.

HGWs were originally intended for the delivery of CO2 laser radiation in laser surgery, but they have found use as fiber links in spectroscopic and thermometric applications, such as the identification of chemical species and the measurement of temperature radiation. 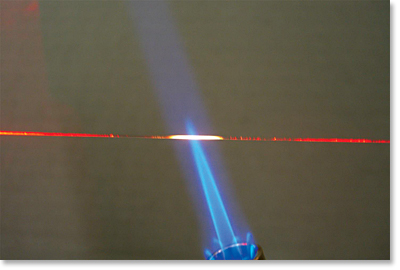 In 2005, Harrington received a Jefferson Science Fellowship from the US State Department and worked for one year as a science adviser in the Bureau of International Security and Nonproliferation. There he assisted in establishing controls for dual-use technologies such as lasers and detectors, which are used in both military and commercial goods.

In an interview with Rutgers Magazine, Harrington pointed out that laser-equipped machines that carve contact lenses could, with slight modifications, be used to shape missile parts.

“Before licensing these kinds of technologies for export, the government needs to ensure safeguards to block such modifications,” he said.

Other technologies Harrington reviewed for the State Department included photodetectors, such as those used in night-vision cameras, and superconductors used in scientific instrumentation and high-energy physics research.

After returning to Rutgers, Harrington remained a State Department consultant for another six years, as stipulated by the fellowship program. 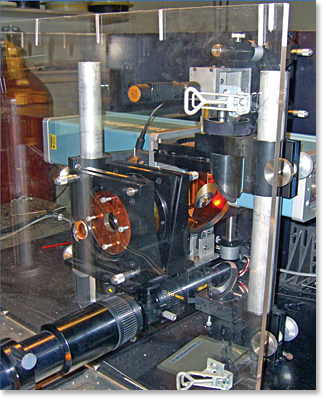 Over the years, Harrington has served in many SPIE leadership roles, including on the Board of Directors; the Ethics Committee; and the Publications and the Engineering, Science, and Technology Policy (ESTeP) committees, which he chaired for several years.

“Jim has a great understanding of SPIE that has developed during his many years of service and his views always reflect a rational and well-thought-out perspective,” says SPIE Fellow and Board Member John Greivenkamp of the University of Arizona (USA). “Jim has had significant impact on SPIE and this impact continues even though it has been a few years since his term as SPIE president.”

In the early 1990s, Harrington became an SPIE representative to the International Commission for Optics (ICO). In 2008, the same year he received the 2008 SPIE Directors’ Award, he was elected treasurer of the ICO, a position he maintains today.

In the 1980s, Harrington helped organize the first conference on IR fiber optics at an SPIE meeting in California (USA). The conference continues today, having morphed into "Optical Fibers and Sensors for Medical Diagnostics and Treatment Applications" at Photonics West.

“I will always remember the warm welcome and support that we received from SPIE,” he says. “And it is still true after all these years.”

Information about the recipients of the 2014 SPIE Britton Chance Biomedical Optics Award, the SPIE Biophotonics Technology Innovator Award, and the Frits Zernike Award was published in the April issue of SPIE Professional.

SPIE award nominations may be made through 1 October and remain active for three years from the submission date, except for the SPIE Early Career Achievement Award and the Goodman Book Writing Award.