GoalControl-4D, a GLT system from Germany, brings optical technology to the playing field with the hope of eliminating the sometimes-controversial decisions on goals that can plague the “Beautiful Game.”

FIFA tested GLT systems during tournaments in 2005 and 2007, but the systems were dismissed as not accurate enough. After a bad call during the 2010 World Cup in South Africa, where a referee disallowed a goal that was later proven to be good, GLT was considered “no longer an alternative but a necessity," according to FIFA president Sepp Blatter.

In July 2013, FIFA’s rule-making body, the International Football Association Board (IFAB), made the historic decision to approve the use of GLT in football. Per FIFA’s Testing Manual 2014 for GLT, “the objective of goal-line technology is not to replace the role of the officials, but rather to support them in their decision-making.” 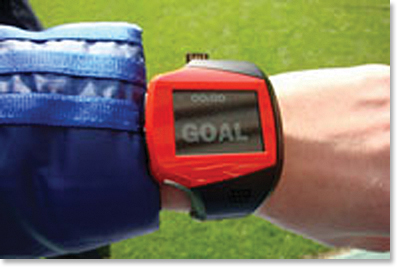 The referee’s watch vibrates and flashes the word “GOAL” when the ball crosses the goal line.
THE TESTING PROCESS FOR GOAL-LINE TECHNOLOGY

The Swiss Federal Laboratories for Materials Science and Technology tested nine GLT technologies over several months in 2011 and 2012 and chose four companies as final contenders.

CAIROS and GoalRef, both from Germany, used magnetic fields around the goal and a chip inserted into the ball. HawkEye (UK) and GoalControl used a 3D imaging system to determine the exact location of the ball.

GoalControl won a tender process (submitting an offer or proposal to a prospective buyer) in April 2013 but was subject to further testing at the 2013 FIFA Confederations Cup before being signed on for the 2014 World Cup in Brazil. GoalControl met all FIFA requirements and correctly determined all 68 goals during the match. Also important to FIFA was the high rate of satisfaction and acceptance by referees and officials.

According to FIFA, the decision to go with GoalControl was based on “criteria relating more specifically to the tournaments in Brazil, including the company's ability to adapt to local conditions and the compatibility of each GLT system in relation to FIFA match operations.” 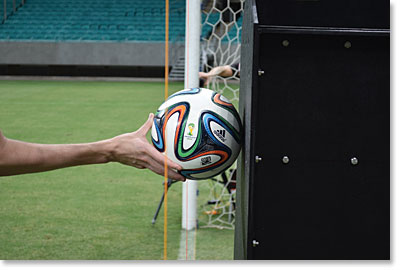 The GoalControl system was thoroughly tested before installation in Brazil. (Images courtesy of FIFA.) .
HOW GOAL-LINE TECHNOLOGY WORKS

The GoalControl-4D system uses 14 high-speed cameras set up around the pitch, along the stadium catwalk, in each of the 12 stadiums. Seven cameras focus on the area directly in front of each goal.

An image-processing system connected to the cameras tracks the movement of all objects on the field and hones in on the ball by filtering out players, referees, and other moving objects. The system precisely determines and records the ball’s three-dimensional x-, y- and z-position so all goals or near-goals can be reviewed.

Each referee can confirm a goal within one second by signals sent to his/her wristwatch. The watch (right) vibrates and flashes the word “GOAL” when the football crosses the goal line.

Replays from conventional TV systems can’t always show exactly how the ball was positioned relative to the goal line when it passes through, an issue that has caused controversial calls in the past. The GoalControl system offers real-time image analysis from seven angles without a time delay. TV viewers at home and fans watching giant LED screens in the stadium can see the 3D animated-sequence replays.

With a dedicated technology evaluating each goal as it happens, the referee receives clear evidence to aid making the correct call.

The World Cup competition began 12 June as the print issue of SPIE Professional was being printed. The final game of the tournament is 13 July.

Read more about goal-line technology in the SPIE Newsroom:

'PHOTONICS FOR A BETTER WORLD' SERIES IS 5 YEARS OLD

SPIE Professional launched its "Photonics for a Better World" series in the SPIE member magazine five years ago.

Read more articles and blog posts celebrating the many ways that optics and photonics are applied in creating a better world: