Sunshine in a Suitcase

WE CARE Solar is making the world better through photonics.

For the last six years, CNN has honored 10 people from around the world as CNN Heroes of the year. These are people working to make a difference through various projects such as cleaning up polluted environments, providing housing for the poor, and bringing produce to “food deserts.”

One of the 2013 Top 10 CNN heroes, Laura Stachel, co-founder of WE CARE Solar, is making the world better through photonics. 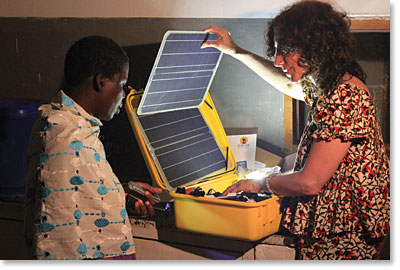 In most western countries, childbirth is an event to be celebrated, but people in many African cultures say, “When you become pregnant, you have one foot in the grave.” In the Republic of Malawi, the Chichewan word for pregnancy, “pataki,” means “between life and death.”

According to a 2010 World Health Organization report, almost 99% of pregnancy-related deaths occur in Africa and Asia, with more than half of those deaths occurring in sub-Saharan Africa.

In 2008, Stachel, a US obstetrician based in California, traveled to Nigeria for doctoral studies. At the time, Nigeria had one of the highest maternal mortality rates in the world. While observing an emergency cesarean at a state hospital, the lights suddenly went out. Stachel was surprised by the nonchalant attitude of the staff for whom this was a common occurrence. The procedure was completed by the light of Stachel’s own flashlight.

Stachel learned that power outages are common in African hospitals, and many clinics are without any electricity altogether. Midwives in Nigeria have long resorted to using kerosene lanterns, candles, or even cell phones while delivering babies. Stachel knew these methods were not efficient during delivery complications where direct light was needed.

“I realized my skills as an obstetrician were useless without light and electricity,” Stachel told CNN. “Once I witnessed the situation, I had to do something about it and let people know the conditions facing women giving birth.”

Traveling “light" with a solar suitcase

Stachel asked her husband, Hal Aronson, a solar-energy educator, to design an off-grid solar electric system for use in maternity wards and operating rooms. She asked for a demonstration kit easy enough for her to use and small enough to fit into her suitcase so she could get through customs without raising suspicions. So Aronson designed a prototype of a larger system that would eventually be installed.

The bright yellow “WE CARE Solar Suitcase” encloses a complete solar electric system, including two solar panels, a sealed lead-acid battery, a charge controller, and two acrylic-encased LED lights. The suitcase also contains outlets to charge cellphones and a fetal heart-rate monitor. The “plug and play” system is easy to operate and is designed to withstand heat, rain, and rough treatment.

The Nigerian hospital used the Solar Suitcase until a larger solar electric system was installed. One year after the installation, the hospital reported a 70% decrease in maternal deaths. Requests for solar lighting soon came in from surrounding clinics with similar lighting problems.

Since then, requests have come from around the world and more than 400 clinics now use the portable power kit.

Although Stachel’s original plan was to meet the needs of women and newborns, community centers, orphanages, and refugee camps have also requested the Solar Suitcase.

The units were used by medical teams after the 2010 Haiti earthquake and the 2013 typhoon that ravaged the Philippines. According to Stachel, “we’re really just on the tip of an iceberg.” 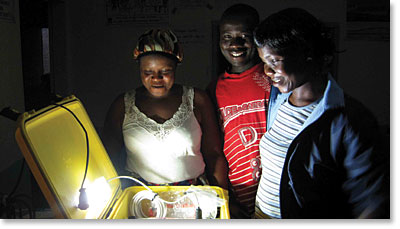 The Women’s Emergency Communication and Reliable Electricity (WE CARE) Solar Suitcase was designed in 2008 to provide lighting solutions for maternal health clinics in Nigeria.

The brainchild of Stachel and Aronson, the suitcase was meant to serve as a model for a larger solar power system. The portable suitcase proved so useful, especially in rural areas, that requests for the small units began pouring in.

At first, Aronson assembled the units with help from students and volunteers, but as demand increased, Stachel and Aronson realized they needed to step up production on a larger scale.

They founded the non-profit WE CARE Solar and began applying for grants to help fund production by a California manufacturer.

To date more than 400 units have been delivered, and plans are under way to expand production and update the system as needed.