Showcase for next generation of clean-energy entrepreneurs

A lone coyote patrolled a scrub-filled field next to one of the abandoned runways of the former Marine Air Station El Toro in Irvine, CA. But not far away, 19 homes equipped with the latest innovations in solar design and engineering teemed with visitors.

More than 60,000 people came to the site at Orange County Great Park over two long weekends in October for the 2013 Solar Decathlon.

It was the sixth time the Department of Energy (DOE) sponsored the event in the United States but the first time outside of Washington, DC. Besides the obvious benefits of exposure to a new audience, the contest made the best of the more dependable California sunshine, although there was some rain one day, and the first weekend was a challenge with hot temperatures and 50-mph Santa Ana winds.

The Solar Decathlon is a showcase for optics and green photonics technologies and innovative energy-efficient design that prepares the next generation of innovators and entrepreneurs in clean-energy technology.

Competing university teams designed and built houses of under 1000 square feet over a two-year period. The structures were then shipped to California and reassembled. For eight days in October, thousands of visitors toured the solar-powered, energy-independent homes at the former military air base.

The decathlon consists of judging in 10 categories ranging from energy efficiency in doing a load of laundry to more subjective areas like hosting and preparing a dinner for fellow competitors in their solar houses.

Team Austria, the first-place winner overall, was made up of students from the Vienna University of Technology. The second-place finisher was Team Las Vegas (University of Nevada Las Vegas). Team Czech Republic, from the Czech Technical University, finished third.

But bragging rights for the best solar home are not limited to those three entries. The University of Southern California earned the most points in the Appliances contest, outperforming the rest in running its refrigerator, freezer, washer, dryer, and dishwasher, to mimic the appliance use of an average US house.

And it wasn’t just a cliché, but “everyone was a winner” in the Energy Balance contest. All teams earned the full 100 points for producing at least as much energy as their homes needed during the contest week. 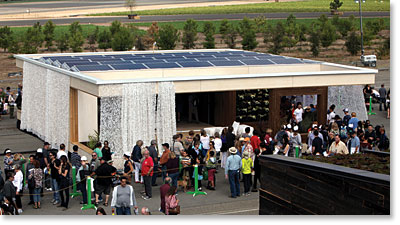 A line of visitors at the Team Austria house, built by students from Vienna University of Technology, after it won the 2013 Solar Decathlon.
Stefano Paltera/US Department of Energy Solar Decathlon

At the end of the competition, fewer than seven points out of a possible 1000 separated the top three finishers. The People’s Choice Award for the visitors’ favorite house in the competition went to the University of North Carolina at Charlotte.

The Austrian team finished third in the Engineering contest to clinch the win. The Engineering winner was Team Ontario (Queen’s University, Carleton University, and Algonquin College), and the Czech Republic team was second. 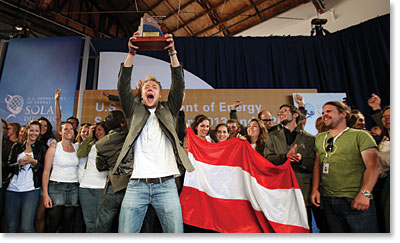 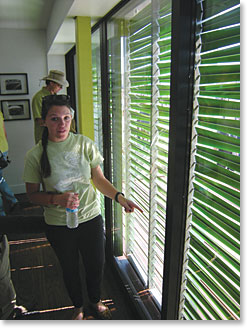 Ontario’s house, named ECHO, featured a 7.8-kW photovoltaic array of 30 panels, as well as four solar thermal panels to meet its energy requirements. A predictive shading system used an algorithm to calculate optimal shading on the south-facing glazing every hour, based on real-time weather data.

Part of Ontario’s innovation was a super-insulated building envelope made from vacuum insulation panels (VIP), which are used in refrigerators and microwaves by Panasonic.

“We built a test study at Carleton University and exposed it to winter conditions in Ottawa,” said Matthew Shiedel, systems manager for Team Ontario. The effective R-value, or rating for insulation efficiency, of the Ontario VIP system was R-53, better than twice that of a typical Ontario home, he said.

This drastically reduced the overall heating and cooling loads in the Ontario climate, and “gave us the opportunity to create an optimal, energy-efficient mechanical system,” he said. A solar-assisted heat pump regulated space heat, space cooling, and domestic hot-water requirements.

Solar houses designed to scale up

“Commercial facilities have similar requirements,” he said. They need to heat and cool by using passive technologies to get passive heating in the wintertime and passive shading in the summertime to reduce the cooling load on the buildings.

“The integration of the solar into the buildings really applies on a larger scale,” Peterson added, “not only to buildings but even facilities like colleges and universities with multiple buildings. You can integrate these technologies with good, efficient design.” 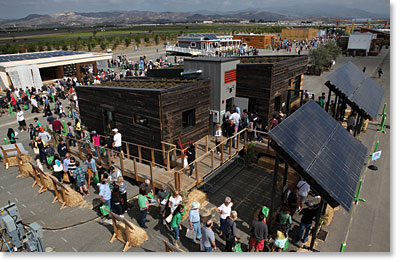 Student teams consisted of multidisciplinary groups of graduates and undergraduates. PhD student Sabrina Novalin, team engineer for the first-place Austrian entry, said that the different cultures of architects and engineers could sometimes clash.

“You always have to struggle with architects; I think that’s inherent in this kind of design challenge. Different things that are important to one person are not so important to the other person,” she said. Yet, “it’s been really cool to actually apply all the things you learned in school and put them in the great picture.

"To approach the entire project in this holistic way, it gives you a really good overview afterwards to get a feeling of what’s in the market and where the trends are going in the industry.”

SPIE student member Kimberly Hammer was the lead designer of the solar thermal system for the Team Las Vegas house, DesertSOL. She described her project in a video on the SPIE Photonics for a Better World blog.

The 60 evacuated tubes heat and circulate hot water to the home for showers and other plumbing fixtures as well as space heating via a radiant hydronic flooring system.

Besides a 6.75-kW rooftop photovoltaic system, the DesertSOL house sports a unique photonics-based feature: a patio screen laser-etched with an image of a mesquite tree, the only tree native to the Mojave Desert.

“We took that image, converted it to grayscale, and the percentage of gray within each pixel determined the diameter of the hole that was laser-cut,” Hammer said. “We’re really proud of those screens. They cast a nice mesquite-tree shade over the patio when you’re sitting there, so it’s very comfortable.”

Winners of the 10 Solar Decathlon categories were:

After the event, some of the solar houses are sold to recover costs or raise money for future teams. Most of the houses, however, are used for research and are put on display to raise awareness about sustainable design.

Team Capitol DC’s Harvest Home will be donated to Wounded Warrior Homes, to be used as a transitional residence near San Diego, CA, for a returning veteran from the US war in Afghanistan.

Peterson said the move to Irvine was “phenomenal” for the Solar Decathlon, although attendance estimates were lower than for previous years in Washington, DC. Besides having more sun, “California’s a great environment,” he said.

“The people who live in California are very married to environmental goals, and California really leads the world in some of the legislation, not only for climate change, but also for energy-efficient design of homes and commercial buildings.”

History of the DOE Solar Decathlon

Since the first competition in 2002, the US Department of Energy Solar Decathlon has provided unique training to approximately 17,000 students, preparing them to become innovators and entrepreneurs in clean energy technology and efficient building design.

The competition also shows consumers first-hand how to save money and energy with affordable clean-energy photonics products that are available today.

The international competition is open to universities and institutions of higher education worldwide with the challenge: “Design and build a solar house that is energy independent.”

The 2014 Solar Decathlon will be held in Versailles, France, 27 June through 14 July.

The SPIE Newsroom has three videos from the October 2013 Solar Decathlon on SPIE.TV.

–Rich Donnelly is the managing editor of the SPIE Newsroom and a producer for SPIE.TV.

The SPIE Newsroom covers the latest in optics and photonics worldwide, with industry technical reports on hot topics; video and news feeds organized around 13 technical communities such as solar and alternative energy, remote sensing, and biophotonics; updates on the latest photonics products; and links to news items in the trade and general press.

Technical articles and news announcements are added to the website daily. And options are available to receive monthly SPIE Newsroom e-mail alerts on specific topics or more frequent updates via an RSS reader.

Within the SPIE Newsroom, SPIE.TV also delivers video coverage from selected events and interviews with optics and photonics experts.