Technology from laser startup can solve many problems.

Tom Nugent and Jordin Kare have spent almost seven years advancing a technology that uses laser beams for wireless power and propulsion. Starting in 2007, they set out with a hand-picked team to meet the NASA Centennial Challenge in Power Beaming.

The competition centered on a practical demonstration of wireless power transmission, which could have a wide range of applications from lunar rovers and space propulsion systems to the space-elevator concept and airships above the Earth.

LaserMotive, the company they founded in 2007, won the competition in 2009 as the only team that drove laser-powered devices up a cable suspended from a helicopter more than a kilometer high, with power for the cable climber sent by lasers from the ground. The team then set out to apply the free-space laser technology to solve down-to-earth challenges, using NASA prize money of $900,000 to seed the new business.

The photonics entrepreneurs explored the aerospace, defense, and remote-sensing markets that required high powers and wireless technology, with the idea that they could extend into other markets as their capabilities advanced.

“You could use each market as a stepping stone to the next market and keep expanding the performance envelope for solving real-world challenges with the technology,” says Nugent, the company’s president and CEO.

Laser technology for many markets

The LaserMotive team took that original idea – free-space laser power to keep small, hand-launched aircraft and other unmanned aerial vehicles (UAVs) aloft for days instead of the few hours allowed by limited battery capacity – and validated the technology for additional applications and markets.

First, the team flew a multi-rotor copter for 12.5 hours on a five-minute battery in 2010 by powering and recharging the battery with a laser transmitter.

Then in 2012, in partnership with the Lockheed Martin Skunk Works, the LaserMotive team powered the Stalker UAV for 48 hours continuously by laser beam only in a wind tunnel and then powered it in flight in the desert, at altitudes up to 600 meters. Those flights used LaserMotive’s integrated, lightweight power-distribution system for charging the on-board battery while also powering the motors and controller.

“When we won the NASA competition,” Nugent says, “we had a specific power and distance performance envelope, having delivered 1 kilowatt of DC output power at half a kilometer of distance and more than 400 watts at a range of 1 kilometer.

“We expected that we would first develop products in that (wireless) power and distance class. But it has turned out that the most immediate market interest has been at lower powers and shorter distances.”

While working with private companies on the laser-powered flying robots, Nugent and Kare saw opportunities to deliver the laser power over fiber-optic cables. Since fiber-optic cable is lighter than copper wire, there was interest from the underwater community for a photonics solution, Nugent says. Initial designs for underwater power-over-fiber (PoF) led the team to their “InvisiTower” concept.

The PoF-driven tower takes the company’s free-space laser-power beaming system and sends laser light over non-conductive optical fiber to a vertical-takeoff helicopter, creating an instant land-based or floating tower that could be used for telecommunications relay by news outlets or military commanders or for rapidly deployable surveillance or communications for first responders. 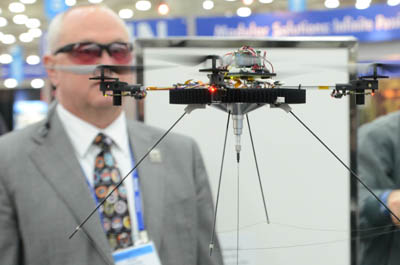 A small, demonstrator version of the InvisiTower system (above) showcased at SPIE Defense, Security, and Sensing in Baltimore in May 2013 and received a lot of interest for its applications in broadcasting, surveillance, and communications relay.

Also in early 2013, LaserMotive unveiled its first product on its website, posting information about a PoF unit that demonstrated technology able to efficiently transmit a few watts of power or as much as a few hundred watts over distances as long as 2 kilometers.

Nugent says LaserMotive had “people in unexpected industries approaching us, and people who are very happy to use the fiber-optic cable for electrical isolation.”

Just days after the photonics product appeared on the website, LaserMotive began receiving inquiries from utility providers, railroads, aerospace companies, and research labs all over the world. Could the LaserMotive PoF system safely deliver electric power to high-voltage sensors and critical equipment in extreme environments?

“Connecting with some of these commercial customers involved some serendipity and shows that the time is right for solving power delivery challenges in key industries,” Nugent says. “Being able to provide unlimited energy without copper electrical wires opens up applications previously impractical or simply impossible.”

While LaserMotive had not anticipated interest from research labs and other market sectors, the team quickly worked to address the needs of these potential customers.

Even though the company tagline says, “Power delivery via laser,” Nugent says LaserMotive is able to deliver “complete end-to-end power solutions and integrate them with customer products.” Voltage regulation, power distribution, battery charging, and, of course, power transmission via laser, are all areas LaserMotive can manage and customize for customers.

Nugent says LaserMotive is refining its PoF product line to better meet the demands of customers in those markets who need electrical isolation due to high voltage or sensitivity to RF interference.

He can’t yet talk publicly about ongoing projects with global Fortune 500 companies, but he’s excited about the future.

“Long term, there are exciting applications for space propulsion and long-range power delivery to exploration robots on the moon and asteroids,” Nugent says.

For now, Nugent says he and his team are thrilled to be laying down the first, terrestrial “stepping stones” that lead to a bigger future. 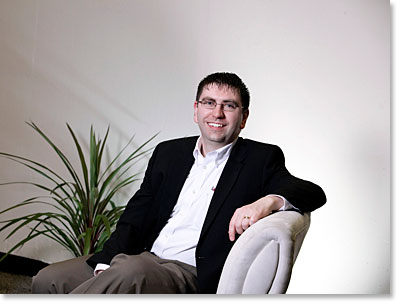 LaserMotive is a privately held company based in Kent, WA (USA), specializing in laser power beaming for commercial applications.

The photonics company was co-founded in 2007 by Jordin Kare, one of the foremost experts on laser propulsion, and Tom Nugent, former research director for the LiftPort Group.

Kare, who is LaserMotive’s chief scientist, had previously worked on the concept of using lasers to deliver power over extremely long distances, even to launch rockets into space orbit. He has a PhD in astrophysics from University of California, Berkeley.

Nugent, president and CEO, was involved in liquid-fueled rocket-engine development and testing through the Rocket Team at Massachusetts Institute of Technology where he received an MS in materials science and engineering. He also researched advanced-fusion propulsion for the Jet Propulsion Laboratory.

The company's achievements include:

In the 2012 demonstration, the Stalker performed well in the environment and flew both day and night without incident.